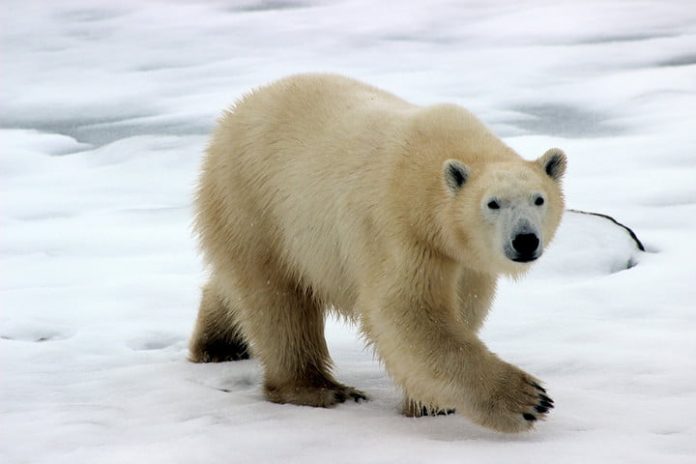 There’s an old aircraft hangar in Churchill, Manitoba, near Canada’s Hudson Bay. In the early 1980s, it was converted into 28 reinforced cells; you don’t want these inmates escaping. It’s the Polar Bear Holding Facility, but it’s also known as polar bear jail. Members of the rescue team will bring in bears that have been scavenging through trash bins or who seem unhealthy. Usually, after around a month, the bears are airlifted out of town.

This article is part of our continuing series, Women With Byte

Women With Byte looks at the many contributions women have made to technology past and present, the hurdles they faced (and overcame), and the foundations for the future they’ve laid for the next generations.

Polar bears shouldn’t be relying on human scraps to survive. They’re classified as marine mammals, because they spend much of their time on sea ice. They depend on the frozen seawater to hunt for seals and other prey. Polar bear problems aren’t just happening at Hudson Bay. You’ll also find them at the Beaufort Sea, north of Alaska. “You have this domino effect with the loss of sea ice there,” Dr. Cecilia Bitz told Digital Trends. The seals create breathing holes in the ice, then use the snow to build lairs for having pups. Warmer temperatures and rain can collapse the lairs, leaving the seals vulnerable and decreasing their population over time.

Dr. Cecilia Bitz, Chair of the Department of Atmospheric Sciences at the University of Washington Svavar Jónatansson

As the chair of the Department of Atmospheric Sciences at the University of Washington, Bitz studies sea ice and its role in climate change. Though she’s visited the Arctic several times, she can do most of her work from Seattle, using satellite images and other data to forecast sea ice. Agencies all over the world, including the National Weather Service, gather information on sea ice concentrations and ice thickness and input them into ensemble forecasts. These models bring together a variety of forecasts and see where they agree. “When you listen to a weather forecast, you’re getting probabilities,” said Bitz. “Usually it’s a chance of rain, and we do the same thing for a chance of this percentage or that percentage of sea ice.” Bitz and her team then try to predict the conditions up to six weeks out for 17 Arctic regions. Whether there will be a 70 percent chance of sea ice or 85 percent change is important for anyone traveling in the Bering Sea or Hudson Bay.

The ICESat-2 could lengthen how far out Bitz is able to predict sea ice, from six weeks to closer to its theoretical limit of six months. NASA launched the satellite just over a year ago. When its not using lasers to determine the volume of icebergs, ICESat-2 is measuring the height of sea ice around Greenland. Though NASA has been using planes to take these measurements for over a decade, Bitz calls the satellite “a huge, revolutionary change to the data we’re getting.”

The level of detail the ICESat-2 can provide is crucial for monitoring changes to sea ice. Satellite images can show differences in ice surface, whether it’s rough or smooth. The more glassy the ice, the newer it is. “You can imagine on a lake, when it refreezes early in the year, is really flat,” said Bitz. Older ice is more weathered, having undergone melt and refreezing cycles, getting battered and buffered about by wind and currents. Multiyear ice is rougher, while ice younger than a year is less bumpy. Sensors that measure the reflections from the surface of Earth, called scatterometers, allow scientists to see the differences between the two types. Scatterometer records from 1999 to 2017 show increasing areas of the Arctic Ocean covered by new ice; less than one third was covered by multiyear ice in 2017. Less and less ice is able to stick around during the summer, allowing it to become multiyear ice.

Bitz said it’s startling how much the amount of multiyear ice has shrunk, over 50 percent since 1999. Reliable satellite data for icy regions goes back to 1979, but there are ice-thickness measurements from submarine sonars from the late 1950s. Even before then, there are accounts from native communities. “The Beaufort Sea had no sea ice in October this year, which nobody can remember ever having happened,” said Bitz. Oral records can last centuries. When Arctic explorer Charles Francis Hall traveled to Baffin Island in 1860, his Inuit guides told him about other explorers and ships that had ventured to the area. They meant Martin Frobisher, who’d landed on the island nearly 300 years earlier.

The Beaufort Sea had no sea ice in October this year, which nobody can remember ever having happened.”

“I’ve never seen the Arctic with my eyes when it was healthier,” said Bitz. She said the anecdotal data she’s read and heard from native communities help her get a sense of what’s been lost. Once, they used sleds to travel across ice to get to neighboring villages. Traditionally, permafrost freezers would keep whale meat cold and safe from scavenging polar bears. Not anymore. “Talking to people, it’s pretty inescapable that we’ve never seen sea ice loss like this in human history,” said Bitz.

The connection between fossil fuel emissions and deforestation and the warming planet are irrefutable, said Bitz. “The only way we can stop climate change is if we stop emitting,” she said. Sea ice isn’t just an indicator of rising temperatures; it’s involved in the feedback loop that amplifies it. The reflective nature of ice helps keep the planet cooler by bouncing the sun’s raise back. Melting ice leaves darker pools of exposed ocean that absorb the heat, turning the ice even slushier.

We can credit political cartoonist Thomas Nast with relocating Santa Claus to the North Pole in 1866. At the time, no one had reached it, so it made sense that it would take a dose of magic to reside there. To many, the Arctic may still feel just as unreachable, its ice issues as remote. Of course, this isn’t true at all. We’ll all feel the effects of warming and Alaska is part of the United States. “I think it’s important to remember that the U.S. is an Arctic country,” said Bitz.