DJI has built an app that lets anyone track nearby drones 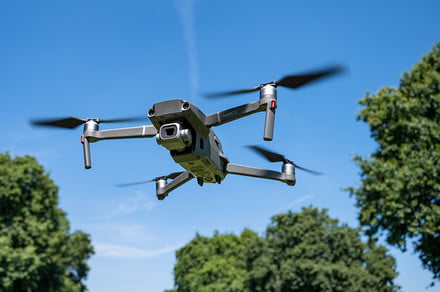 DJI is planning to release a free app that would let anyone with a smartphone track and identify drones flying nearby.

The app, which could launch in 2020 pending regulatory approval, would be capable of tracking a quadcopter or similar machine within a 1-kilometer (0.62 mile) range.

It would also display information such as the drone’s altitude, speed, direction of travel, and even the location of the operator. The aircraft’s ID number, if it’s been registered with the Federal Aviation Administration (FAA), would also appear. DJI said the app would track drones from multiple makers and not just its own devices, which include the popular Mavic machines.

The app has been designed to use the Wi-Fi Aware protocol for mobile devices, which enables a phone to receive and use the Wi-Fi signal directly from a drone without having to complete a two-way connection.

“Safety, security, and peace of mind”

China-based DJI said the app would offer “an easy way for anyone with a smartphone to monitor nearby drones for enhanced safety, security, and peace of mind.” For example, if drone deliveries one day become a thing, the app would provide reassurance to residents that the drone buzzing overhead is dropping off an order next door, and isn’t some ne’er-do-well trying to grab video footage of your back yard.

The proposed software also appears to be part of efforts to reassure the FAA that it’s doing what it can to make drone flight data more transparent and accessible, thereby reducing the chance of potentially restrictive regulation further down the road.

Indeed, Brendan Schulman, DJI vice president of policy and legal affairs, said in a release: “Around the world, aviation authorities have said remote ID is the key to allowing more complex drone use, and to solving concerns about safety and security. DJI’s direct drone-to-phone remote ID shows we’re committed to providing a solution in a way that is instantly usable worldwide without any additional infrastructure.”

With drone sales continuing to rise, the number of dodgy drone flights is sadly also on the up. While only a small percentage of people are thought to use their drones for such “rogue” flights, each offense can cause huge disruption. Major airports, for example, have been compelled to spend large amounts of money to protect their facilities from potentially dangerous incursions by the remotely controlled flying machines.

Technology for identifying drones in the sky is already available, but it’s mainly aimed at security and law enforcement and involves extra equipment and setup costs, while DJI’s app would be free, widely available, quicker to deploy, and easier to use.

Everyone knows the top-tier wireless service providers in Verizon, AT&T, T-Mobile, and Sprint. What about lesser known, or newer, brands like Tello, Mint Mobile, or Net10?Some of these companies might be a better fit for US consumers as they provide a more specialized package that fits their needs or budget. Let’s take a look at a relatively unknown carrier, TextNow.This guide will serve to help you understand what the MVNO offers and how it competes in the mobile arena.AboutTextNow is a somewhat newer player in the mobile space, having gotten its start back in 2009 as a Voice over Internet Protocol (VoIP) for making Wi-Fi calls. Today it operates as Mobile Virtual Network Operator that piggybacks on other cellular networks for coverage. It employs Sprint’s network for CDMA but it operates with its own plans and features.TextNow uses Wi-Fi for its preferred coverage, falling back on GSM or LTE for calls, text, and data. By going this route, it is able to offer much more competitive rates than traditional carriers. According to TextNow, its average consumer rate plan is just $19 per month.Rate PlansTextNow rate plans are no-contract, meaning you can go month-to-month with no long-term agreement, cancellation, or activation fees. It also offers a 30-day money back guarantee.TextNow does not charge for going over your allotted data. Hit your threshold and you’ll find your speeds slowed for the remainder of the billing cycle.Indeed, you can sign up for TextNow and have access to nationwide calling and texting at no cost. You’ll get all the standard features like call forwarding, caller ID, and voicemail, but you’ll see ads within the TextNow app.TextNow’s paid plans range from $10 to $40 per month, and remove advertisements. Included in the $20 and $40 options are set amounts of high speed data over the CDMA (Sprint) network. Moreover, consumers can also take advantage of mobile hotspot or data sharing.$10/month: Unlimited Talk and Text$20/month: Unlimited Talk and Text with 2GB of high-speed data$40/month: Unlimited Talk and Text with unlimited high-speed data*Those who go over 23GB of high-speed data in one month may see their speeds slowed for the remainder of the billing cycle. This is a small segment of users, to be sure, but still worth noting.Any other TextNow features worth noting?TextNow offers affordable international calling to a wide array of countries. Examples include 2.2¢ per minute to China and 1.8¢ per minute to India.Customers can add credits to their account by completing an offer, installing other apps, sharing to social media, or watching ads. Credits vary but an example might be 2¢ credit for viewing a 30-second advertisement.Handset SelectionTaking a look at the current lineup of phones offered through TextNow we find just a small handful of models from LG, Motorola, and Apple. The handsets definitely skew toward the lower end of performance but that doesn’t mean they are not capable devices.Which carrier has the best value at $50 a month?Which major prepaid carrier has the best $40 rate plan?Selection includes the Motorola Moto E5 Play, Motorola G7 Play, and LG Stylo 4 Plus.Bring Your Own DeviceFeel free to use any existing Sprint phone just so long as there’s no unpaid balance on another network. You can also, of course, bring an unlocked device, too.
Read more

It's cheaper and prettier, but is it actually better than the third-gen Nest Learning Thermostat?
Read more

The Apple Watch SE is on sale in an early Black Friday deal from Amazon that brings the price of the 44mm version of the GPS + Cellular model down to $310.
Read more