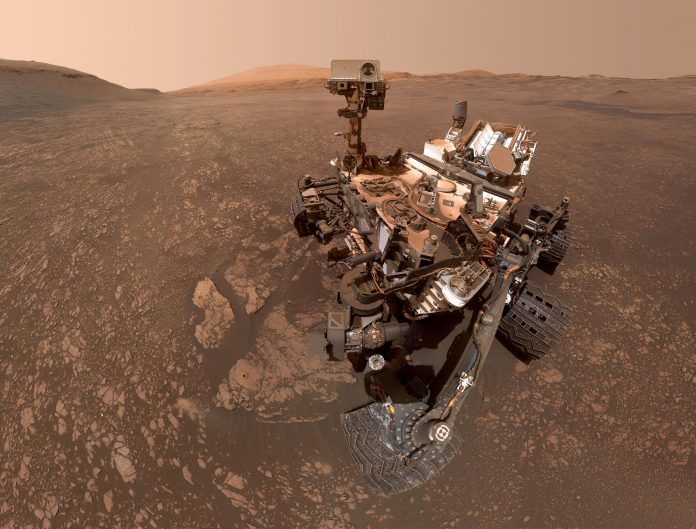 NASA’s Curiosity rover continues to make discoveries that challenge our understanding of the Martian environment. The latest strange puzzle taxing scientists is the variation of oxygen levels on the planet’s surface, as detected Curiosity’s portable chemistry lab, Sample Analysis at Mars (SAM).

In its journey around the Gale Crater, Curiosity discovered the Martian atmosphere has a composition at the surface of 95% by volume of carbon dioxide (CO2), 2.6% molecular nitrogen (N2), 1.9% argon (Ar), 0.16% molecular oxygen (O2), and 0.06% carbon monoxide (CO). The nitrogen and argon levels follow a predictable seasonal pattern, changing relative to the amount of carbon dioxide. The levels of oxygen, however, didn’t conform to expected patterns, rising by as much as 30% over spring and summer.

The varying oxygen levels have scientists perplexed. “The first time we saw that, it was just mind-boggling,” Sushil Atreya, professor of climate and space sciences at the University of Michigan, said in a statement.

The scientists tried various hypotheses to explain the oxygen variation. They checked whether the SAM instrument was functioning correctly and looked at whether carbon dioxide molecules could be breaking apart in the atmosphere to create oxygen, but neither approach yielded results.

“We’re struggling to explain this,” Melissa Trainer, a planetary scientist at NASA’s Goddard Space Flight Center and leader of the research, said in the statement. “The fact that the oxygen behavior isn’t perfectly repeatable every season makes us think that it’s not an issue that has to do with atmospheric dynamics. It has to be some chemical source and sink that we can’t yet account for.”

One possibility is that the oxygen levels are related to another Martian puzzle: The fluctuating levels of methane on the planet. As well as expected seasonal variations in methane levels, Curiosity has detected spikes of methane of up to 60% at some times. Scientists still can’t explain this finding either, but they may have found a link between methane and oxygen levels: It seems like the two gases fluctuate together at certain times.

“We’re beginning to see this tantalizing correlation between methane and oxygen for a good part of the Mars year,” Atreya said. “I think there’s something to it. I just don’t have the answers yet. Nobody does.”

Although both oxygen and methane can be produced biologically, their presence doesn’t necessarily indicate life on the planet. They can also be produced chemically, by water and rocks. Curiosity can only detect the levels of the gases, not their origin, so the source of this mystery remains unknown for now.

The research is published in the Journal of Geophysical Research: Planets.