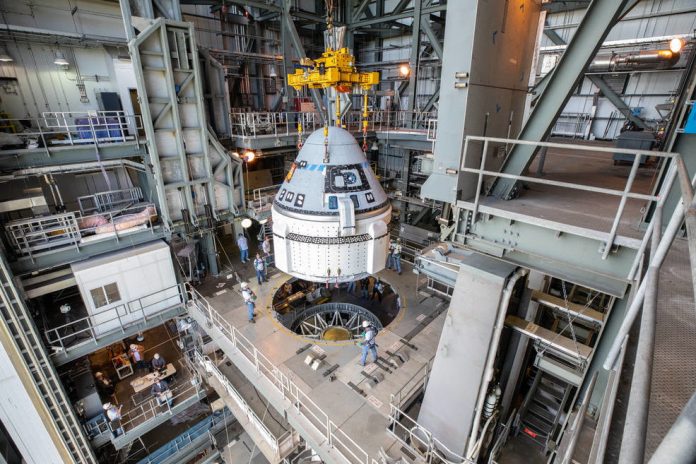 Things are heating up in Cape Canaveral, as Boeing’s new Starliner capsule is connected to the rocket which will launch it on its first orbital test flight in a few weeks’ time. The capsule will carry astronauts to the International Space Station as part of NASA’s commercial crew program.

You can get an idea of the complexity of infrastructure required for a launch by looking at the photo below, showing an alternative angle of the Starliner sitting atop the United Launch Alliance Atlas V rocket. United Launch Alliance is a joint venture between aeronautics companies Lockheed Martin and Boeing which provides launch services using either the smaller Atlas rocket or the larger Delta Heavy. The smaller rocket is no slouch though, with the Atlas V generating about 1.6 million pounds of thrust at launch.

One of the reasons that the commercial crew program has generated so much interest in the U.S. is that it will mark the first time crewed missions have launched from the country since the retirement of the Space Shuttle program in 2011. This makes it an important marker of international status as well as being an issue of national security.

“This is critical to our future as a nation,” Bob Cabana, director of NASA’s John F. Kennedy Space Center and himself a former NASA astronaut, said in a statement. “We’ve got to get astronauts flying on U.S rockets from U.S. soil, and this is just a huge step forward.”

Despite the enthusiasm on show from NASA officials, however, the commercial crew program has had its share of difficulties. The Starliner capsule has faced considerable delays, and SpaceX’s crewed capsule, the Crew Dragon, actually exploded during testing in April. Still, NASA remains optimistic that partnerships with private companies can help fund space exploration through commercial habitation programs in addition to the commercial crew and commercial resupply programs.

The next big day for the Starliner is December 17, when it will launch on its first-ever orbital test flight, which will be uncrewed.

Facebook
Twitter
Pinterest
WhatsApp
Previous articleGoogle Stadia review: This is the future of gaming, if you have the data for it
Next articleNASA scientists train to spot Martian fossils in the Australian Outback