Astronomers capture the best images yet of the Borisov interstellar comet 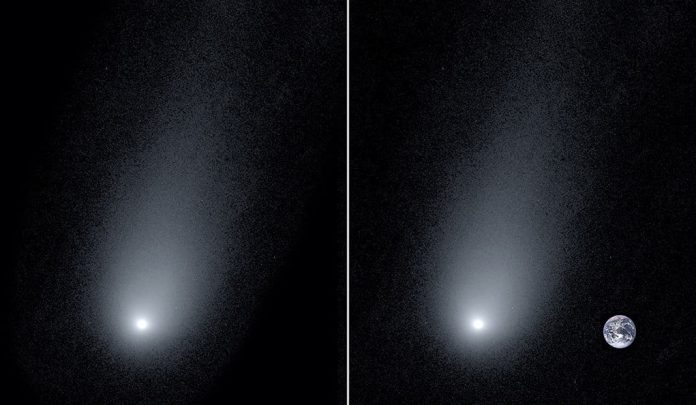 Astronomers have captured close-up images of the interstellar comet known as 2I/Borisov as it comes closer to our solar system.

The comet will come closest to us early next month, but by close, scientists mean about 190 million miles away. Yale astronomers have taken the opportunity of the comet’s relatively close approach to capture images, according to a Yale press release.

Astronomers Pieter van Dokkum, Cheng-Han Hsieh, Shany Danieli, and Gregory Laughlin captured the latest image of the comet on November 24 at the W.M. Keck Observatory in Hawaii. Based on the image captured, they have found that the comet’s tail is about 100,000 miles long, or about 14 times the size of Earth.

The team of astronomers even created an image of the captured comet next to Earth as a size comparison.

“It’s humbling to realize how small Earth is next to this visitor from another solar system,” van Dokkum said in the news release.

The comet 2I/Borisov was first discovered in August by amateur Ukrainian astronomer Gennady Borisov near the Gemini constellation.

Last month, scientists were able to study the comet even closer and found a thin cloud around it, which indicates cyanogen gas. The presence of cyanide in 2I/Borisov leads scientists to believe that other solar systems in the universe could be made up of the same things as ours, since comets in our solar system, such as Haley’s Comet, also demonstrate the presence of cyanogen gas.

However, the Yale astronomers are noticing that the gaseous comet is evaporating the closer it gets to Earth, which they say could be a reaction to the sun’s heat.

“Astronomers are taking advantage of Borisov’s visit, using telescopes such as Keck to obtain information about the building blocks of planets in systems other than our own,” Laughlin added.

The 2I/Borisov comet is closer and will stick around for longer than the first interstellar object that was discovered in 2017, which was named ‘Oumuamua. ’Oumuamua was already leaving our solar system when it was discovered — which means that scientists have more time to find out more about 21/Borisov and look for clues to other solar systems found in the comet’s composition.