Home News AMD Ryzen 4000: Everything you need to know
News

AMD Ryzen 4000: Everything you need to know 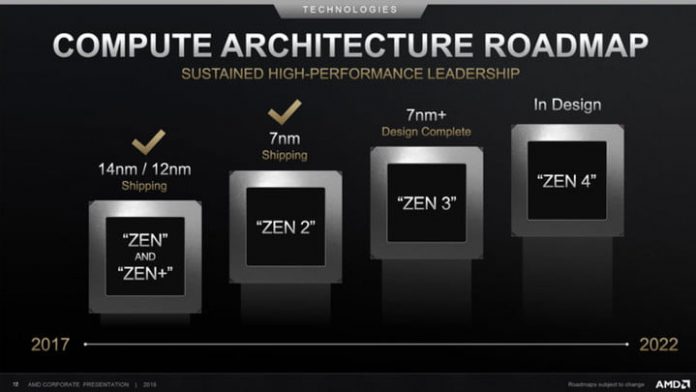 Ryzen 3000 CPUs were a landmark moment for AMD. But the next generation, Ryzen 4000, is already just around the corner.

Here’s everything we know about AMD Ryzen 4000 CPUs.

AMD’s CEO, Dr. Lisa Su, said in October 2019 that we could expect the debut of Ryzen 4000 CPUs in early 2020, with Zen 3 launching later in the year. That would suggest that like the past two generations of AMD processors, it will launch mobile chips in January (potentially with a CES reveal) followed by desktop chips in the latter-part of the Summer.

The first Ryzen 4000 CPUs will almost certainly be laptop processors built around the Zen 2 architecture at the heart of AMD’s Ryzen 3000 desktop CPUs. If the past two generations have been anything to go by, we should see modest versions targeting budget laptops, with stronger mid-tier offerings, and a couple of high-end options.

Desktop Ryzen 4000 CPUs will likely arrive later in the year, somewhere between July and October. They’ll be built on the new, Zen 3 architecture and have several performance enhancements. AMD hasn’t announced any models or pricing information yet, but we would expect a similar makeup to the current Ryzen 3000 series, with CPUs ranging in price from $100 APUs, all the way up to around $750 for the most heavily capable multi-threaded CPUs.

The best gaming focused processors will likely sit somewhere between $300 and $500.

Ryzen 4000 series CPUs, like Ryzen 3000 before them, will use a combination of two architectures throughout the range. The new Ryzen 4000 mobile CPUs will leverage the existing Zen 2 architecture that combines a 12nm I/O chip with 7nm CPU and GPU chiplets to form the overall APU. Ryzen 4000 desktop processors will use the upcoming Zen 3 architecture, which makes further refinements on the design.

Zen 2 on Ryzen 4000 mobile chips will be a major upgrade over existing Ryzen 3000 mobile APUs based on the Zen+ design. It overhauls the architecture to use the new chiplet model, drops the process node size from 12nm to 7nm, and doubles L3 cache for all cores. If Zen 2 desktop chips are anything to go by, this should mean the first Ryzen 4000 laptops will feature a higher instructions per clock of around 15 percent and increased base and boost clock frequencies by several hundred megahertz.

Zen 3 isn’t such a drastic improvement, but it will bring some notable enhancements. It’s based on the 7nm+ process node from TSMC and is made using the new extreme ultraviolet lithography process, which should improve the efficiency of the chips, but also lower production costs. The latest speculation suggests that Zen 3 will deliver 20 percent greater transistor density than Zen 2, as well as reduce power requirements by 10 percent.

In October, WCCFTech reported that Zen 3’s improvements will include lower cache latency and higher infinity fabric speeds. That would help increase the IPC (instructions per cycle) by 8% over Zen 2 and deliver an additional 200MHz per core.

The Ryzen 4000 mobile CPUs should see a significant performance uplift over their Ryzen 3000 counterparts. We saw AMD’s move to 7nm Zen 2 deliver inter-generational improvements of between 15 and 20% for single-threaded tasks, and 25-30% in multi-threaded scenarios. That was most notable in games, where the increased cache helped deliver 20-30 percent uplifts in frame per second and huge improvements to the lowest 1% and lowest 0.1% frame rates. That meant much greater consistency and frame rate stability.

That will likely be the case with Ryzen 4000 Zen 2 chips too, aided by by what will probably be Navi graphics on board. These graphics have the potential to be noticeably more capable than the current-generation onboard Vega graphics. Together, they should make Ryzen 4000 APUs great entry-level gaming laptops. They will compete against Intel’s new Ice Lake mobile processors with its impressive Iris Plus integrated graphics.

A leak at the start of November delivered some interesting information about the Ryzen 4000 mobile chips revealed, too. AMD is seemingly bringing a broad range of APUs to market, including high-end Ryzen 9 variants to go after Intel’s Core i9 on laptops. That means we’ll likely see higher core counts on mobile too.

Zen 3 improvements on desktop Ryzen 4000 CPUs won’t be quite so dramatic. With the architectural advancements, we’re expecting a roughly 10% increase in performance over Ryzen 3000 desktop chips, maybe as high as 15% in some cases. The IPC uplift is notable, however. Since that applies to both single-threaded and multi-threaded settings, it should close the gap with Intel in gaming even further. Although Ryzen 4000 will have to compete with 10th-generation, 14nm Comet Lake CPUs, it should do so favorably, and may be a more capable line of gaming chips.

One of the best features of AMD’s Ryzen CPUs has been their inter-generational support of the same AM4 socket. That’s meant that those who bought first generation Ryzen CPUs and motherboards, have been able to upgrade their processors without the need to buy a new motherboard — they just need to update the BIOS. That will be the case with Zen 3 Ryzen 4000 processors too, though this will be the last generation of Ryzen chips to use the AM4 socket. Ryzen 5000, expected in 2021, will move beyond AM4 to a new socket design.

There will be a new motherboard chipset to support the new Zen 3 chips out of the box, but we don’t have any details on what, if any major new features we can expect from it.

In November 2019, we’ve only just seen the reveal of Threadripper 3000 CPUs, so details about Ryzen 4000 Threadripper CPUs are almost non-existent. We will have to wait and see what fourth-generation Ryzen Epyc server CPUs are like before we can guess at the capabilities of Threadripper 4000 CPUs.

Like Threadripper 2000, however, we would expect a more modest improvement in single-threaded performance, though whether we’ll see a similarly dramatic increase in core counts remains to be seen.