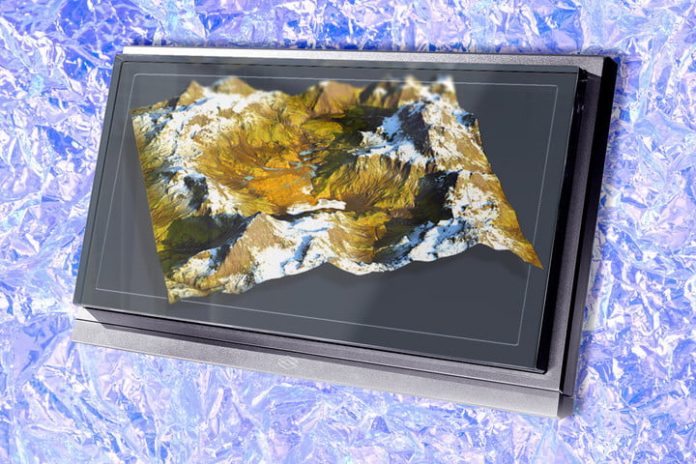 For a generation of kids, Back to the Future Part II defined how they, well, thought about the future. From flying cars and hoverboards to self-lacing shoes and dog-walking drones, the movie sparked tens of thousands of dreams about how the coming decades would play out.

One of the kids watching the movie was a young Shawn Frayne. The scene which most appealed to the 8-year-old Frayne was the one in which a snapping holographic shark (an advertisement for Jaws 19) tries to swallow Marty McFly as his walks past a “Holomax” movie theater. By his own admission, from that point on Frayne was “obsessed” with holograms.

A decade after Back to the Future Part II was released, Frayne was studying physics at MIT. “I searched everywhere for the dynamic holographic displays from the sci-fi movies I loved growing up,” he told Digital Trends. “Only to learn that they didn’t exist yet, even at the world’s top labs.”

Jump forward a few years, and Frayne decided to change that. Joining forces with Alex Hornstein, another man who shared his vision, he co-founded a company called Looking Glass Factory with the express goal of building real life holographic displays; ones which were capable of offering volumetric three-dimensional holography without requiring users to don any kind of augmented reality headset to be able to see the effect.

The company has now announced that it is bringing to market the world’s first 8K holographic display: an astonishing 33.2 million pixel beast with a billion-count color depth. At 32-inches, it’s not just the world’s largest holographic display, but its highest fidelity, too. Without any of the head tracking required for VR or AR headsets, the display is capable of showing three-dimensional holographic images which literally look as though they’re bursting from the screen; projected into what you might think of as a fishtank of pixels.

Reproducing the world in 3D

Greg Castle, the first investor in Oculus and a managing partner at venture firm Anorak Ventures, calls it the “most mind-blowing thing I’ve seen since I first tried the Oculus prototype.”

“The Looking Glass 8K reproduces not only the true dimensionality of the real world but also critical details that are impossible to capture with 2D screens, like the glisten off of a character’s eye or the specular reflections off of a puddle in a virtual world,” Looking Glass Factory enthuses in its press materials.

So how exactly does it work? Well, in a word: cleverly. As Frayne points out, every pixel display that’s ever been created up to this point measures pixels in only two dimensions: brightness and color. The real world is a bit more complex. In addition to these properties, the light bouncing around in the real world also has directionality.

“The Looking Glass 8K [adds this] through our proprietary light field technology, which effectively generates at least 45 distinct and simultaneous perspectives of a three-dimensional scene at 60 frames per second,” Frayne said. “This means that groups of people can gather around the Looking Glass 8K and see a unique stereoscopic view of virtual content just as they would if they were looking at a real scene in the real world.”

The future of displays?

To imagine what this might mean, visualize the difference between watching a movie on a flat screen and watching a live production. Sit on the furthest seat to the right or left of a movie screen and you’ll have, in essence, the exact same viewing experience as the person sitting in the center of the theater. Sure, you might have to crane your neck a bit more, but you don’t see more of the side of Brad Pitt’s face because of where you’re sitting.

When it comes to a stage play, concert or sports game, however, things are different. Your viewing experience changes depending on where you sit, so every seat gets a slightly different viewpoint compared to every other attendee. This might sound obvious, but it’s a radically different way of thinking about entertainment on a screen. Perhaps the closest comparison would be virtual worlds in a multiplayer video game, in which each player experiences the same shared world, but from differing perspectives.

Whether this is the future of displays as we know them remains to be seen. Certainly it could be an attention-grabber in the marketing world, but I’m unsure whether film will ever break free of its obsession with fixed view perspectives for something a bit more like the Broadway experience. Frayne thinks the appeal of Looking Glass 8K will extend far beyond just entertainment, though. It could, for example, allow doctors to view a medical scan in three dimensions, being able to move their heads to view it from different angles. They could use this to communicate sophisticated concepts to patients, such as the complex 3D structure of the inner ear, without having to suddenly stop the consultation so that everyone can don special headsets.

“We also expect this will have a profound impact in areas like mapping and computational chemistry for the same reasons we’re seeing the interest in 3D medical imaging,” he continued. “[That is to say that] information displays haven’t kept up with the increasing complexity of the information that professionals in these fields are working with.”

Ultimately, he’s hoping the applications will be myriad, whether they’re serious enterprise problem-solvers or, heck, scaring the bejesus out of a kid with a snapping shark advertising the latest blockbuster.

“Our end goal is broader, to eventually make holographic display ubiquitous in people’s lives,” he said. “This means that one day holographic displays will go consumer. I believe that the future of holographic communication, for instance, where you can have two holographic displays like the Looking Glass 8Ks working together as a window between two places across the world — that future is much closer than most folks might think.”

Demo units of the Looking Glass 8K are currently being shown off in Brooklyn, Hong Kong, San Francisco, and Tokyo. Shipping of the pre-order production models will commence in Spring 2020. The 8-year-old kid version of Shawn Frayne, staggering starry-eyed out of a movie theater with his future mapped out, would be very pleased!