The Medusa merger galaxy is the site of a galactic mystery 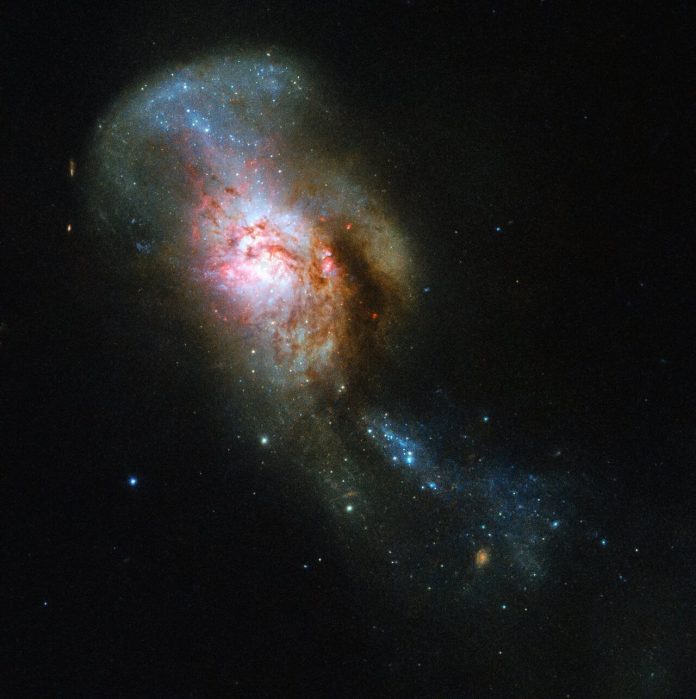 This Hubble Picture of the Week shows a galaxy with an especially evocative name: The Medusa merger. ESA/Hubble & NASA, A. Adamo

This week’s Hubble image features a legendary monster: The Medusa, who gave her name to the merging of two galaxies which are now known as one entity, the Medusa merger. Located 130 million light-years away in the constellation of Ursa Major (The Great Bear), this merger was created when one larger galaxy collided with a smaller system rich in gas and devoured it, sending out sprays of dust and stars.

It is these streams of dust spreading out into space that gave the galaxy its name. If you look in the top part of the upper section of the galaxy, you can see red strands reaching out into space. These dusty tendrils were thought to resemble snakes, like the snakes which the monster Medusa had on her head in place of hair in ancient Greek mythology. It was said that anyone who beheld Medusa directly would be turned to stone, until the hero Perseus defeated her using a mirrored shield which let him see her reflection.

Like the Gorgon of legend, the Medusa merger also has its own eye. Looking into the region at the center of the merging galaxies, known as Medusa’s eye, won’t turn you into stone but it will let you observe a region of active star formation, in which dust and gas are becoming dense and hot and are creating new stars.

The eye region is unusual in that the gases that flow there are much hotter than similar regions in other galaxies, with temperatures reaching over 300 degrees Kelvin (27°C or 80°F). This high temperature heats the nearby dust and causes it to glow with a shorter infrared wavelength, or a more reddish tinge.

Astronomers have proposed two reasons that this could be the case in this particular region of this particular galaxy: Firstly, it could be that the gas which is flowing toward the hotter, denser center of the galaxy experiences shocks when it collides with the interstellar medium inside the eye, heating the gas to higher temperatures. Or secondly, the shocks could be the result of a supernova or radiation from stars forming within a massive star cluster. To discover which of these is correct, scientists will need to take higher-resolution measurements of the galaxy and its red eye in particular.