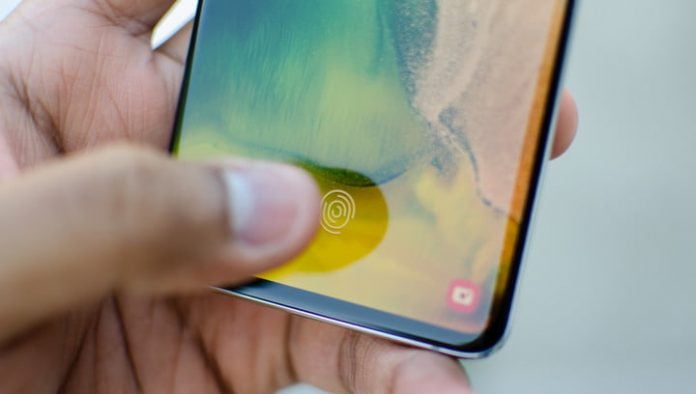 Samsung has confirmed reports the advanced ultrasonic fingerprint scanner on the Samsung Galaxy S10 and S10 Plus can be fooled by a simple film screen protector. Thankfully, Samsung has also stated it will push out a software update to fix the issue as quickly as possible.

The issue was first raised in a report from the British newspaper, The Sun. According to that report, adding a simple film screen protector from eBay allowed any fingerprint to unlock one woman’s phone — including her own unregistered left thumbprint, her partner’s fingerprints, and even a relative’s prints.

It’s currently unclear exactly how the S10’s ultrasonic sensor is being fooled by the screen protector, but it likely has something to do with how the scanner itself works. Unlike a conventional optical fingerprint scanner, which optically matches a fingerprint, the S10’s sensor uses ultrasonic waves to detect a fingerprint in full 3D, including the unique depth of a print’s ridges. Such a method was assumed to be more secure, with nothing less than a 3D-printed fingerprint being required to fool it previously.

It seems safe to assume that putting a barrier between the display and the print being scanned causes some sort of malfunction in the scanner itself, and it seems likely that any Galaxy S10 screen protector would cause the same reaction. When the S10 was first released, a lot was made of screen protectors that worked with the new finger-scanning tech, with Samsung helping accessory manufacturers to create compatible protectors. Now, it seems unclear where the ground lies — at least until the patch is released.

Samsung has warned users with screen protectors to turn off the fingerprint scanner and move to a different unlock procedure for the time being. You can do this by opening your Settings app, then tapping Lock Screen > Screen lock type. Enter your PIN, password, or pattern to confirm, then tap the switch next to Fingerprints to turn off the fingerprint scanner. Then you just need to select another unlock method from the list. It would be best to leave it off until Samsung has confirmed the issue has been fixed. Unfortunately, there’s no mention of whether this issue also affects the Galaxy Note 10’s ultrasonic fingerprint scanner.

No budget? No problem. These free PC titles prove that you don't need to spend money for high-quality games.
Read more
News

PS5 is looking to have a diverse lineup of games come next year.What you need to knowTemtem is a creature-collection
Read more
News