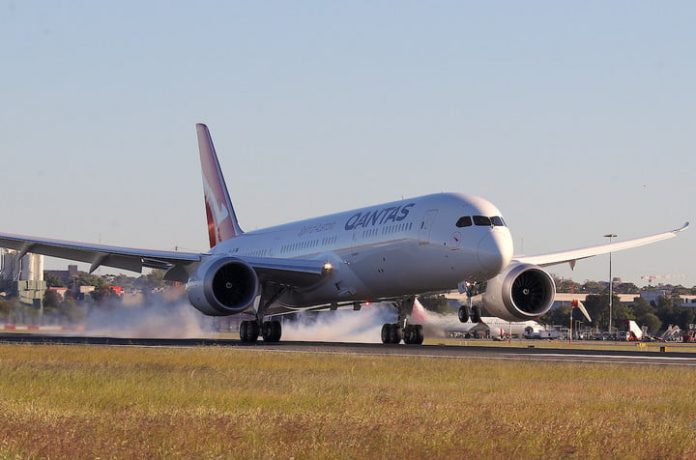 Qantas has just completed the longest-ever trip by a commercial airline with a 19-hour-16-minute direct flight from New York City to Sydney.

But the trip didn’t mark the launch of a new scheduled service by Australia’s national carrier. Instead, the flight was used to research how passengers and crew handle the demands of ultra-long-haul travel. It’s part of a broader initiative called Project Sunrise that’s geared toward the launch of two commercial routes in the next couple of years, namely Sydney-New York City, and Sydney-London.

As the aircraft used for the weekend’s record-breaking flight doesn’t have the range for such a long journey when fully loaded, the plane included just 49 passengers and crew, with only carry-on luggage allowed.

According to one of those on board the Sydney-bound flight, each passenger had a business-class seat and was asked to complete multiple alertness tests on tablets during the journey, as well as before and after the flight. Exercise classes were also offered to prevent stiff limbs and, more importantly, to lower the risk of deep vein thrombosis. The aircraft’s four pilots, meanwhile, were fitted with sensors to measure their brain activity during the trip.

When the Dreamliner arrived in Sydney on Sunday, Qantas CEO Alan Joyce said: “This is a really significant first for aviation. Hopefully, it’s a preview of a regular service that will speed up how people travel from one side of the globe to the other.

“We know ultra-long-haul flights pose some extra challenges, but that’s been true every time technology has allowed us to fly further. The research we’re doing should give us better strategies for improving comfort and wellbeing along the way.”

Qantas’ current service between New York City and Sydney takes 22 hours and 20 minutes, with one change for refueling, so a non-stop flight between the two cities would save passengers three hours — though they’d have to be cool with staying inside a plane for almost an entire day.

With air travel coming under increasing scrutiny from environmentalists, Qantas was keen to note that carbon emissions from all of its Project Sunrise test flights will be offset.

If Qantas eventually launches scheduled services between Sydney and both New York City and London, it’s likely to use a variant of the Airbus A350 or Boeing 777, both of which will have the range to complete the mammoth trips on a commercial basis.

The longest commercial flight currently in operation is the Singapore Airlines service between Singapore and New Jersey’s Newark Liberty International Airport, which takes about 18 hours and 45 minutes.

Go Into The Unknown two weeks earlier than originally anticipated.What you need to knowFrozen 2 was originally scheduled to arrive
Read more
News

Keep your tabs organized.Google has decided to release a new feature to Chromebook owners and general Chrome users who have
Read more
News

Go Into The Unknown two weeks earlier than originally anticipated.What you need to knowFrozen 2 was originally scheduled to arrive
Read more

Keep your tabs organized.Google has decided to release a new feature to Chromebook owners and general Chrome users who have
Read more

Your smartphone's camera does a lot of work to make your photos look the way they do. Onboard software takes
Read more