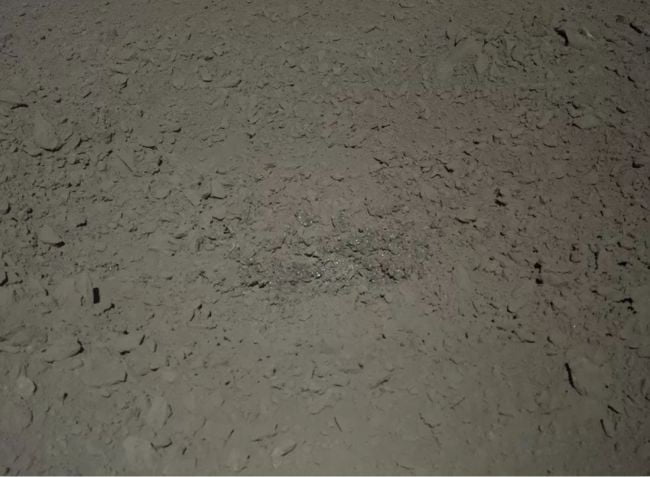 Earlier this year, China’s space program generated considerable intrigue and lots of jokes about the 1958 movie The Blob when it announced it had discovered an oddly-colored “gel-like” substance of unknown origin on the far side of the moon. As part of its Chang’e 4 lander mission, a small rover called Yutu-2 has been exploring the lunar surface and stumbled across the odd material. Now, the China Lunar Exploration Program has released a photo of its strange find which shows more details about what the substance could be.

As reported by Space.com, the original image, captured from the edge of a small crater on the far side of the moon, was shared by Our Space, a Chinese space site:

Strange gel-like substance found on the far side of the moon. CNSA/CLEP

It’s a little hard to see, so NASA scientist Dan Moriarty of the Goddard Space Flight Center in Maryland enhanced the image by increasing the contrast and desaturating the colors to show the substance more clearly:

Enhanced image of the gel-like substance, supplied to space.com by Dan Moriarty/NASA GSFC

With this closer view, experts are more confident that they can identify the substance. Originally it was believed to be glass, which was deposited onto the moon by a meteorite and which melted to form the gel-like shapes. Now, looking at the image in detail, you can see that the substance fragments are of a medium size, with none appearing very large or very small, and that they are more rounded than angular with discrete edges. Also, they are not covered in dust or soil.

“What this tells us is that this material has a similar history as the surrounding material,” Moriarty told IFLScience. “It was broken up and fractured by impacts on the lunar surface just like the surrounding soil. It may have been excavated by the crater-forming impact, or it may be a breccia [a type of rock composed of fragments cemented together]. But we’re definitely looking at a rock — this much is pretty conclusive.”

It could be a glassy type of breccia rock, or it could be a gabbroic or basaltic rock formed by cooling magma. The fact that the material is in a crater also supports the idea that it was deposited by a meteorite which impacted the moon.