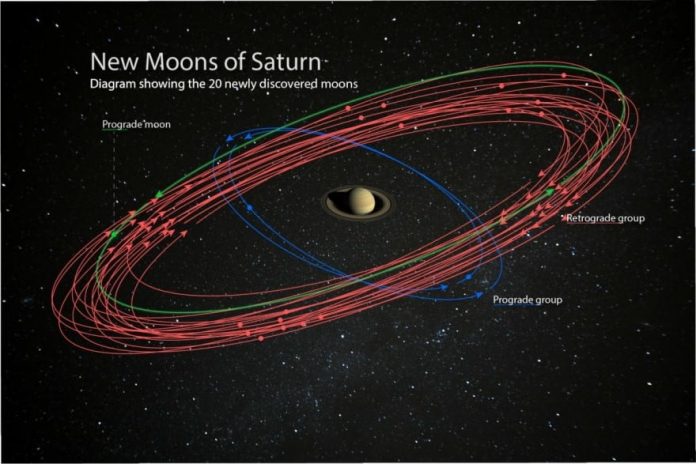 An artist’s conception of the 20 newly discovered moons orbiting Saturn. These discoveries bring the planet’s total moon count to 82, surpassing Jupiter for the most in our solar system. Illustration is courtesy of the Carnegie Institution for Science. Saturn image is courtesy of NASA/JPL-Caltech/Space Science Institute. Starry background courtesy of Paolo Sartorio/Shutterstock.

Astronomers using the Subaru telescope in Hawaii have discovered 20 new moons in orbit around Saturn. This brings the planet’s total number of moons to 82, making it the planet in our solar system with the most known moons. It has surpassed the previous “moon king,” Jupiter, which has 79 known moons.

Saturn’s inner moons have a complex relationship with its distinctive rings, as the rings deposit material on the moons making some of them ravioli shaped. In return, the moons affect the texture of the rings, making them clumpy. These new moons are further out from the planet though, taking between two and three years to complete an orbit.

All of Saturn’s new moons are approximately three miles in diameter, and 17 of them orbit the planet in a backward, or retrograde, orbit. You can see the orbit of these moons in red in the image above. The three remaining moons orbit in a prograde, or forward, orbit, with one nestled among the retrograde moons shown in green and two in their own prograde group shown in blue. By looking at the moons’ orbits, scientists can learn more about how the moons are formed and what the Saturn was like at the time they formed.

The discovery of the moons isn’t only relevant for our knowledge of Saturn, though. It can tell us about the formation of other moons and planets as well.

“In the solar system’s youth, the sun was surrounded by a rotating disk of gas and dust from which the planets were born,” Scott Sheppard, the leader of the team who discovered the moons, said in a statement. “It is believed that a similar gas-and-dust disk surrounded Saturn during its formation. The fact that these newly discovered moons were able to continue orbiting Saturn after their parent moons broke apart indicates that these collisions occurred after the planet-formation process was mostly complete and the disks were no longer a factor.”

If you’re inspired by the new lunar objects and have an idea for how to identify them, Carnegie Science is running a contest to name the moons. Saturn’s moon are traditionally named after mythological giants, and the scientists are looking for suggestions of names from Inuit, Norse, and Gallic mythology. You can submit suggestions by tweeting the names to @SaturnLunacy using the hashtag #NameSaturnsMoons before December 6.

A similar campaign was launched earlier this year to name recently discovered moons of Jupiter, with the public picking names from Greek mythology, including Pandia, Ersa, and Eirene. 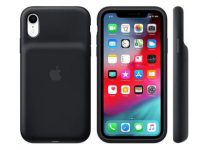 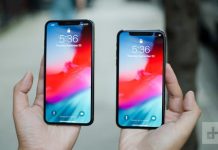 Apple quietly reduces trade-in value for iPhones, iPads by up to $100 Kuo: All 5G iPhones on Track to Launch in Fall 2020, Including Both Sub-6GHz and mmWave Models