Home News Republicans tried to bring phones into the SCIF room. Here’s why they...
News

Republicans tried to bring phones into the SCIF room. Here’s why they can’t 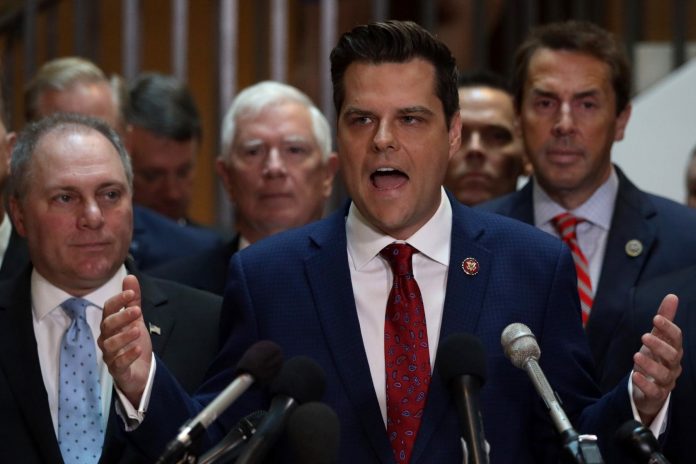 It’s called a Sensitive Compartmented Information Facility (pronounced skiff), and it has a no-phone rule. A group of Republican lawmakers may have violated that rule when they stormed a closed-door hearing Wednesday, October 23, allegedly bringing in cell phones.

“The facilities are carefully designed and controlled to ensure that electronic signals, surveillance methods, or other listening devices do not compromise the information discussed in these rooms,” tweeted Mieke Eoyang, a former staﬀ member of the House Permanent Select Committee on Intelligence. She notes that hackers can turn on a cell’s microphones without their owners’ knowledge.

Laura Cooper, the deputy assistant secretary of defense for Russia, Ukraine, and Eurasia, was scheduled to testify in front of the bipartisan House Intelligence, Foreign Affairs and Oversight committees. Some of the Republicans who disrupted the hearing tweeted about being in the room, then later said their staff members were sending the messages for them. In one video, though, Rep. Alex Mooney appears to be holding a phone up as he walks into the SCIF.

“You have to check your electronics,” said Rep. Lynn Westmoreland in a 2015 National Journal story about SCIFs. “There’s a guard out front. You just check your stuff, punch in your code or whatever you use to get in, and you just go in.”

“A SCIF is important to protect classified information from getting out,” said Rep. Dutch Ruppersberger in the same article. “The technology has developed so much today to the point where our enemies, our Russias, our Chinas, can penetrate right through [the wall] if there’s no SCIF.”

There are many uses for SCIFs, like reviewing secure documents. The Director of National Intelligence has strict specifications for them. The checklist requires information about its acoustical protection (so an outsider can’t overhear what’s happening inside), its exterior security, and access control. Anything from a hotel room to a trailer on George W. Bush’s ranch can serve as a SCIF, provided the proper security is put in place. They can be either temporary or permanent, like the White House Situation Room.

“Mike Conaway of Texas collected the electronics,” according to CNN’s Manu Raju. “All of us put our electronics in boxes outside,” Connolly said. “That SCIF is used by Congress for lots of highly classified purposes. To compromise that to make a point, is deeply troubling.” Following the disruption and before a hearing resumes, the room would need to be swept for electronic devices that would compromise the security of the SCIF.

The rules about devices in SCIFs are apparently so strict that one woman claims she was having difficulty getting permission to bring a breast pump into one.