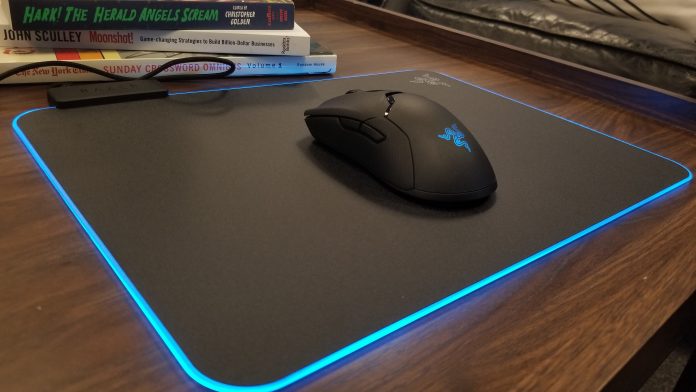 If you’re a gamer looking to spice up the look of your desk or setup with a rainbow and spectrum of colorful RGB lights, then Razer has you covered with the new Firefly V2 gaming mouse mat.

Not only is it a significant improvement over the original Firefly, this year’s V2 is even priced cheaper at $50. It packs in several enhanced features, including all-round edge lighting, and a built-in cable catch. While still keeping its ultra-wide (355 mm x 255 mm) signature micro-textured hard surface, it is also slightly thinner. Measuring in a 1mm thinner than the original Firefly, it is now easier for gamers to rest their wrists on the edges.

All around, the Firefly V2 has everything that it takes to be visually impressive and put on a light show. When its braided USB cable is plugged in, the Chroma RGB LED lights running along the mouse mat will cycle through a spectrum color by default. Lighting has been improved so that it’s no longer an underglow — it actually covers and expands across all four sides of the mat. There are a total of 19 zones of lighting, which is an improvement from the 15 zones on the original Firefly.

That all means the edges of the mat now illuminate almost the surface of an entire desk, even in the daylight. For further customization, the lighting can be tweaked in a total of up to 16.8 million color options, or set with several lighting effects via the Razer Chroma Studio and Razer Synapse 3 software. The mat can also be configured to react to in-game actions with some games like Apex Legends or Diablo 3. 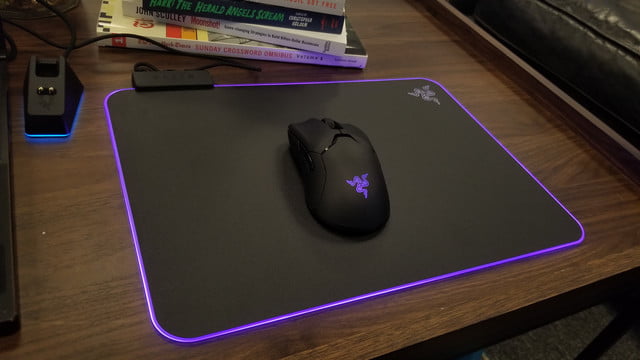 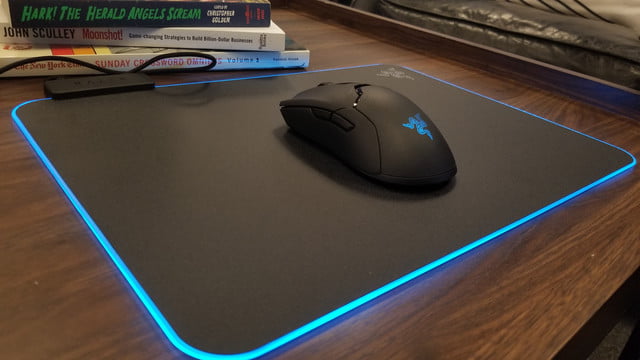 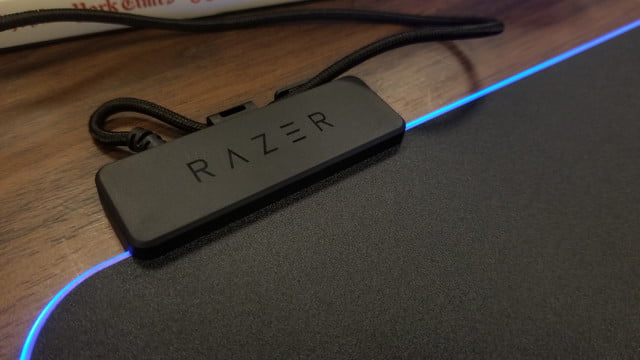 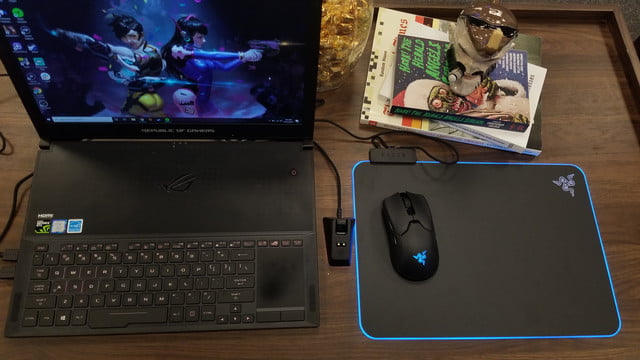 The most unique aspect of the Firefly V2 is the new cable catch. Since a gaming setup can get messy, this new cable catch can be found on the left side of the mat. It allows for a mouse cable to be looped inside, and is designed to reduce the cable drag from wired mice. That can be especially useful for games like Counter-Strike: Global Offensive, where every little in-game movement counts.

The hard surface of the Firefly V2 remains unchanged from the last generation, as does the non-slip rubber base. While the surface has a rough micro-texture, it still allows for a mouse to smooth drag across the top. Razer claims it is designed and optimized to provide the “perfect balance between control and speed,” since it has been ” tested to work with various mouse sensors and sensitivities.” Again, this is useful for getting a competitive advantage in fast-paced shooter and battle-royale style games.

However, like the original Firefly, the Firefly V2 is really just a mouse pad. There is no Hyperflux wireless charging as seen on the Razer Mamba Hyperflux + Firefly Hyperflux combo. The Firefly V2 is instead all about its thinness, brightness, improved chroma zones, and new cable catch.

The Firefly V2 goes on sale on October 30 at Razer’s online store.

HP continues to woo creative professionals with its latest laptop, the HP Envy 14 with a color-calibrated display.
Read more

HP's Elite Folio morphs its Spectre Folio consumer 2-in-1 into a commercial machine, converting to Windows on ARM and 5G.
Read more

At CES 2021, HP has announced its first attempt at wireless earbuds, the Elite Wireless Earbuds. These are designed specifically for remote work collaboration.
Read more