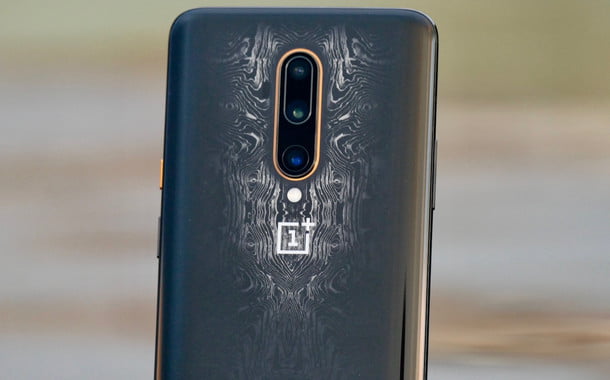 “With a design inspired by a hypercar you’ll never afford, the OnePlus 7T Pro McLaren Edition is as unique as it is powerful.”

It’s impossible not to admire the daringness of the brand new OnePlus 7T Pro McLaren Edition’s key design feature. The second special edition to be born from the partnership between smartphone brand OnePlus and automotive brand McLaren, it’s different to the clearly motorsport-derived OnePlus 6T McLaren Edition from 2018.

In what way? The famous papaya orange pop of color remains, but the carbon fiber has been replaced by, well, something else, and it’s going to split opinion. I’ve spent some time with the OnePlus 7T Pro McLaren Edition ahead of its unveiling to try and figure it all out.

What’s with that design?

OnePlus told me the special edition’s standout design feature found under the glass on the back is influenced by the astonishing $2.3 million McLaren Speedtail — a three-seater hypercar with a slippery, aerodynamic design that’s purpose-made to hit its 250mph top speed and still carry your luggage on a quick jaunt across Europe to your Italian villa.

The gloss black OnePlus 7T Pro McLaren Edition is sleek and smooth, but look closely and you’ll see an unusual and highly intricate design etched underneath the glass. Rather than a carbon fiber finish, the texture is more reminiscent of tree bark or an over-the-top tribal tattoo. It’s unexpected, and I’ve been puzzled by the link between it and the McLaren Speedtail since I first laid eyes on the phone.

I think I found the connection, but to see it, you have to get up close and personal with the Speedtail. I’m not one of the 106 lucky Speedtail owners, so instead I turned to Shmee150’s walkaround video, filmed at the car’s unveiling last year, for evidence. Look carefully and you can spot a similar design used on the Speedtail’s McLaren badge on the nose, and on the canopy control panel inside the car.

It’s about as insider as details get and not everyone is going to understand. Explaining anything about a design lowers its cool factor, and my guess is you’ll have to frequently explain why your McLaren phone looks like a dissected oak tree. Like it or hate it, you can’t ignore it. That’s the same deal with the flash of papaya orange around the side and around the camera lenses, which I think looks amazing as it catches the light beautifully.

Rather than a carbon fiber finish, the texture is more reminiscent of tree bark or an over-the-top tribal tattoo.

The phone comes with a McLaren software theme is installed, which adds a special wallpaper, icons, and accent colors across the standard dark mode-style operating system. I love the little details here, especially the new fingerprint animation, where you get a burst of orange and green as you touch the screen, which reminds me of flames from an exhaust pipe. Even the ambient lock screen’s clock has orange accents.

Visually, the OnePlus 7T Pro McLaren Edition is not what I expected at all, but the Speedtail is not a traditional type of car we’ve seen from McLaren either, so it’s rather fitting that we stand back and question the phone for a moment, too. Whatever your opinion, it’s a phone design that prompts conversation in a way that others simply don’t, and I love it for that.

What’s in the box?

The oblong box the OnePlus 7T Pro McLaren Edition comes in does have a carbon fiber-look, complete with more orange too. Lift the top and you find the phone, an orange braided USB Type-C charging cable, plus a black and orange McLaren-branded Warp Charge 30T power brick.

The latter is a key component as it enables the phone’s hugely beneficial fast charging speed. OnePlus said it can hit 70% capacity in 30 minutes, and that means you don’t have to remember or even bother to charge it up overnight. Thirty minutes in the morning, while you shower and eat breakfast, is more than enough. It’s a brilliant feature and a big selling point for all the new OnePlus 7T series phones.

Lift the box section up again to reveal a hidden compartment, inside of which is a special case for the phone. The design here is more traditional, with carbon fiber sides flanking a soft, tactile piece of Alcantara running down the center. The chrome-style finish on the OnePlus and McLaren logos makes them shine. If the tree-bark finish on the phone isn’t sporty enough for you, the case goes out of its way to satisfy.

There’s no point in partnering with McLaren if you’re not going to make the resulting phone both downright stunning and extremely fast. There’s no question the phone looks fabulous in its gloss black finish, which really emphasizes the curve of the screen, but what about the speed? The same Snapdragon 855 Plus processor found in the OnePlus 7T Pro and the OnePlus 7T is inside but here it’s paired with a massive 12GB of RAM.

It still feels as fast as the 7T Pro and 7T, but the extra RAM may come in handy down the road as apps get more complicated. Paired with the UFS 3.0 file system — which enables apps to open faster and content to be accessed quicker — there could be a slight increase in speed once the phone gets used a little more. Regardless, there’s more than enough speed and ability here for it to last you years.

The camera on the back matches the OnePlus 7T Pro, with a 48-megapixel main camera lens, a 16-megapixel ultra-wide lens, and an 8-megapixel telephoto lens. The pop-up selfie camera has 16 megapixels. You look at a 6.67-inch Fluid AMOLED touchscreen with a 90Hz refresh rate, which is arguably just as smooth and silky as the McLaren Speedtail’s body. The phone has Android 10 and OnePlus’ OxygenOS operating system installed.

Expect the McLaren Edition to operate and perform in almost exactly the same fashion as the standard OnePlus 7T Pro, as it more or less has identical components and hardware. It certainly feels the same in the hand; it’s comfortable to hold, but with enough weight behind it to make it feel substantial, and a superb build quality that’s worthy of both brand names.

Because design is the main reason to choose the OnePlus 7T Pro over the OnePlus 7T, if you’re going to splash out more based on how a phone looks, you may as well go all-out and buy the loudest version. In the land of OnePlus phones, that’s the McLaren Edition. You get everything offered by the OnePlus 7T Pro, with a bit more RAM and a lot more exclusivity. You may want to pick up a McLaren Speedtail at the same time to make explaining the pattern less of a chore though.

Hurry! Dell XPS 13 touchscreen laptop on sale for only $900

Life hasn’t slowed down one bit, and we’ve equipped you with some fantastic laptop deals to help you manage it. If you’re looking for a personal PC that’s light as air, utterly efficient, not too hard on the wallet, and ideal for transportation, we suggest you jump on this deal for $100 off the Dell XPS 13 Touch, marked down from $1,000 to $900 — while supplies last.
Read more
News

Save up to $260 on the Microsoft Surface Laptop 3, Surface Pro 7

The Microsoft Surface Pro 7 and Laptop 3 are on sale at Amazon and Best Buy today at up to $260 off.
Read more
News

New to PS4? You can’t go wrong with these titles!

If you just purchased your first PlayStation 4, you may find yourself feeling overwhelmed by the sheer volume titles. The
Read more

Hurry! Dell XPS 13 touchscreen laptop on sale for only $900

Life hasn’t slowed down one bit, and we’ve equipped you with some fantastic laptop deals to help you manage it. If you’re looking for a personal PC that’s light as air, utterly efficient, not too hard on the wallet, and ideal for transportation, we suggest you jump on this deal for $100 off the Dell XPS 13 Touch, marked down from $1,000 to $900 — while supplies last.
Read more

Save up to $260 on the Microsoft Surface Laptop 3, Surface Pro 7

The Microsoft Surface Pro 7 and Laptop 3 are on sale at Amazon and Best Buy today at up to $260 off.
Read more

New to PS4? You can’t go wrong with these titles!

If you just purchased your first PlayStation 4, you may find yourself feeling overwhelmed by the sheer volume titles. The
Read more