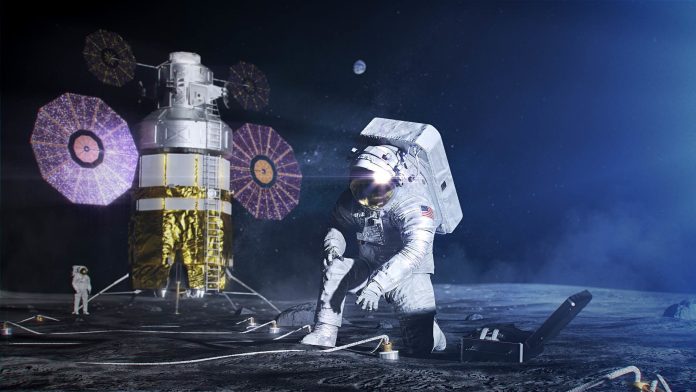 Artist concept of an astronaut in the xEMU space suit setting up a science experiment on the lunar surface. NASA

NASA has big plans for its upcoming Artemis mission: First setting up a long-term base on the moon, then sending a manned mission to Mars from there. On Tuesday, October 15, the agency showed off its new spacesuit designed for this ambitious mission at a presentation at NASA headquarters in Washington, D.C.

The Exploration Extravehicular Mobility Unit, or xEMU suit, is designed to protect astronauts against temperatures ranging from minus 250 degrees to plus 250 degrees Fahrenheit, which is important for planned missions to the moon’s south pole. Astronauts in the xEMU suit can move much more freely than was possible in previous suit designs and are able to cross their arms as well as raise them overhead. The suit also has bearings in the waist and the lower half, allowing greater motion which is useful for performing maintenance and other delicate tasks.

As part of the demonstration, an engineer wearing the new suit was able to bend to the ground and pick up a rock and then pass it. This sort of complex movement with bending at the waist would have been difficult or impossible in previous generations of suit.

Another factor to consider in suit design is pressurization, which is key for space missions but usually limits mobility considerably. The new suit operates at 8 pound per square inch of pressure, which is about the same operating pressure as a basketball.

“My job is to take a basketball and shape it like a human, to keep them alive in a harsh environment,” Amy Ross, a spacesuit engineer, explained. “We have to make the suit flexible under pressure. We use 100% oxygen to protect the astronaut from decompression sickness.”

The suits have equipment in the backpack to allow changes in pressure levels, which should make preparing for and executing spacewalks faster. The astronauts can lower the pressure levels when they need more dexterity, for example, if they need to move their fingers precisely to control a piece of equipment.

Another challenge is the issue of lunar dust — very fine particulate matter which is all over the moon. It wasn’t anticipated just how much of a problem the dust would be until Apollo astronauts found it covering everything. To protect against the dust, the new suits have fewer seams and covered seals.

Following issues with spacesuit sizing that caused the first all-female spacewalk to be canceled earlier in the year, NASA administrator Jim Bridenstine was sure to mention that the new suit will fit everyone on the upcoming mission. “We as the Artemis generation are building spacesuits that will fit all of our astronauts,” he said. “We want every person who dreams of going into space to be able to say to themselves that they have that opportunity.”