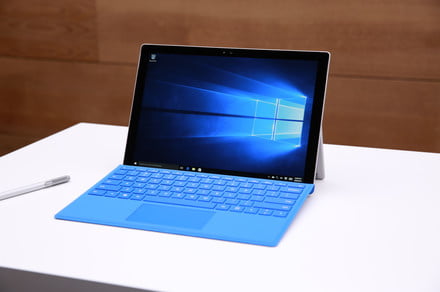 Microsoft’s annual hardware event kicks off Wednesday and as in previous years, the company is expected to introduce a slew of new hardware devices to its lineup. Products rumored to make an appearance include the Surface Laptop 3, as well as a revision to the Surface Pro’s stylus. Also possible is a reveal of the Surface Pro 7, which is rumored to have a borderless screen display and may ditch the “Pro” moniker from the product name. Most recently, reports indicate that Windows 10X, a new OS designed for dual-screen products, will also be revealed.

According to internet leaker Evan Blass, a dual-screen Surface product code-named “Centaurus” is rumored to be announced at this year’s Surface event. Although much is unknown about this dual-screen product, Centaurus has been theorized to be a hybrid of a tablet and a laptop, similar to Lenovo’s Yoga Book. Based on the contents of Blass’ tweet, the new product is expected to run Windows 10X, an operating system that has been previously referred to as Windows Lite.

Unfortunately, Blass had no pictures of the software in action; he claims that Windows 10X is designed to run on dual- and folding-screen devices. Previous reports hinted that Windows Lite would be a lighter iteration of the Windows 10 software, which hit over 900 million active devices last week.

Unlike Windows 10, it’s plausible that 10X might run applications in “containers,” meaning that the operating system would leverage virtualization of Windows 10 containers to run a significant amount of the computer’s applications over the internet instead of directly through the hardware. A previous mock-up made by Petri’s Brad Sams offered insight on an idea of what Windows Lite would look like, including the possibility of a modernized interface.

Regardless, should Windows 10X be officially announced at Wednesday’s event, it is improbable that we will see the operating system anytime soon, especially if it turns out that it will run on the Surface Centaurus, which may not even see a fall 2019 launch. In either case, we will just have to wait and see what Microsoft has up its sleeve tomorrow.

Don't hesitate on these opportunities to save on new and refurbished top-brand products during eBay's Flash Sale.
Read more
News

iOS 14 will be compatible with all iPhones and iPod touch models able to run iOS 13, according to information
Read more