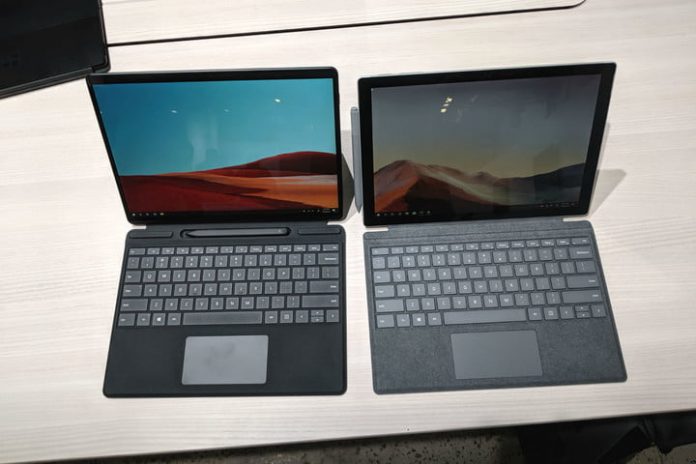 “The Surface Pro 7 is the smallest update to the line in years, but Ice Lake and USB-C are meaningful perks.”

The Surface Pro 7 wasn’t the flashiest new product announced at Microsoft’s recent hardware event, but it’s still the one you’re most likely to buy.

Featuring a redesigned kickstand and USB-C, this is perhaps the most minor updates to the Surface Pro in recent memory. It feels like Microsoft’s Panos Panay is giving it the cold shoulder. Not because the Surface Pro deserves it, but because it’s all grown up. It can take care of itself.

From the outside, not much has unchanged from last year’s model. The first thing I looked for, of course, was USB-C, and I was happy when I found it. It’s a direct replacement for the mini-DisplayPort, while the USB-A port and Surface Connect dock are still here. Hey, better late than never.

Port selection as a whole marks a difference between the Surface Pro 7 and the Surface Pro X, which cuts the USB-A port in place of a second USB-C port. Depending on your need and your willingness to use a dongle, you may prefer one combination of ports over the other.

The Surface Pro 7 has the same stout, robust design as the previous Surface Pro 6. It’s light, but feels sturdy. I still love the versatile kickstand and appreciate the beautiful display. Yet there are a few elements that feel outdated.

Bezel size is the most obvious. The Surface Pro 7 was expected to finally take care of that issue, but that design tweak instead was reserved for the more expensive Surface Pro X. That small change would’ve gone a long way towards making the Surface Pro 7 feel refreshed.

The Surface Pro 7 gets an overhaul when it comes to performance. It’s one of the few devices to use Intel’s new Ice Lake, 10th-gen processors. The switch over to Intel’s latest and greatest represents a meaningful change in a few different areas. Let’s talk graphics first.

On the top end, the Surface Pro 7 now has an option for Iris Plus graphics, Intel’s vastly improved integrated graphics. I’ve already tested it out on the Dell XPS 13 2-in-1, where it showed at least twice the performance of standard Intel UHD 620/630 in both 3DMark and actual games.

It’s not the same as a full, dedicated Nvidia RTX graphics card, like you’d find in the Surface Book 2, but it makes Fortnite playable with reduced settings at 1080p. With that being said, you’ll want to jump to the Core i7, which starts at $1,500. That price, of course, is still without the Type Cover or Surface Pen bundled in.

The other big change is in base configurations. Previous Surface Pros started at $799 with a Core i5 processor. But with the update to Surface Pro 7, the base price is now down to $749. Before you get too excited, though, you should know that buys a dual-core processor and comes with just 4GB of RAM. Most people will benefit noticeably from the jump up to the $899 Core i5 model.

The Surface Pro 7 is available for pre-order today, and will begin shipping on October 22.