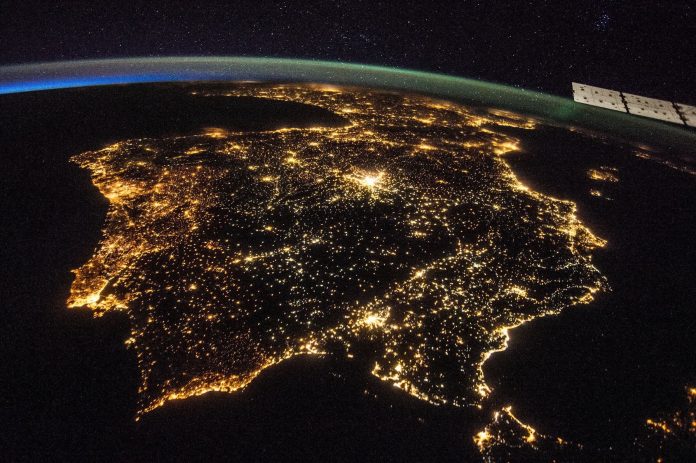 The Iberian Peninsula at night, showing Spain and Portugal. Madrid is the bright spot just above the center. NASA

Light pollution is an environmental issue that you might not think much about, but it can have serious consequences. From interfering with astronomical research to impacting both wildlife and human well-being, too much artificial light at night can cause a range of problems. To understand the scale of the problem, the European Space Agency (ESA) is promoting a program to catalog images of cities taken from space and is asking for the public’s help.

The Lost at Night project aims to quantify and map artificial light pollution caused by humans, especially around major cities. It uses high definition photographs of the Earth taken from the International Space Station (ISS). “The International Space Station is the best observation point humankind has for monitoring Earth at night,” Kevin Gaston, project leader of Lost at Night, explained to the ESA.

There are more than a million photos of the Earth taken from the ISS in the NASA Astronaut Photography of Earth archive, providing a potential treasure trove of data about light pollution.

However, there’s a problem. The majority of the photos in the archive are uncataloged, so they have no location information. Without labeling describing which location an image shows, it can’t be used for data analysis.

The Lost at Night project invites regular people to contribute to science by helping to catalog these images. Citizen scientists can look through the images and identify which cities they show, and they can perform this task better than machines can. “While computer algorithms have trouble distinguishing between stars, the moon, and cities, people are more reliable when it comes to recognizing patterns and analyzing complex images,” Alejandro Sánchez de Miguel, a research fellow at the University of Exeter, UK and the lead investigator of the project, said in to the ESA.

The website shows a number of options for which city could be shown in each image and shows maps as well as the night-time image. The system requires five people to agree on which city is shown to accept that labeling, in order to decrease errors. Then the images can automatically be cataloged by an A.I. and are available for researchers to analyze.

The project aims to identify a total of 90,000 images, which would be enough to train an A.I. to recognize cities itself. To contribute to the project and try your hand at identifying cities, head to the Lost at Night website.