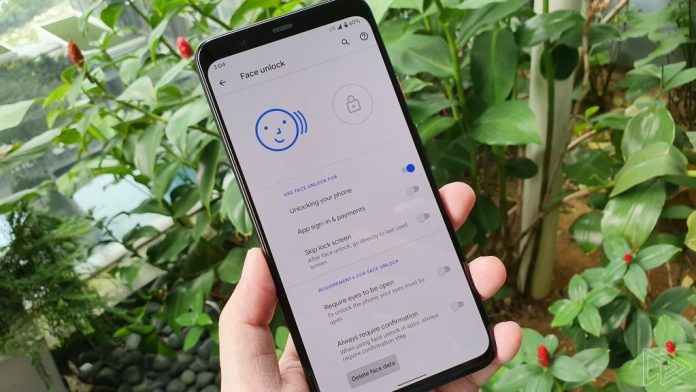 Google has said it will release a software update “in the coming months” that will let Pixel 4 owners require their eyes to be open for the phone’s Face Unlock security feature to work.

Image via NextRift
The acknowledgement follows last week’s discovery that the Pixel 4’s facial authentication system isn’t currently capable of distinguishing a face with eyes open versus eyes closed. The finding immediately sparked concerns that the phone could be opened by anyone simply by waving it in front of its sleeping / dead owner.

Google’s Pixel 4 Face Unlock feature replaces the fingerprint sensor and works similarly to Apple’s Face ID, which is found on iPhones and iPads that have a TrueDepth camera system. However, Face ID requires by default that the user’s eyes are open, although users can turn off this Attention Aware option in settings.

Previously, Google said that Face Unlock “is designed to get better over time with future software updates,” but stopped short of committing to deliver the “Require eyes to be open” toggle that was spotted in pre-launch leaks of the Pixel 4’s features. Now though, it wants customers to know that the setting is on its way. The company gave the following statement (via The Verge):

We’ve been working on an option for users to require their eyes to be open to unlock the phone, which will be delivered in a software update in the coming months. In the meantime, if any Pixel 4 users are concerned that someone may take their phone and try to unlock it while their eyes are closed, they can activate a security feature that requires a pin, pattern or password for the next unlock.

Despite the security implications of Face Unlock working even if your eyes are closed, Google still claims the feature “meets the security requirements as a strong biometric, and can be used for payments and app authentication, including banking apps. It is resilient against invalid unlock attempts via other means, like with masks.”