Google Pixelbook Go review: The Chromebook you should buy 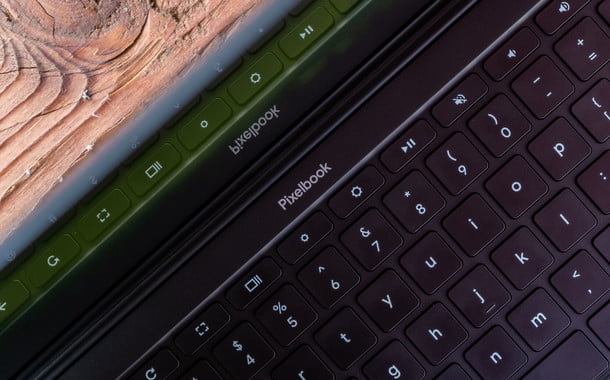 Google Pixelbook Go review: The Chromebook you should buy

“From the excellent build quality to the impressive speakers, the Pixelbook Go is the best Chromebook you can buy.”

The Pixelbook was an ambitious laptop. Google followed that up with the Pixel Slate 2-in-1 tablet, which was an even riskier endeavor.

The new Pixelbook Go? Not so much. It’s a simple, small laptop that doesn’t push Chrome OS to do anything it isn’t already good at. You’d be right to call it safe.

Still, this $649 Chromebook is the best you can buy.

The original Pixelbook felt fresh. The unique mix of aluminum and glass, accented by the two-tone color scheme wasn’t a MacBook clone like so many laptops these days. There was a movement to the design, your eye and hand drawn to the different aspects of the device.

I can’t say that about the Pixelbook Go. It’s a flat design with very few embellishments. The lid closely resembles last year’s Pixel Slate with its solid color and a subtle Google logo in the corner. The form factor itself is also far more conventional. It features a stand 13.3-inch screen in a pure clamshell design. While it does have a touchscreen, the hinge doesn’t rotate all the way around. You can’t use the Pixelbook Pen with it.

While the design is a lot less adventurous than the original Pixelbook, the Go is every bit as refined. It’s made entirely of a few chunks of magnesium, all held together with as few panels as possible. It’s just 0.5 inches thick and 2.3 pounds, and yet despite how portable it is, there’s no sign of bending, creaking, or flexing. That’s not something you can say for most laptops that start at $649.

The most interesting design feature is the ribbed pattern along the bottom. I like the ridged look more than I thought I would. It’s a clever way to make the laptop easy to carry while adding a unique look. That’s always appreciated.

I do have two beefs with the Pixelbook Go’s design. The first is obvious and counts among my pet peeves; big display bezels. They are thick, especially on the top, where the webcam and Google Assistant mics are housed. Huge bezels makes the Go look outdated, and alternatives like the new Samsung Chromebook 4+ and the Lenovo Yoga Chromebook C630 have fixed this issue.

Then there’s the color. Only two are available; Just Black and Not Pink. They’re both attractive, but they’re polar opposites. The Just Black model looks too formal, while Not Pink is too loud. More variety would’ve been nice.

Some might be disappointed into the limited port selection, but for a laptop like this, two USB-C ports is enough.

Your eyes have it

Screens are often the downfall of cheap laptops. Not so with the Pixelbook Go.

It has a glossy, 1080p display that’s colorful and bright. This is exactly what I want to see from an affordable laptop. It has a warmer tint than a Surface Pro or a MacBook, but it’s enjoyable for web browsing, watching videos, and everything else you might do on a Chromebook.

At 1,920 x 1,080, it’s a step down in resolution from the Pixelbook. It’s also now a 16:9 aspect ratio. I would have preferred 3:2 or even 16:10, but clearly Google wanted to stick with a familiar aspect ratio. A 4K “Molecular Display” model is on the way, though we don’t know quite when they’ll actually be available.

The typing surface is a short-travel keyboard that Google calls “Hush Keys.” It feels smoother than typing on a MacBook Pro, or even the Dell XPS 13 2-in-1. Actuation is softer, and it’s significantly quieter. In fact, it’s one of the quieter laptop keyboards I’ve typed on. Most importantly, the clumsy circular keycaps that debuted on the Pixel Slate are gone.

Google says it spent a lot of time fine-tuning the speakers, and it shows.

The glass touchpad is smooth and responsive, which is a big win for a laptop in this price range. And as mentioned, the display is a touchscreen, so you can waggle your finger across it when you’d like. Chrome OS now includes compatibility with many Android apps, and they feel more intuitive when using the touchscreen.

Audio quality is a rare treat. The speakers are upward-firing, crisp, loud enough to fill a large room, and even offer a bit of bass. I set them next to the industry leader, the MacBook Pro, and came away thinking the Pixelbook Go had it beat. I’ve never walked away from a laptop review wanting to talk about its speakers more than with the Pixelbook Go. Google says it spent a lot of time fine-tuning the speakers, and it shows.

$649 is affordable for a laptop, but it’s high-end in the world of Chromebooks. The typical Chromebook sells for $200-300, and includes paltry processors like the Intel Celeron or Pentium.

With the Pixelbook Go, options start at the Intel Core m3, an 8th-gen dual-core processor. That comes 8GB of RAM and a 64GB SSD. That doesn’t make you excited, but remember, this is a Chromebook. Unlike in Windows 10, dual-core processors in Chrome OS can perform admirably. Unless you’re someone who is always going to be plugged into a 4K monitor with fifty tabs open, the starting config should be plenty.

My review unit was the Intel Core i5 version. It’s also an 8th-gen chip, jumps up to four cores. I couldn’t find the limit of it in multitasking. It flew through web apps and hoards of browser tabs.

Would a 10th-gen chip from Intel have done better? Probably. Intel’s latest Iris graphics would’ve been nice to see here. Still, this is among the most powerful Chromebooks you can buy. A Core i7 model is also available if you need even more performance.

It’s the best battery life I’ve tested on a Chromebook yet.

For a student or someone who needs a laptop for travel, I think the $649 Core m3 model will be an excellent choice compared to the clunky, dated Windows 10 PCs that are often available at that price.

There’s a lot to like here. However, there’s also a few missing features.

First, there’s no form of biometric login. No fingerprint scanner, no facial recognition. Nothing. That’s a bit of a bummer, as Google just debuted its Face Unlock tech in the Pixel 4. Apple also still lacks Face ID on its MacBook line. Microsoft is ahead of the game with Windows Hello, which has offered facial login for years.

There are also a couple other small misses, too, due to the choice of processor. Because these are 8th-gen Intel processors, you don’t gain access to the new Wi-Fi 6 standard, which could be useful in the future.

You also don’t have an option for LTE. That feels like it could have been a shoe-in for increased connectivity and mobility. It would have been interesting to see Google hop onto the Qualcomm train with the new Snapdragon 8cx chips that come with LTE onboard by default.

You might think $649 (or $849 for the Core i5 model) is too much to pay for a Chromebook. You’re right in that you could get similar performance for less on other Chromebooks.

Still, you get what you pay for. The Pixelbook is more attractive and robust than the competition. It’s also at the top end of Chromebook performance. It’s proof that Chrome OS can work as a Windows or MacOS alternative when paired with the right hardware.

The Pixelbook Go’s closest competitor is the Acer Chromebook 13. The build quality there is nowhere near as good, but it does come with a higher resolution screen. The $700 base model comes with a similar dual-core processor but only 32GB of storage.

There are some impressive 15-inch Chromebooks out there, though they don’t have the same portability the Pixelbook Go has. The Lenovo Yoga Chromebook is a 15-incher, but has a great screen and impressive performance.

Otherwise, if you’re willing to switch to Windows, the Asus ZenBook 13 UX333 offers a similar price to the Core i5 Pixelbook Go, all while offering better performance, thinner bezels, and more varied port selection.

Want more options? Check out our favorite laptops of 2019.

Google has supported the original Pixelbook through continuous software updates, which has kept that laptop surprisingly agile. As long as it doesn’t get quickly canceled like the Pixel Slate, I expect a similarly long shelf life for the Pixelbook Go. It comes with with just a one-year warranty, but you can add Google’s Preferred Care for an extra $150.

Yes. This is the first Google laptop that’s made for the average person. It’s the best Chromebook you can buy.