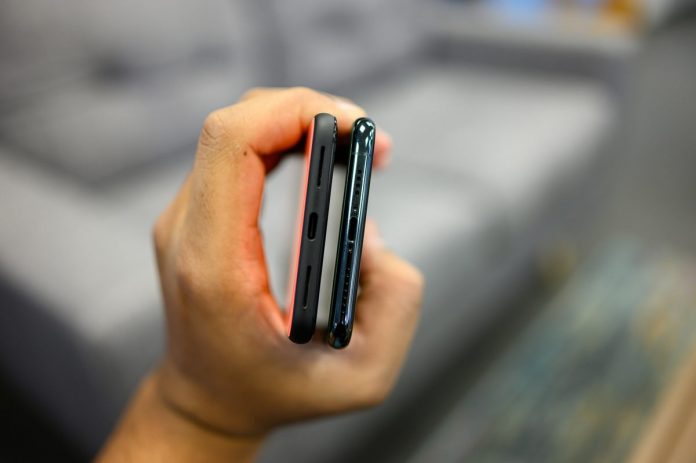 If you’re looking for Google’s vision of Android, then it’s the Pixel flagships you turn to and the new Google Pixel 4 XL is no exception. But there’s another excellent phone you might be considering, and that’s the iPhone 11 Pro Max from Apple.

Can Google’s new Pixel finally take a bite out of Apple? We put the two phones to the test to find out.

There’s no shortage of power in either of these phones, and the latest apps and games will run without complaint on either. Benchmarks prove the iPhone’s A13 Bionic processor is the more powerful compared to the Snapdragon 855 inside the Pixel 4 XL. You won’t necessarily see a difference in real-life use though. The Pixel has the edge in RAM, but since the two phones handle memory use differently, it’s hard to gauge the impact.

Apple has dramatically boosted battery life in the latest iPhones, with the iPhone 11 Pro Max being capable of a full day and more. Google boosted the size of the battery in the Pixel 4 XL, but not by enough. With medium to high use, the Pixel 4 XL just about gets through a workday, ending with 30% left in the tank at 5.30 p.m. If you’re headed out after work, it’s worth topping it up wirelessly during the day or with a portable battery pack.

Performance between the two phones is similar, with the iPhone having an edge in pure power, but the much-improved battery seals the deal for Apple’s big phone.

Google has gone right back to the drawing board with the Pixel 4’s design, slimming down the bezels, ditching the notch, and an extra lens to the rear camera. Amusingly, it’s not dissimilar to the iPhone 11 Pro Max’s design, with a square camera module on the back, and sleek glass bodies.

However, there are key differences. The iPhone’s camera module is strikingly obviously — perhaps too much so — while Google hides the Pixel 4 XL’s lenses with a black filter, making the design cleaner. The Pixel has larger bezels — especially at the top, where the radar-powered Motion Sense sensors sit. But the iPhone’s notch is still there, which may be a black mark for some.

There are fewer differences in durability though. Both are IP68-rated for water-resistance and are clad in glass, and would likely benefit from a protective case. The iPhone does have an edge, though as it uses a stainless steel frame, which should prove more durable over time over Google’s choice of aluminum.

It’s a tough category to call, especially because design is subjective, but we lean towards the iPhone’s slightly more durable frame.

The iPhone sports a larger 6.5-inch display here, but the Pixel is no slacker in terms of screen size, measuring in at 6.3-inches. They’re big and they’re also beautiful, thanks to the OLED technology used in both. You’ll get deep blacks and vibrant colors on either screen, with both being a treat to behold.

There’s a higher resolution on the Pixel 4 XL though, so it’ll be sharper to look at, but it’s the Pixel 4 XL’s 90Hz Smooth Display that really separates the two here. The higher refresh rate means the display feels more responsive and snappier, and it makes a bigger difference than you might think. That being said, the iPhone’s screen does get considerably brighter, making it easy to see the screen outdoors. The Pixel’s screen gets bright enough to be legible, but you might find yourself squinting at times.

By contrast, the Pixel 4 XL sports only two lenses, but they’re no less formidable. There’s the familiar 12-megapixel lens, now joined by a 16-megapixel telephoto lens. The Pixel has an 8-megapixel selfie lens around the front. All of Google’s image processing tech has improved, from Portrait mode and learning-based white balance to an impressive new Astrophotography mode, which uses Night Sight and long exposure times to take some stunning starry skies.

In our camera test, the iPhone and Pixel were often neck in neck compared to competitors, but ultimately the Pixel took the cake. That being said, choosing the best photograph is a subjective affair, but you can’t deny the iPhone is more versatile with its triple-camera setup. Also, the iPhone is leagues ahead of the Pixel 4 in terms of video recording quality — it can even hit 4k 60 frames-per-second, which can’t be done on the Pixel 4. Both of these are the best camera phones you can buy, but the iPhone nabs a slight win over the Pixel this year.

Usually, Apple would win the day with its snappy update speed — but that’s not the case with a Pixel. Both the iPhone 11 Pro Max and the Pixel 4 XL will get updates of their respective OS on day one of the rollout. It’s a draw.

The new Pixel range brings Google’s flagships up to the level of the iPhone 11 Pro Max by adding advanced facial recognition tech on the level of Apple’s Face ID. Though Motion Sense adds more than that — it can be used to skip Spotify tracks with a simple swiping motion above the phone, snooze alarms, or dismiss calls. While it’s still lacking support, it’s a useful new feature.

Apple simply doesn’t have anything on that level, and while it’s added some new features over the years, there’s nothing quite as ground-breaking — yet. Apple’s new U1 chip has the potential to add similar features, even though it’s primarily linked to pointing your phone at another iPhone to AirDrop.

Apple has Siri and Google has Assistant, and the latter has the leg up in terms of accuracy and speed. For the moment, the Pixel takes this round.

As ever where these two brands are concerned, this is a very close battle. The Pixel 4 XL brings a lot of new features to the table, including an improved camera, the 90Hz Smooth Display, and the Motion Sense air gestures — but ultimately, the iPhone 11 Pro Max’s fantastic battery life tips it for us. It also has an equally strong camera suite, excellent performance, and slick software.

Your decision comes down to more than just specs comparisons, and if you’re a Pixel fan, you’ll naturally want to upgrade to the newest member of the roster. Equally, if you’re an iPhone fan, then the iPhone 11 Pro Max will suit you to a tee. But if you’re really stuck between the two and have no previous affiliations or strong feelings — and an extra $200 — go for the iPhone.

Facebook
Twitter
Pinterest
WhatsApp
Previous articleIt’s you versus the world in these great Battle Royale games for the PS4
Next articleRepublicans tried to bring phones into the SCIF room. Here’s why they can’t