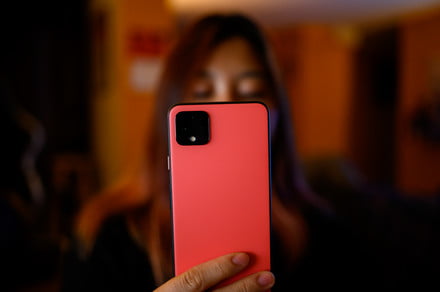 Google hid an Easter egg in the boxes of the Pixel 4 and Pixel 4 XL, viewable in augmented reality through the Google Lens camera feature.

Google is no stranger to Easter eggs, with its search engine doing various things when entering queries such as “do a barrel roll,” “Atari breakout,” “Thanos,” and many others.

The Pixel 4 box Easter egg, however, serves a specific purpose.

To view the Easter egg, look at the back of the box of Google’s latest smartphone, which will feature the device surrounded by various objects. Point the Pixel 4 camera at the image with Google Lens activated to start the augmented reality show.

As shown by the video taken by 9to5Google, the Easter egg starts with colorful shapes and a “Welcome to #teampixel” message, followed by animations that differ slightly between the Just Black, Clearly White, and Oh So Orange color options for the Pixel 4. Pictures taken by the device’s camera then start scrolling through, behind an invitation to join the @googlepixel community on Instagram. Tapping anywhere on the screen brings up a Google Lens card that will launch said account.

While all of that is happening, the physical environment surrounding the Pixel 4 box remains on the smartphone’s screen. This makes the Easter egg a great demonstration of the capabilities of Google Lens and augmented reality, in addition to promoting the smartphone’s social media profile.

The Pixel 4 and Pixel 4 XL received mixed reviews from Digital Trends. Both smartphones feature excellent cameras, great performance, and smart software. However, their ratings were dragged down by mediocre battery life, which has been an issue with Google’s Pixel smartphones since they first launched in 2016.

Comparing the two versions, the Pixel 4 and Pixel 4 XL are basically the same smartphone, but in two different sizes and slightly different price tags. The two devices feature the same processor,  software, and special features, but the Pixel 4 XL edges out its smaller counterpart due to the extra screen space and bigger battery capacity. The Pixel 4 will still prove to be a very capable smartphone though, for people who prefer smaller phones or those who do not want to pay an extra $100.

Facebook
Twitter
Pinterest
WhatsApp
Previous articleWill drive for Froot Loops. Rats cruise around in tiny cars in name of science
Next articleWhy the Surface Neo could work, but a dual-screen MacBook would be horrible