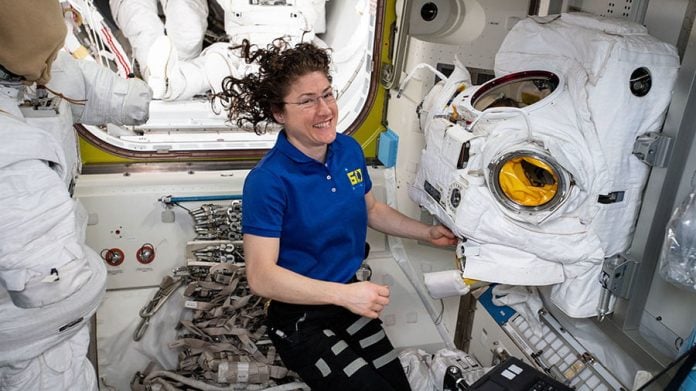 Expedition 60 Flight Engineer Christina Koch of NASA works on a U.S. spacesuit in the Quest airlock where U.S. spacewalks are staged aboard the International Space Station. NASA

Two astronauts aboard the International Space Station (ISS), Christina Koch and Jessica Meir, are set to perform the first all-female spacewalk in history later this month. Their work will be part of a slew of upcoming spacewalks in an ongoing project to upgrade the batteries on the space station.

When asked about whether it was important for her work to be recognized because of her gender, Koch gave a thoughtful response. “I think it’s important because of the historical nature of what we’re doing,” she said in a video posted to Twitter. “There are a lot of people who derive motivation from inspiring stories from people that look like them, and I think it’s an important aspect of the story to tell.”

It’s been a long road to get to the point where women are fully recognized for their scientific and engineering abilities. “In the past, women haven’t always been at the table,” Koch said. “It’s wonderful to be contributing to the human space flight program at a time when all contributions are being accepted, when everyone has a role. And that can lead to an increased chance of success.”

“What we’re doing now shows all of the work that went in in decades prior; all of the women that worked to get us where we are today,” Meir agreed, referring to female space pioneers such as Sally Ride, Evelyn Boyd Granville, and Jackie Cochran.

NASA had planned to execute the first all-female spacewalk earlier this year, sending astronauts Anne McClain and Christina Koch to install new batteries for the ISS. But that plan had to be scrapped when there weren’t enough correctly-sized spacesuits available in time for the walk date.

The space agency is preparing ahead to avoid any more sizing snafus this time around. The spacesuits come in three sizes for the main body: Medium, large, and extra-large, and although astronauts are extensively fitted for their suit size on the ground, when they get into space their sizing can change. The parts are interchangeable, but to swap a spacesuit body section for one of a different size requires up to 12 hours of adjustments to be made.

As all of the astronauts scheduled to perform upcoming spacewalks, both men and women, prefer to wear a size medium. That makes the logistics somewhat simpler, so two medium-sized suits have been readied for whoever needs them.

The spacewalk schedule is as follows:

Facebook
Twitter
Pinterest
WhatsApp
Previous articleHear the sounds of Mars with these incredible audio samples from InSight
Next articleCan the InSight lander free its stuck drill and continue exploring Mars?