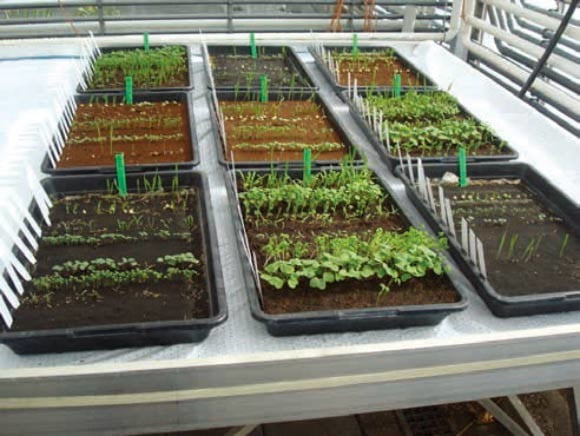 In a move that takes us one step closer to creating a colony on another planet, scientists have demonstrated that it is possible to grow edible food crops in soil like that found on Mars and the moon.

“A (permanent) human settlement on Mars or the Moon is becoming more realistic,” authors Dr. Wieger Wamelink and colleagues said in their paper. “Several countries and private companies are preparing for this journey. One of the major issues will be ensuring food availability and safety. Food can and will be brought along, but for a permanent stay, production of crops on Mars or the Moon to supplement or even supply the total food demand could be a necessity.”

To meet this need for food grown off-planet, the authors looked at whether crops could be grown in soils similar to the regolith found on the moon or on Mars. Real samples of moon regolith are very rare, as you can imagine, and there are no samples of Martian regolith on Earth. So for the experiments, the scientists used two simulated soils created by NASA which have similar properties to the Mars and moon regoliths. They then compared various crops to see how well they grew in the simulated regolith compared to normal soil.

To see which foods grew best, the experiment tried a number of crop varieties with edible parts: Garden cress, rocket, tomato, radish, rye, quinoa, spinach, chives, peas, and leek. In addition to health benefits of these crops, the authors also considered what foods would be flavorful and enjoyable for astronauts to eat. “Leek, radish, rocket, and chives were also selected because of their spicy taste,” the authors explained in the paper. “Astronauts on the ISS often complain about the taste of their food and spicy crops may therefore be a welcome addition to their diet.”

With the exception of spinach, which didn’t grow well, all nine other plants were able to grow even in the nutrient-poor regolith. The researchers were also able to harvest seeds from radishes, cress, and rye, which is important as germination is key to long-term crop cultivation. This means it is potentially possible to grow edible crops away from Earth, which brings us closer to being able to build a sustainable off-world base.

“We were thrilled when we saw the first tomatoes ever grown on the Mars soil simulant turning red,” Dr. Wamelink said in a statement. “This means that the next step towards a sustainable closed agricultural ecosystem had been taken.”

The findings are published in the journal Open Agriculture.