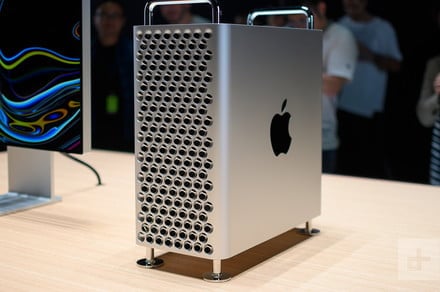 Apple’s upcoming Mac Pro has just received final approval from the FCC. That may signify that its launch is imminent; Apple’s website still says it’s coming “this Fall,” but FCC approval is considered one of the final hurdles to clear before a product is released into the wild.

In June 2019 Apple unveiled its totally redesigned Mac Pro. Far from the “trash can” design of 2013, the 2019 Mac Pro returns to the familiar tower PC look and feel. It features a stainless steel “Space Frame,” an exterior that can be completely removed, and a highly perforated front section designed to aid thermal regulation (and that has drawn unfortunate comparisons to a cheese grater).

As well, the new Mac Pro is highly modular, with a boatload of expansion slots and Apple’s own “MPX Modules” that allow you to swap out the graphics card (or cards) to meet your needs. That’s a far cry from 2013’s Mac Pro, whose compact, cylindrical design was the very antithesis of modularity.

That the FCC approval comes at this time is not surprising — a notable leak just days ago suggested the launch could be imminent. That leak concerned Apple’s Configuration Utility, designed to help certified technicians repair Apple devices. According to the leak, Apple updated its utility to include instructions on how to put the new Mac Pro into DFU mode for diagnostics and repair, suggesting the Mac Pro was almost ready for release.

As well as that, Apple has just launched the brand-new AirPods Pro, an upgrade on Apple’s popular wireless earphones. These come with active noise cancellation, interchangeable tips, vents to help reduce pressure, plus a new, smaller design.

Apple often releases new products in clusters, such as when it updated the regular AirPods, the iMac, the iPad Air, and the iPad mini all within a few days of each other in March 2019. Given that the AirPods Pro has just seen the light of day, it could be that Apple has other products — like the Mac Pro and its Pro Display XDR monitor — up its sleeve for an impending launch as well.

Keep your eyes peeled, then. As always, we’ll bring you all the latest Mac Pro news as soon as it drops.