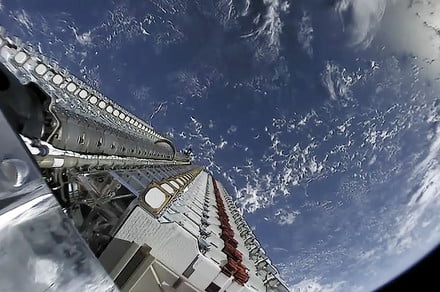 Elon Musk has just sent the first tweet via SpaceX’s internet satellites, a feat that goes some way to showing that Starlink isn’t just pie in the sky.

Starlink is an ambitious multi-billion-dollar project with the goal to beam cheap broadband to communities around the world where internet connectivity is currently unreliable, too pricey, or non-existent.

SpaceX sent the first 60 of what could turn out to be tens of thousands of small satellites into low-Earth orbit in May 2019. On Tuesday, ahead of a full-fledged test phase, SpaceX CEO Elon Musk tried out the system for the first time, posting a short message on Twitter that read: “Sending this tweet through space via Starlink satellite.”

When he saw that the message had landed on the feeds of his 28 million Twitter followers, he quickly fired off another one to express his glee, saying: “Whoa, it worked!!”

SpaceX president Gwynne Shotwell told SpaceNews this week that the plan is to start testing the system on a grand scale in mid-2020 with internet services initially offered to folks in the U.S. and Canada.

Shotwell said that to achieve this, SpaceX will need to launch at least six more batches of Starlink satellites, with each batch containing 60 satellites, and also complete work on the system’s user terminals. For global coverage, which SpaceX would like to see up and running within 10 years, 24 launches would be required.

Commenting on last week’s news that SpaceX was eyeing the launch of as many as 42,000 Starlink satellites in the coming years, Shotwell said that while far fewer satellites are required to achieve global coverage, having more of them in orbit would allow the company to offer a wider range of services according to customer requirements or desires.

Pricing hasn’t been decided yet, but Shotwell noted that many Americans currently pay around $80 per month for a “crappy service,” suggesting that it could charge U.S.-based customers the same, or less, for a better service.

Shotwell also revealed that Starlink is undergoing testing with the U.S. Air Force Research Laboratory as part of a $28 million “Global Lightning” program that could see the military also make use of the broadband service.

The Starlink internet business takes SpaceX into new territory, which is why it’s been on a hiring spree for the last 12 months or so. But it’s not alone in its ambitions to beam down internet from space. The sector is becoming increasingly competitive, with companies such as Amazon and Facebook also working on similar projects.