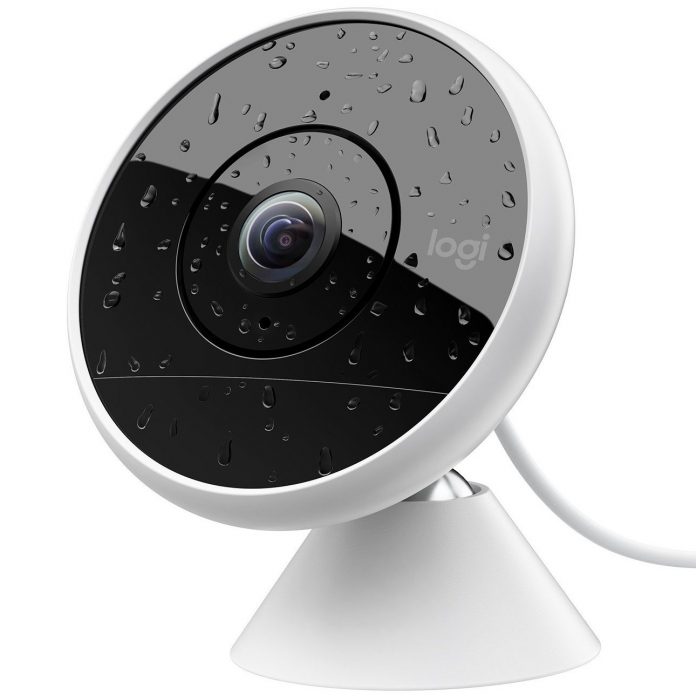 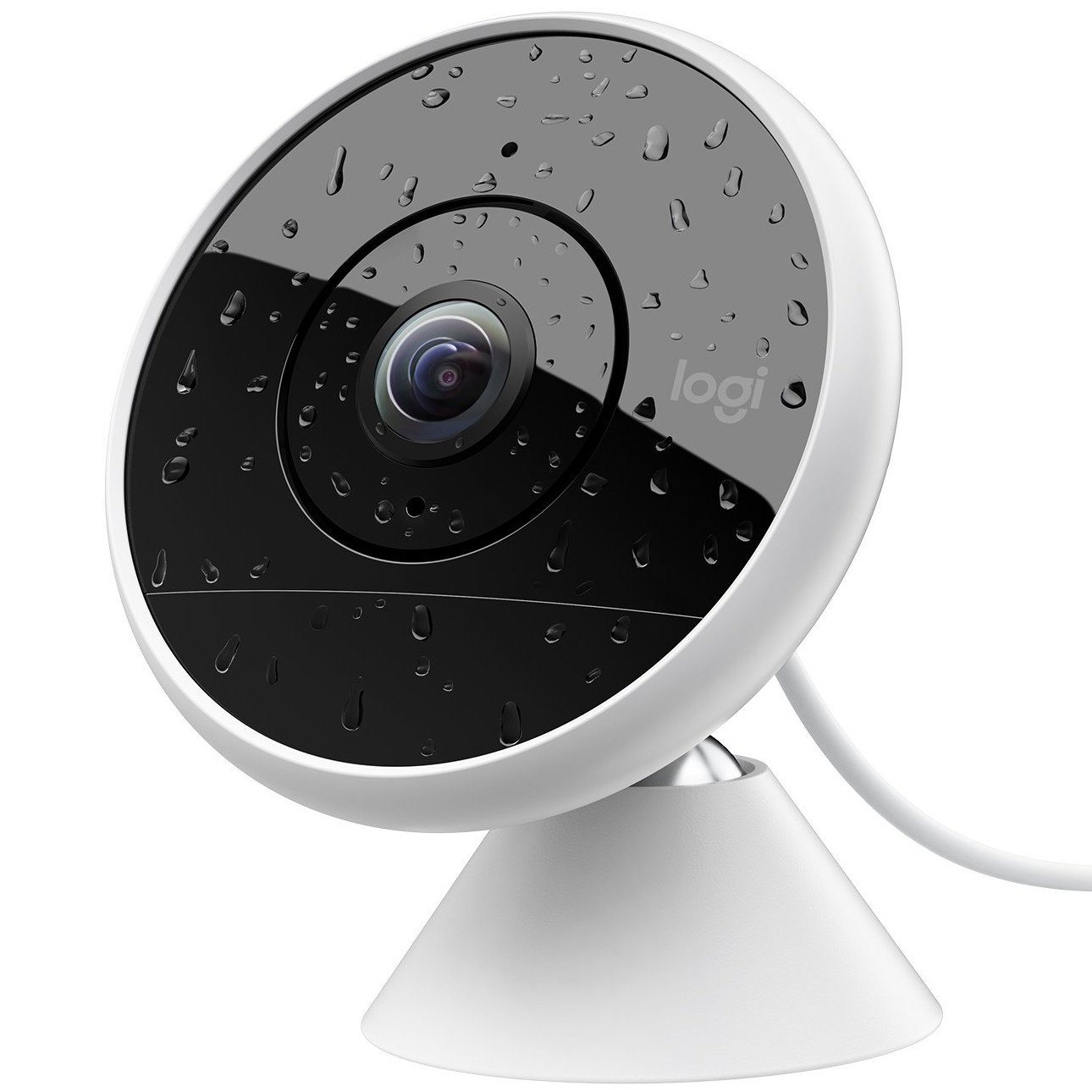 Not only does it look cool, Logitech’s Circle 2 remains one of the best home security cameras on the market. It’s one of the only cameras that’s compatible with Apple’s Homekit and also works with Google Home and Amazon Alexa. Our main gripe is the subscription model, which leans towards the expensive side. 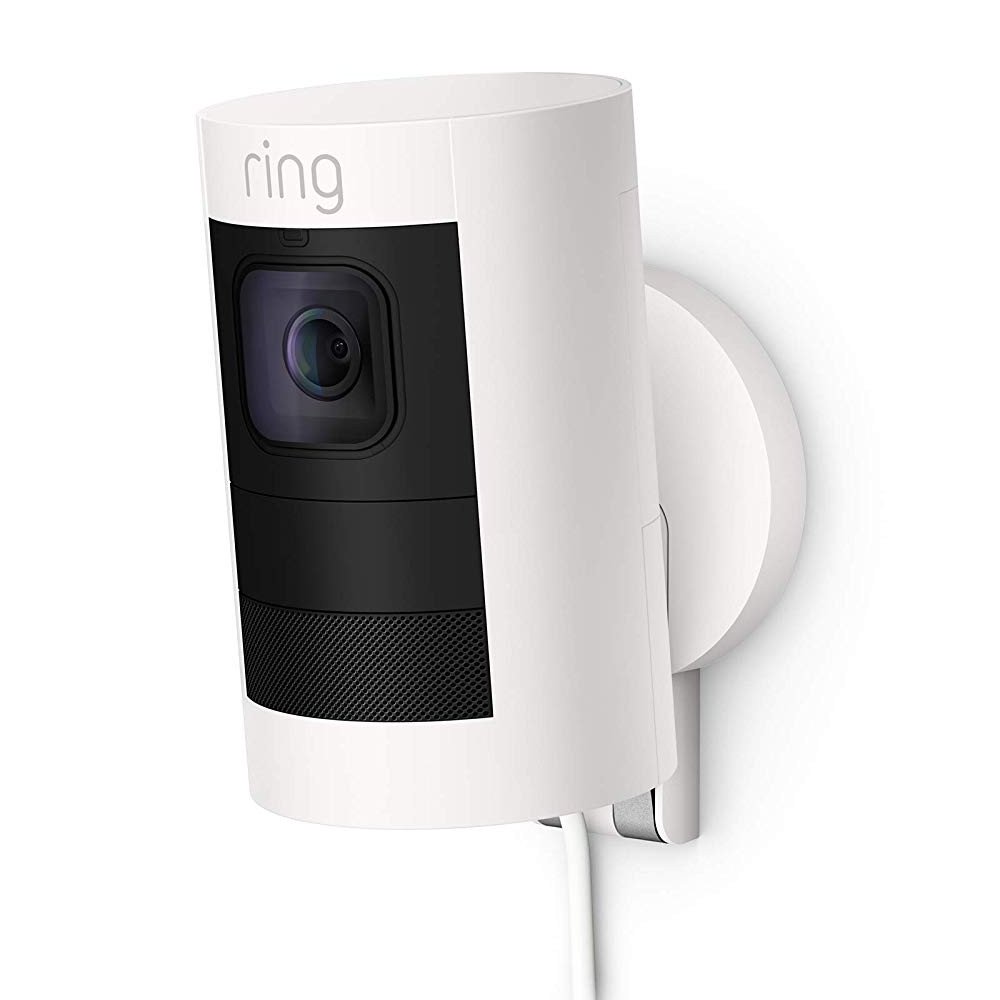 Aside from its configurable siren and lower subscription fees, Ring’s Stick Up Plug-In is outshone in almost every respect by the Circle 2. If you already have a Ring doorbell or security system — or you know that people in your neighborhood have them — it’s a good buy. Otherwise, Logitech’s camera is the superior option.

Home security is a serious matter, and when it comes to protecting what’s yours you can’t be too careful. Fortunately, thanks to the recent surge in smart home products, there are now a ton of configurable, internet-connected home security devices on the market. Unfortunately, the sheer volume of choices makes picking one sort of a herculean task.

A home security camera is a great place to start, and the Logitech Circle 2 is a great choice in that regard. Already well-known for its high-quality webcams, Logitech’s second foray into home security is an incredibly solid one. We’ll go over a few key differences between the Circle 2 and one of its major competitors, the Ring Stick Up Cam Plug-In.

Note that the Ring Stick Up Cam Plug-In has been refreshed with a significantly lower price. We’re reviewing the older model in this piece, but we’ve linked you to the new store listing. 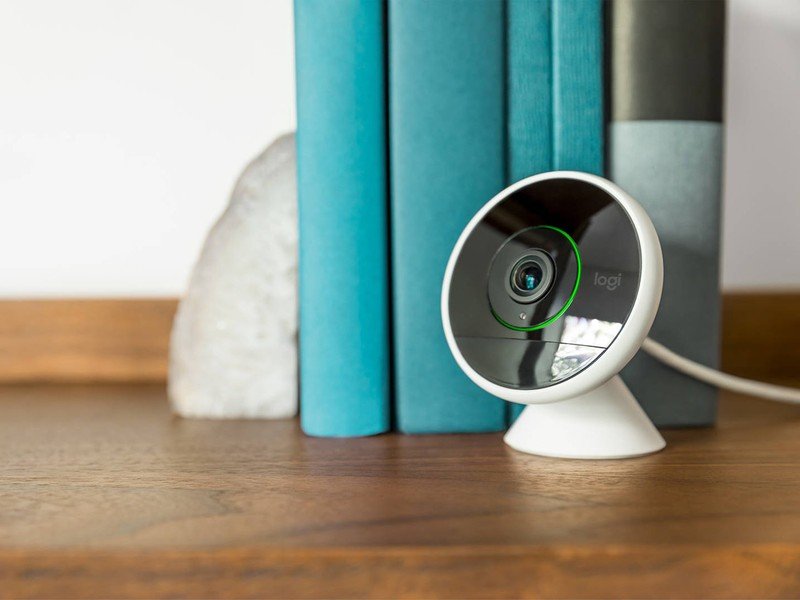 The Logitech Circle 2 and Ring Stick Up Cam Plug-In share a lot of features in common. Both offer 1080p HD recording, motion detection, and two-way audio. The two cameras are also both equipped with night vision, allowing your camera to record in the dark, but neither is particularly good at that last part. The image comes out a bit blurry with the Circle 2, and somewhat grainy with the Ring Stick Up Cam.

Still, the Circle 2 is the clear winner here. Though its daytime video quality isn’t phenomenal, it’s still very good — better, at any rate, than the Ring Stick Up Cam’s, with sharper details and better motion capture. It also has a much better field of view, with a 180-degree wide-angle lens versus the Stick Up Cam’s 150 degrees.

Unless you’ve got other products from Ring, the Logitech Circle 2 is hands-down the best choice.

Two-way audio is also clearer and more consistent with the Circle 2.

Where the Logitech Circle 2 really outshines the Ring Stick Up Cam Plug-In, however, is in its motion detection features. Both cameras allow you to set custom motion zones, which are areas of the camera’s field of view that it specifically looks at when monitoring for movement. With the Ring Stick Up Cam, you can create up to three zones for free; the Circle 2 allows you to create up to five with a subscription.

The Circle 2 also allows you to set up geofencing, so the camera automatically activates motion detection and records when you aren’t present. It’s also capable of differentiating between people and pets. Perfect if you’ve got any curious cats or energetic dogs.

The Ring Stick Up Cam Plug-In does have an advantage here over the Circle 2. Through the companion app, there’s a siren that can be remotely activated via the Ring app. It’s a little extra touch to scare off invaders, though it’s not especially loud.

As with most homes security cameras, both the Logitech Circle 2 and Ring Stick Up Cam Plug-In require a subscription fee to access anything beyond their most basic features. This is one area where the Ring Stick Up has at least a slight edge over its counterpart.

The Circle 2’s subscription plans (shown below) are based on the number of cameras you own. If you have more than one, you’ll need to purchase a Home plan, which provides coverage for up to five cameras. If you want to have more than five cameras, that means multiple plans.

Consequently, Ring’s plans allow you to add as many cameras as you want if you shell out for the Plus subscription. 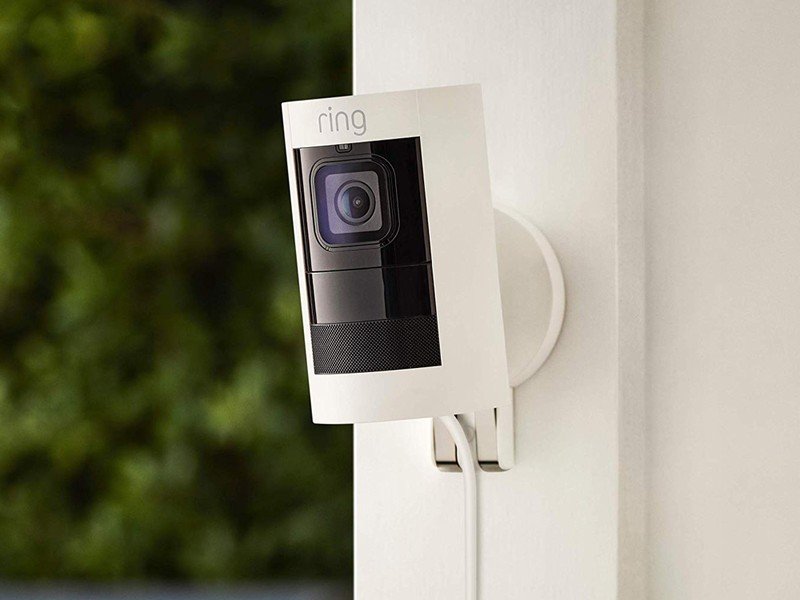 If you’re looking to control your security camera with Google Home, your only option between the two is the Circle 2, which also suports Apple HomeKit. Though Ring’s camera integrates pretty seamlessly with Amazon Alexa, that’s the only major voice control system it does work with. That’s possibly the biggest black mark against the Ring Stick Up Cam Plug-In.

The big draw of Ring in terms of home security is that it integrates with the company’s other products, including its smart lighting, video doorbells, and alarm system. There’s also the Neighbors app, which hooks you up to other Ring systems in your neighborhood. You can share safety alerts with other users, report crimes to the authorities, and check in on current events in your community.

It’s a cool feature, so if you aren’t set on using Google Home or Apple HomeKit, it actually makes the Stick Up Cam Plug-In a compelling choice. In terms of smart home integration overall, however, the Logitech Circle 2 is your best bet.

This might just be our personal opinion, but Logitech’s Circle 2 is hands-down the most attractive of the two cameras. It’s got a cool, understated sleek design that allows it to look right at home just about everywhere, and that’s precisely where you can put it. Logitech offers multiple mounting options for its camera, with several peripherals including a plug mount and a window mount (not included out-of-the-box).

Granted, Ring’s Stick Up Plug-In doesn’t look bad. Its rectangular design just doesn’t quite pop in the same way as the Circle 2. What it does offer is a slightly better out-of-the-box mount, which allows it to easily be setup in pretty much whatever way you choose. Again, that’s easily remedied by purchasing one of the Circle 2’s optional attachments.

Unless you’ve got other products from Ring or you live in a Ring Neighborhood, the Logitech Circle 2 is hands-down the best choice. It looks better, performs better, and it’s compatible with more voice-controlled assistants. While the Circle 2’s subscription fees (and price) ultimately come out to considerably higher than those of the Stick Up Cam Plug-In, it offers a whole lot more functionality as a result.

Just be careful if you’re planning to buy more than one. The monthly subscription fee for the Circle 2 is based on the number of cameras you own. That means the costs can add up fast, especially if you spring for a premium plan. 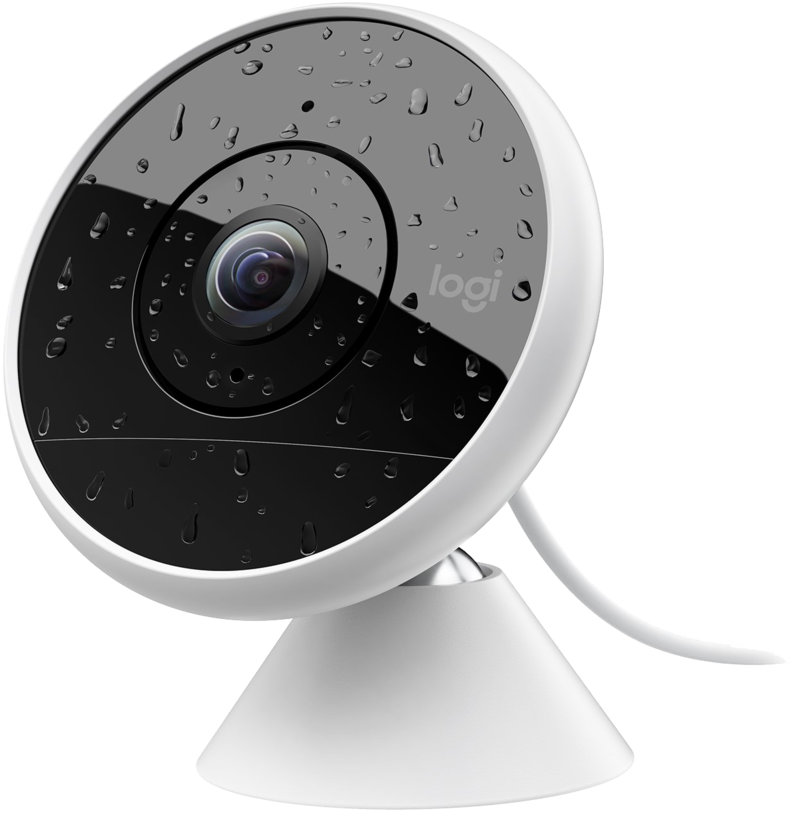 It looks cool, it works well, it’s easy to use, and it’s widely-compatible with the major smart home assistants. That’s more than enough to make the relatively high price tag palatable. .

Not bad but not great 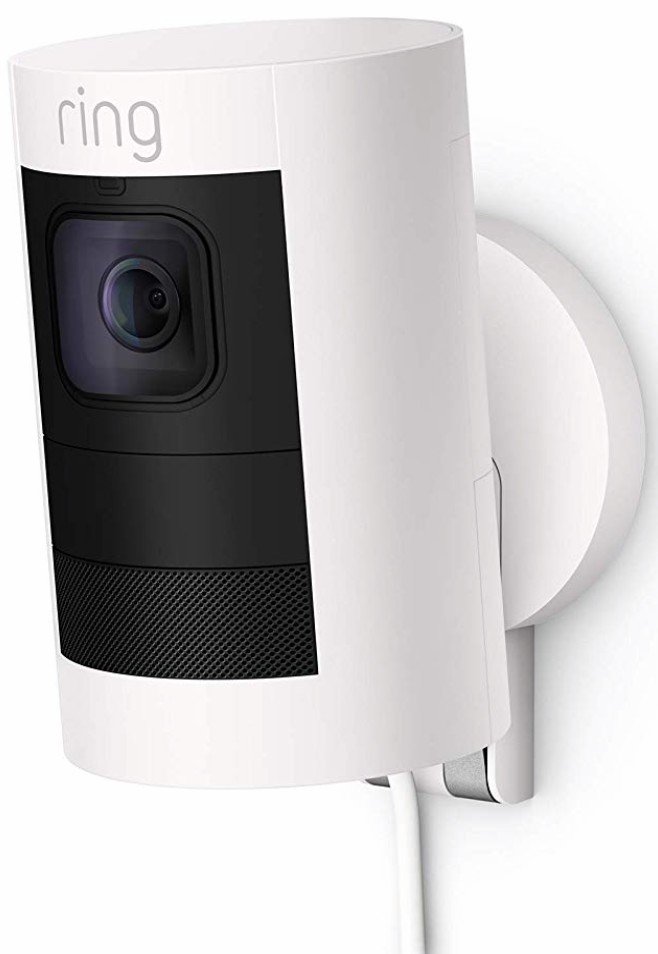 The Ring Stick Up Cam Plug-In is a solid product, perfect if you already own a Ring family of products. It’s also cheaper than the Circle 2. Just remember that you get what you pay for. 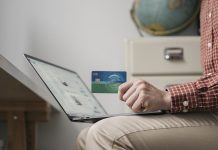 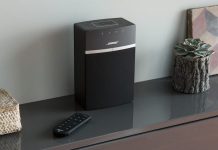