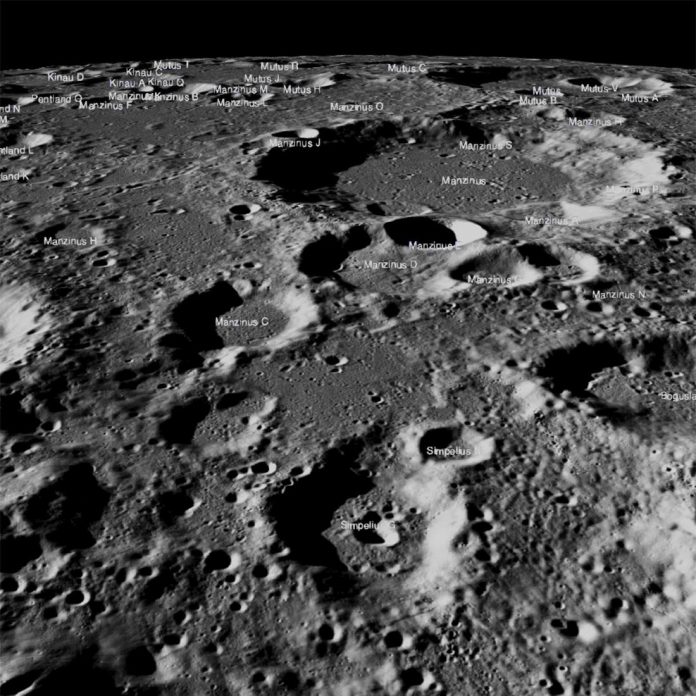 The Chandrayaan-2 lander, Vikram, attempted a landing September 7th (Friday the 6th in the United States), on a small patch of lunar highland smooth plains between Simpelius N and Manzinus C craters. Unfortunately the landing was not successful and location of the spacecraft has not been announced. The scene above was captured from an LROC Quickmap fly-around of the site, image width is about 150 kilometers across the center NASA/GSFC/Arizona State University

There’s one new piece in the puzzle of the sad end to India’s Chandrayaan-2 moon lander. Last month, the Indian Space Research Organization (ISRO) attempted to land the Vikram lander on the moon but lost communication with it during the final descent. It is believed that during this time the lander flipped upside down and crashed into the lunar surface. Although the ISRO was able to locate the lander on the moon, they were not able to reestablish communications with it before its power ran out.

Now, NASA’s orbiting lunar spacecraft, the Lunar Reconnaissance Orbiter (LRO) has snapped a picture of the area where the crash is believed to have occurred. The LRO is able to take high-resolution images of the surface of the moon from orbit, and has previously spotted the crash site of the Israeli lander Beresheet and seen China’s Chang-e 4 lander exploring the far side of the moon.

However, it’s extremely difficult to spot the Vikram crash site from the LRO image because the lander was so small. There are also many shadows in the image, which could obscure the lander’s remains. The projected landing site was between two of the craters seen above, Simpelius N and Manzinus C, which are located near to the south pole of the moon. The IRSO hasn’t shared the location of the crashed lander, but NASA believes it must be somewhere in this image.

If you fancy searching for the lander yourself you can go to the LROC website, where there is an interactive map of the moon centered on the co-ordinates at which Vikram was supposed to land. You may also want to check out the LROC’s map of the entire lunar surface, focused on the co-ordinates of the landing site: 70.8°S latitude by 23.5°E longitude.