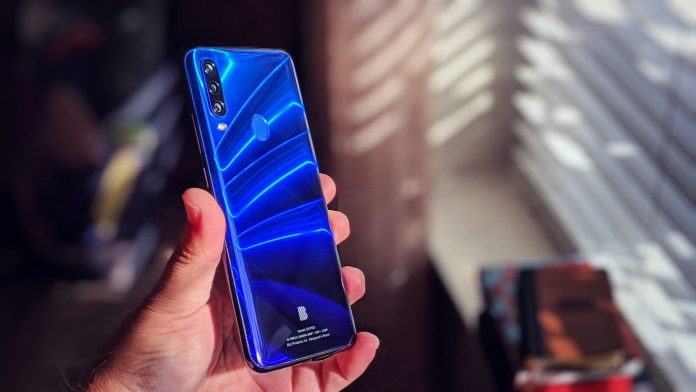 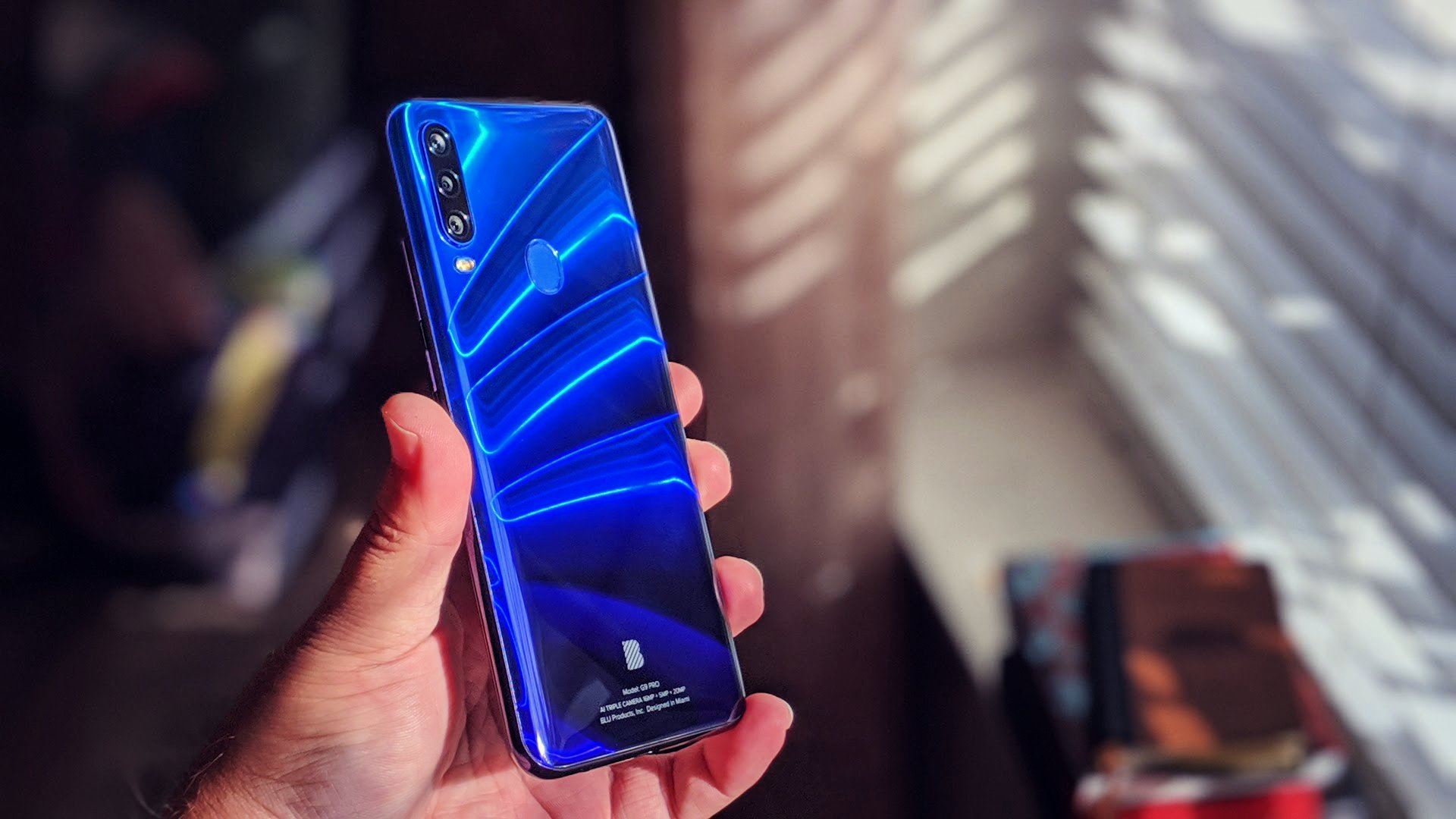 When it comes to mid-range phones, there’s no shortage of selection. Nearly every handset maker has something to offer which falls in the price range of about $250-$400, even the likes of Samsung. Unlocked phones are no exception to this, either.

Blu is a phone manufacturer who tends to play largely in this sandbox. Its recent G9 Pro is exactly that sort of device — a middle of the road experience with a budget-friendly price tag.

Our team has had a Blu G9 Pro on hand for a few weeks now and are ready to put our thoughts into a formal review.

The Blu G9 Pro ticks nearly all of the major boxes for a quality smartphone experience in 2019. Not all of them, of course, but enough to satisfy the masses. 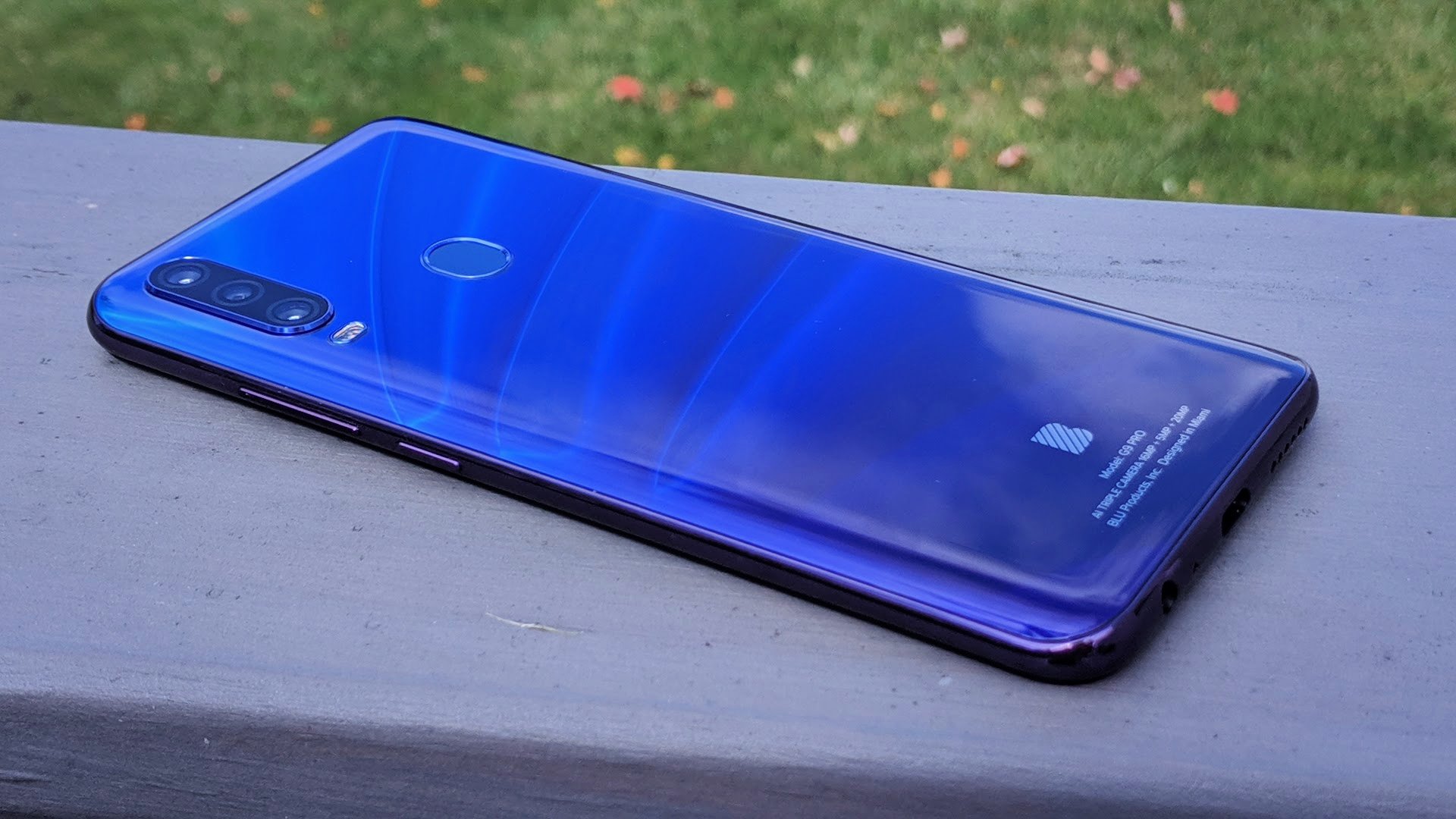 Powered by Android 9 Pie, the G9 Pro features a generous 6.3-inch display with a minimal water drop cutout notch. The rear houses a triple camera setup, led by a 16-megapixel Sony sensor, a 5-megapixel depth camera, and a 20-megapixel shooter for night shots.

The phone has a thin, curvy profile that fits nicely in hand. There’s nothing overly special about the design, but we do appreciate that Blu didn’t cut corners. Or, is it that we do like the way it cuts corners?

The G9 Pro has a deep purple and blue color that fits right in with other “premium” looking phones of the day. There’s an interesting gradient effect that breaks across the back which really catches light nicely.

As for buttons and the visible hardware, it’s par for the course. The volume and power are located to the right edge of the screen with the microSD/SIM card slot on the opposite side. 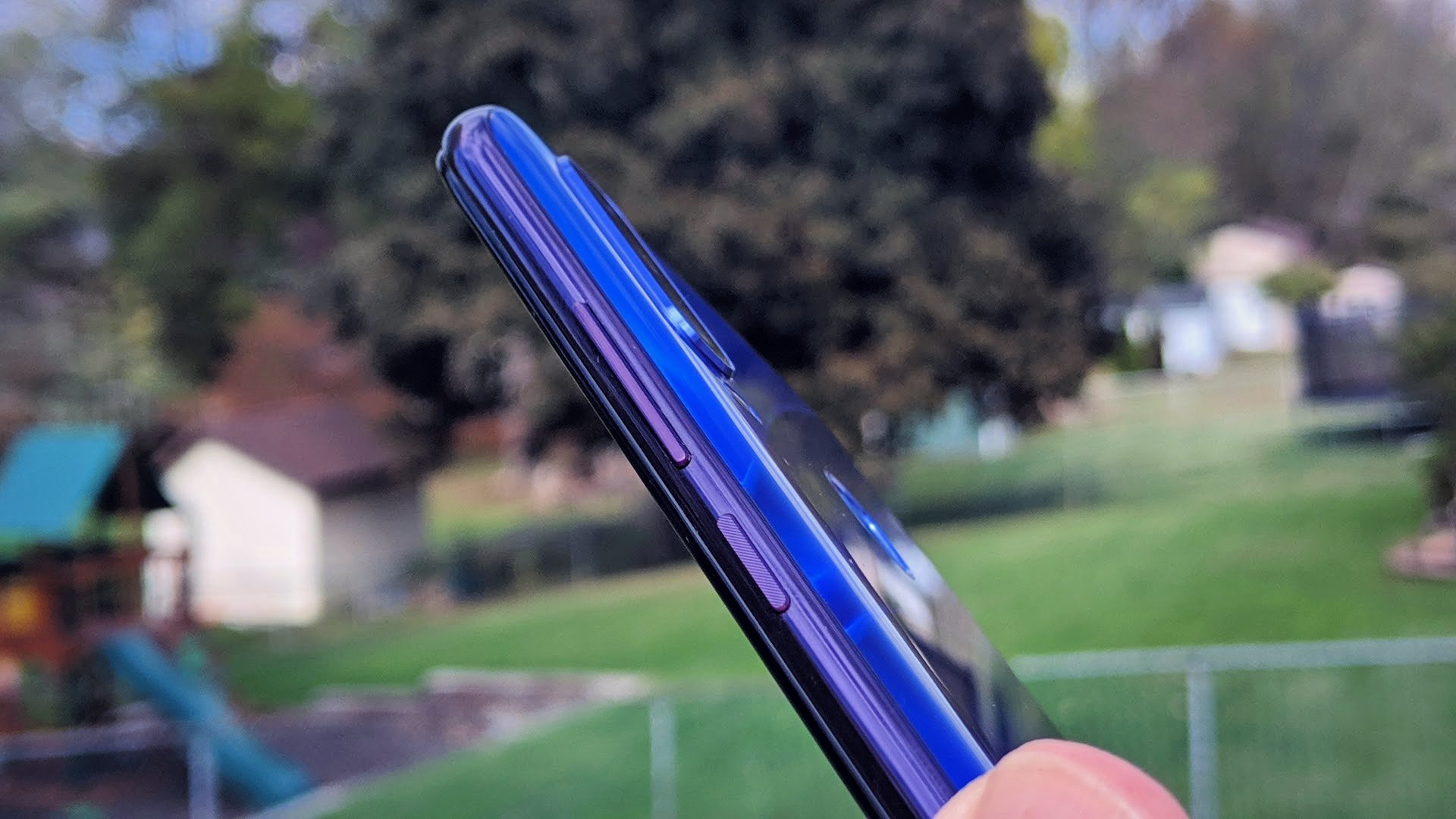 The bottom edge houses the 3.5mm headphone jack, speaker, and USB Type-C charging port. An ultra-thin speaker grille is placed just above the camera and display.

The three cameras are set to the top left of the back of the phone with a fingerprint scanner nestled about 3/4 of the way up the center.

Blu sells its phones as unlocked devices which means they are compatible with GSM carriers like AT&T and T-Mobile. Additionally, they’re compatible with the likes of Cricket, Metro, and the other players which use the respective networks. Of course, the phone will also work outside of the US with a whole host of carriers.

From time to time Blu will build its phones with support for Verizon or Sprint. While it does technically leave the door open for Verizon compatibility, it is not touted by the phone maker or the carrier. Additionally, and notably, the G9 Pro does not have support for LTE bands 14/29/30/66/71. Without them users won’t get the full coverage, data speeds, or quality they might expect from their GSM carrier. With that said, the 2/4/5/12 bands should be sufficient for many AT&T and T-Mobile subscribers.

As is the case with pretty much anything that comes out of the Blu camp, the G9 Pro is a nearly stock Android experience. There’s no special “skin” or custom UI but there are a few apps that get installed at the factory.

We’ve seen a number of instances lately where Blu phones start out void of extra apps or games upon first booting up. But, once you connect to a Wi-Fi network or cell tower, it goes ahead and loads a few others. Such is the case with the G9 Pro as our review unit installed a number of titles. 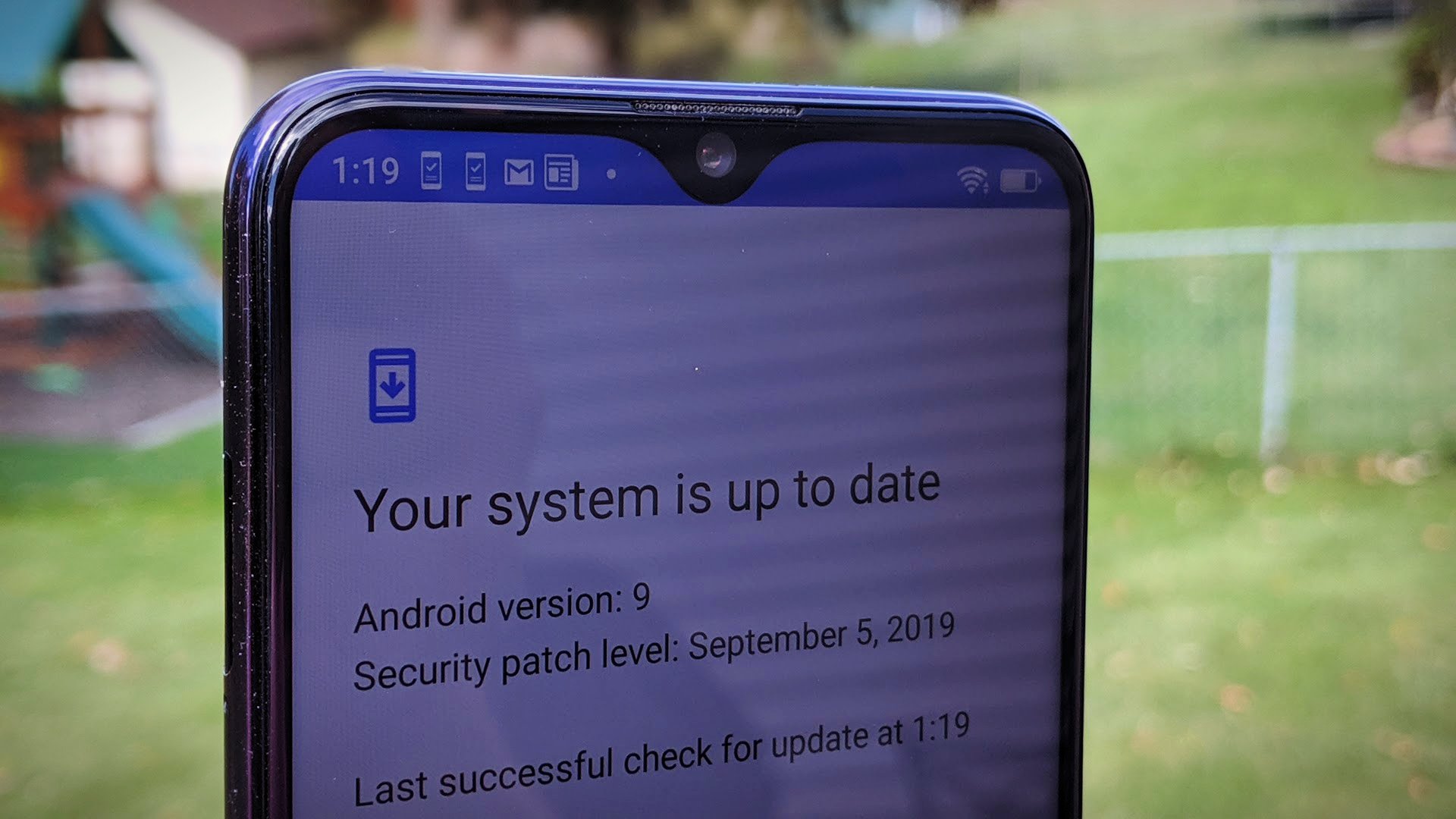 Included with the phone are Coin Master, Pandora, Solitaire, Games Hub, News, Yahoo Mail, and VivaLive TV. All can be uninstalled or disabled, but might be worth a look for new smartphone users. In terms of space, the review unit had more than 88% of the 128GB free, even with those apps installed.

The G9 Pro has Android 9 Pie installed with the most recent security patch being September 5, 2019. This arrived in mid-October and seemed to jump directly from July’s We’re hoping to see something here every other month or so.

Largely an untouched Android UI, there’s a nice mix of color in the settings menus and grouping is relatively the same as what you get from Google. There are a handful of additional options available, though, which give the user an extra bit of customization.

Navigation and gestures, for instance, is a good place to start so you can be sure the phone feels like it’s doing the right thing and that buttons are in a reasonable order.

Counting cameras doesn’t really matter in 2019. Whether there’s one or four lenses means very little to most people. The AI stuff, depth sensors, night modes, time of flight, and other tech is great, to be sure, but it’s not what the masses care about just yet. Largely, we care about the end result. And that end result is often simply shared on social media. Ask yourself to name the last time you snapped a photo and printed it out.

We’re getting more demanding, though. Shooting at night, taking portraits, and closeups are coming along and people are slowly conditioning themselves to want more. To that end, the G9 Pro is all the camera that most people need. There is a 20-megapixel sensor here that’s used strictly for night mode. How does that fare in practice? At first, things look decent, but expand it to full screen and get closer and you’ll see that it’s definitely not perfect. It’s good enough, but not great. We actually liked the standard camera or the HDR one instead of the dedicated night mode. If we had issues with the camera experience, it’s largely around the app itself. Things weren’t intuitive or presented in a manner that makes sense the first few times. Getting to HDR, bokeh effects, or beauty mode is wonky. Moreover, there’s no auto-HDR and the Pro Mode didn’t let us control shutter speed. This would have been great for night shots that are taken with a steady hand. The 96-megapixel mode is pretty much a gimmick, to us. Not only does it take too much time to write the image and save it to your phone, but it takes up too much space. Try as we might, it was impossible for us to discern any extra detail in the photos.

We suggest spending some time with the app, familiarizing yourself before going out in the world and learning on the fly.

We’re collecting images captured on the G9 Pro in a Google Photos album and will update it over the coming days/weeks. These will be left unedited.

This is a solid mid-range phone on all accounts. We found it to work perfectly well for the general day-to-day stuff like social media, email, messaging, podcasts, and the like. Installing a game like Mario Kart Tour didn’t present any problems and we didn’t get the sense that we were on the verge of slowdown.

On the other hand, we did detect an occasional lag when hopping between apps. This was more noticeable when multiple apps and games were running in the back. Though, to be fair, we were looking for these sort of things.

Handing the phone off to less demanding users, and those who don’t have such a critical eye, the G9 Pro handled well. Touching quickly on a few other aspects, the fingerprint scanner works quickly to unlock the phone as does the face unlock. Neither were difficult to set up and both felt snappy enough.

The audio is loud and clear but we’d never really want to listen to music on the speaker. For games, YouTube,  and other videos have enough punch for those moments on the couch or waiting room.

Battery life, at 4,000mAh, is higher than we’d expect for the price and gets us well beyond a day’s worth of usage. Things charge up quickly over USB Type-C at 18W and the wireless charging is a welcome feature. Blu walks both sides of the line when it comes to the wireless standard and we’re glad to see it come down on this side.

We like the physical appearance of the phone quite a bit. It’s one of the more attractive designs to come from Blu with a comfortable feel. Its nicely rounded, sleek and very modern. The purple and blue is interesting and eye-catching stuff and we hate to hide it under a protective case.

We’re fortunate that price no longer dictates appearance or size. Gone are the days of spending $700 on phones just to get a large display. At 6.3-inches it’s generous enough to make games, video, and text just a bit more engaging. And, thanks to the aspect ratio and the minimal waterdrop cutout notch, it doesn’t make for a cumbersome in-hand experience. Now, to be clear, you may want to check with your carrier to ensure you’ve got coverage with the network bands in areas that matter. While the G9 Pro does have a respectable amount of support, it leaves a few newer bands off the table.

The camera experience could definitely be more cohesive but it’s not enough for us to complain all that loud. Most of the target user base is likely going to open up the app and take whatever automatic settings provide.

Blu has done an excellent job of mixing performance with aesthetics and seems to be getting better at phones. We like the slowed, more deliberate approach to its devices, especially if it keeps heading in this direction. We’ll take sub-$200 phones like this any day of the week.

As of the time we published this review, you can find the Blu G9 Pro for $200 at Amazon. It’s currently listed with a $50 discount, but we don’t know how long that will last.

YouTube is among the top video hosting service providing websites on the internet. Anyone can upload their videos on it and share...
Read more
Software

As part of your business operations, you likely have to share PDF files that contain important or confidential information and so would naturally want to prevent...
Read more
Software