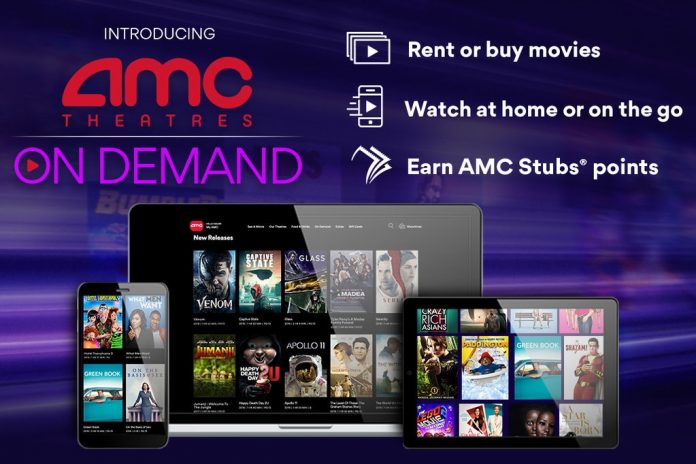 Called AMC Theaters on Demand, the online store launches today with around 2,000 films in its catalog, with new releases being added after their standard theatrical run.

Movie studios including Disney, Warner Bros., Universal Pictures, Sony Pictures, and Paramount have agreed deals with the theater chain to sell and rent movies both old and new over the video-on-demand service. Each film can be rented for between $3 and $5.99, and purchased for between $9.99 and $19.99.

The program resembles one that Cineplex in Canada has offered for some time, but AMC is the first major American chain to offer a similar service.

According to The New York Times, the new service aims to capitalize on AMC Stubs, the chain’s fast-growing customer loyalty program that launched last year and already covers more than 20 million households. Taking up the market left behind by the now-defunct MoviePass, AMC Stubs A-List members can see up to three movies a week for one monthly price.

AMC Stubs members bought about six million tickets to “The Lion King” over the summer. When “The Lion King” becomes available digitally on Tuesday, “those people will all get a personalized message from AMC saying that they can now enjoy it at home through AMC Theaters On Demand,” said Elizabeth Frank, AMC’s chief content officer.

AMC is said to have been working on the video-on-demand service for more than two years and was close to introducing AMC Theaters On Demand this summer, but delayed the launch while it fine-tuned the technology and online store design.

Facebook
Twitter
Pinterest
WhatsApp
Previous articleApple Pay Expands to Additional Banks in Germany, Austria, and the Netherlands
Next articleHow to install Kodi on a Raspberry Pi in 2019

Nearly a year ago, Google announced it was acquiring the popular fitness band maker Fitbit for $2.1 billion dollars. However, as per usual, big acquisitions such as this aren’t a simple transaction. They require the approval of government bodies and wading through a lot of red tape before being finalized.The EU has given Google a reason to be jolly for the holidays though by approving the acquisition of Fitbit, although it comes with some conditions.For starters, Google must agree to keep Fitbit user’s health data separate from its ad business. This was the number one concern of many Fitbit uses upon hearing the news of the Google buyout. Users in the EU will also have the option to prevent Google apps such as Assistant and Maps from viewing their data from Fitbit.Next, Google is required to maintain Fitbit’s previous web API that gives third-party software access to the data that is collected. For example, apps that allowed syncing of your Fitbit data such as calorie counting apps.Lastly, Google cannot give itself an unfair advantage by giving its products exclusive access to features or degrade the experience for third-party wearables. All improvements and changes must be made freely available as part of the Android Open Source Project giving access to its competitors.All of this sounds perfectly reasonable, and Google must abide by these restrictions for a term of 10 years, at which time the ad restrictions may be renewed if deemed necessary.The EU approval is an important hurdle for Google to clear, however, it is still waiting on approval from the U.S. government. Unfortunately for Google, the Justice Department and several states are currently suing the search giant over antitrust violations. It may be more difficult to get the rubber stamp on the Fitbit acquisition considering all of the heat Google has on it from regulators in America.
Read more

We’re only weeks away from Samsung’s upcoming jam-packed Unpacked event on January 14, 2021. At the event, we expect to see the launch of the Korean brand’s latest Galaxy S21 lineup of smartphones, along with the new Galaxy Buds Pro.As is tradition with these big launches, pretty much everything has leaked out ahead of time. We’ve already seen renders of the S21, official teaser videos, and even a hands-on video. Now, we’re getting a fresh set of renders that show off the S21 in four different colors.The renders come from us via notable leaker Ishan Agarwal’s Twitter account and reveal the S21 in Phantom Violet, Phantom Pink, Phantom Grey, and Phantom White. Is that enough Phantom for you? Perhaps we should throw in a Phantom of the Opera as well.Besides the colors, the renders don’t really show off anything we haven’t seen before. Samsung is going for another center hole-punch camera on the front, and making use of a unique metal frame around the camera housing on the back. What is sure to be the Galaxy S21’s defining design characteristic.Those aren’t the only renders to have leaked out though. Alongside the Galaxy S21 images, we also saw WinFuture publish press renders of the Samsung Galaxy S21 Ultra in Phantom Silver. The device really stands out with its massive camera bump which takes center stage, featuring five cameras in total. It’s speculated one of those cameras will feature a 108MP sensor.If photos don’t get you excited then maybe a hands-on review of the Galaxy S21 Plus will. Following up from his previous videos, YouTube user Random Stuff 2 has uploaded an unofficial review of the device weeks before the official announcement.In the video, he confirms the Galaxy S21 Plus comes with a Snapdragon 888, 8GB of RAM, a choice of 128GB or 256GB of storage, and runs Android 11 out of the box. On the camera side, we see that the S21 Plus will use a 64MP, 12MP, 12MP triple rear camera setup featuring 3X optical zoom.The video also gives us a look at some preliminary sample images with a comparison to the iPhone 12 Pro Max. Just remember the Galaxy S21 Plus isn’t running final software so the image quality may change.It seems just about everything has leaked out about Samsung’s latest flagship, but we’re still waiting on confirmation that the S Pen will make its way to the S21 Ultra. Earlier reports suggested Samsung would kill off the Note series of phones this year after adding support for the S Pen to the S-series. However, it looks like the death of the Note may be delayed for a later date.
Read more

OnePlus has been said to be working on a smartwatch as early as 2016, but now it seems like a soon-to-be-realized reality.On December 14, OnePlus CEO Pete Lau held a meeting over video call with various journalists discussing the future of OnePlus and some of the events in the past year or so of their history. He discussed Carl Pei’s departure from the company, the controversy over the Facebook partnership, how their TV is a step towards building an ecosystem of devices, and how the upcoming smartwatch ties into that ecosystem.Lau discussed how a smartwatch was scrapped in 2015 because the company wanted to stay focused on phones at the time, having just made the OnePlus 2 with its own issues and the production of the budget X phone.More things are coming to the OnePlus ecosystem. It’s just a matter of timepic.twitter.com/r6RIILU8AQ— OnePlus (@oneplus) October 14, 2020Now, though, OnePlus has been well-established in the smartphone market and they’re looking to build an ecosystem. According to Lau, they are working with Google to improve Wear OS and the interconnection between Wear OS, Android TV, and Android smartphones.In addition, Lau discussed the company’s goals to improve their phone cameras as well as a desire to stay out of the foldables market.
Read more