Home News 400 years after the Mayflower voyage, this A.I. ship will retrace its...
News

400 years after the Mayflower voyage, this A.I. ship will retrace its path 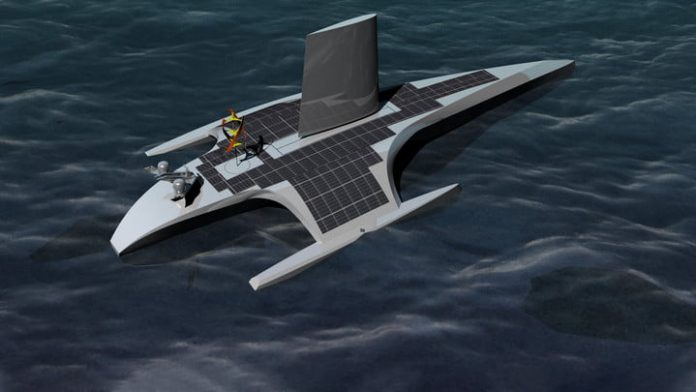 Stop us if you’ve heard this one before. Four-hundred years ago next fall, a ship called the Mayflower set sail from Plymouth, England, to the New World. It carried 102 passengers, made up of English Puritans, known today as the Pilgrims. Once they arrived at their destination, they established Plymouth Colony and signed the document that became a rudimentary first draft of modern democracy in America.

Now for the part that’s probably a bit less familiar. Next year, to mark the fourth centenary of the Mayflower voyage, another ship will follow in its wake, traveling from Plymouth in the United Kingdom across the Atlantic. But once it completes its 12-day journey to the U.S., there will not be any documents signed or colonies established — because there won’t be any crew on board.

Welcome to the exciting voyage of MAS, aka the Mayflower Autonomous Ship. Built by ProMare, a nonprofit marine research organization, and powered by IBM’s impressive Watson A.I. technology, MAS promises to be among the first unmanned and autonomous ships to ever cross the Atlantic. And it’ll do it next September, the same month that the original Mayflower made its perilous 60-day crossing.

“This project brings together all the technologies that are core to IBM’s business interests and values, from high performance computing, through artificial intelligence, to edge computing,” Andy Stanford-Clarke, IBM chief technology officer for the U.K. and Ireland, told Digital Trends. “IBM pioneered the computing systems used to help put man on the moon, so it seems apt for us to be on this mission to create a system capable of real-time self-navigation of the ocean.”

A Mayflower for the 21st century

“A couple of years ago, I was meeting with some folks from the city of Plymouth,” Brett Phaneuf, president of marine autonomy company Submergence Group and the originator of the project, told us. “They were talking about maybe building a replica of the original Mayflower. I said, ‘Why would we want to build something from the 17th century? What we should do is to make something a little bit more ambitious.’ That’s when they threw the gauntlet down and said, ‘Alright, smart guy, what’s that then?’”

At that point, Phaneuf suggested building a revolutionary autonomous ship that could retrace the path of its namesake, while using the latest artificial intelligence technology to steer itself. “This could draw on our history and legacy of exploration and new beginnings,” Phaneuf said. “You can use [it to] inspire and inform our vision for the next 400 years. [I wanted to] build a ship that speaks to the future, informed by the past.’”

The Mayflower Autonomous Ship uses similar technology to the tech that powers today’s self-driving cars. That includes both lidar and radar, as well as automated identification systems trained to spot hazards such as buoys, debris, and other ships. Combining this data with maritime maps and weather information, MAS will plot an optimal path across the ocean.

In the event it determines something that needs to be avoided, its IBM-powered Operational Decision Manager software allows it to change course — or even draw power from a backup generator to speed away from the hazard.

A ship with no crew

As exciting as the tech that powers the MAS is, however, its appearance is its most attention-grabbing feature. It boasts a triple-hulled “trimaran” design that makes it look like an enormous sai (the fork-like weapon Raphael uses in Teenage Mutant Ninja Turtles) and is designed for cutting through the waves.

Phaneuf said this futuristic design came about organically when the designers set out to create a ship that needed a crew of zero onboard humans. In his own words, MAS is a “study in reduction,” with no need for any of the trappings that are usually there to house a crew, and keep them both alive and happy.

Reducing the proportions of the ship to avoid building what would have essentially been a large empty box drove them to the current design. While the original Mayflower tipped the scale at 180 tonnes, its successor weighs just a fraction of that: only 5 tons. This smaller, lighter design makes it possible to use low power, alternative energy propulsion systems such as wind and solar. (A diesel generator is there only for emergencies.)

The MAS’s hull began construction in Poland on September 2, 2019. It will be delivered to Plymouth in spring 2020 to undergo its final preparation for launch in the fall.

The future of autonomous shipping

Phaneuf sees the ship providing two important functions. One is to carry out research along its journey. MAS will carry three research pods containing an array of sensors, coordinated by the U.K’s Plymouth University, that scientists can use to gather data throughout the voyage. This will help advance understanding in a number of areas such as maritime cybersecurity, marine mammal monitoring, and ocean microplastics. Its onboard sensors include acoustic-, nutrient- and temperature-measurement tools, along with water and air samplers.

Phaneuf describes MAS as existing at the “cusp of a new class of research.” That’s because such ships will make it possible to carry out longer-term research investigations at lower costs. “Building autonomous vessels reduces the cost of the ship and allows us to deploy research assets for longer and more frequently in disparate parts of the world to get more data that would be prohibitively expensive to do traditionally,” he said.

The other is to serve as a shining proof of concept of what is now possible with autonomous shipping. “This is the first of many hundreds or thousands of vessels like this,” he said.

Not every future ship will be self-piloting, of course. While it will make perfect sense for some applications, there are plenty of other scenarios in which humans will still be more than happy to get behind the steering wheel. But even in these leisure scenarios, it is likely that we will increasingly rely on autonomy.

“In about five or 10 years, you could have an A.I. that’s [helping run a] ship,” Phaneuf said. “Maybe it doesn’t have [constant] direct comms with you, but if it detects something unusual in the ocean or the atmosphere, it can say: ‘Maybe my humans would be interested in this. I’m going to deviate from what they sent me to do. Because I know this is important and they’re going to want to know about it. I’m going to rearrange my goals to get this data.’ That’s the kind of place we want to go with this.”

In short, we’ve certainly come a long way in 400 years. Prepare yourself for the new New World.