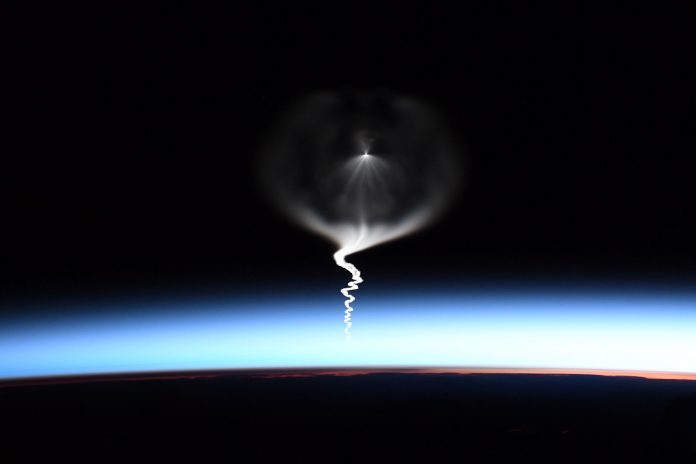 The approach of Soyuz 61, as seen from the International Space Station. Christina H Koch

This week a new group of astronauts launched from the Baikonur Cosmodrome in Kazakhstan headed for the International Space Station. The three new ISS crew members, Jessica Meir of NASA, Oleg Skripochka of Roscosmos, and Hazza Ali Almansoori of the Emirati Space Agency docked with the station several hours later, temporarily taking the population of the station to nine people. That marks the largest crew aboard the ISS since 2015, but members of previous Expedition team 60 will be returning to Earth in around a week.

While the transferring of astronauts to and from the ISS is fairly standard for space agencies these days, there was something special about this mission. Astronaut Christina Koch was looking forward to being joined by her best friend and fellow NASA astronaut Jessica Meir, so she decided to capture an image of the incoming craft from her perspective on board the ISS. The result is the stunning photo above, showing the ghostly trails from the first stage and the cloud of vapor around the craft.

The astronauts traveled aboard a Soyuz MS-15 spacecraft, docking at the station’s Zvezda service module six hours after launch. The crew will stay aboard the ISS for at least six months and will be working on scientific projects in varied fields including biology, physical sciences, and the development of new technologies. They will also perform upgrades to the stations including installing new lithium-ion batteries which collect power from the station’s solar panels, part of an ongoing project to update the ISS’s power system.

Further work planned includes the upgrade and repair of the Alpha Magnetic Spectrometer, the most advanced magnetic spectrometer in space which is used for particle physics experiments. The tool is used to search for dark matter and antimatter, as well as measuring cosmic rays. It cost a staggering $2 billion to install, but a problem with the cooling system has prevented the ISS crew from taking full advantage of it. As it is located outside of the space station, in order to fix the problem the crew will take a series of spacewalks to perform the highly complex repairs.