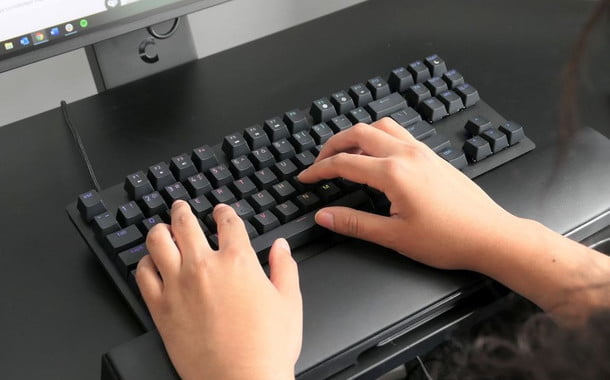 “The Huntsman Tournament Edition is perfect for e-sports, just ok for everything else.”

The original Huntsman does a lot of things right. It’s responsive, satisfyingly clicky, sturdy, and attractive. Razer’s latest addition to the line, the Huntsman Tournament Edition, takes it a step further by iterating on an already solid keyboard. With an even faster key response, replaceable and more durable keys, and slightly more compact design, it delivers on performance and practicality — but loses major points in style along the way.

Razer wants you to know that its latest Huntsman keyboard is made with e-sports players in mind. The Tournament Edition is all about performance and well, it performs. I’m no e-sports legend but, plugging it in for the first time, I felt the difference immediately. I normally use the original Huntsman for PC Gaming at home, so I was surprised by how different the Tournament Edition feels.

The most noticeable difference isn’t the speed, but how the keyboard feels and sounds. The switch to PBT keycaps dulls the satisfying clickiness of the original, which doesn’t feel as good to the touch and is sorely missed. The payoff is the improvement to how it sounds. The original Huntsman is a notorious noise-maker. An intense gaming session can sound like a boxing match with your keyboard. The Huntsman Tournament Edition is whisper-quiet by comparison.

The keys not only sound different but look different, too. They have a textured matte finish that keys your fingertips in place and creates a pleasant sense of friction. The keys are a magnet for dust and pet hair, though, so keep some keyboard cleaner handy if you like to keep your setup looking mint.

A magnet for dust and hair

The keys feel faster as well, which is something I don’t find myself saying often with keyboards that tout “faster actuation.” Your fingers barely have to push the keys for them to respond, and even in cases when I was pressing multiple buttons at the same time, I noticed no delay from the keyboard.

The Tournament Edition performs well. Its style, however, leaves much to be desired. It’s not as customizable as the original Huntsman and lacks the wrist rest of the Elite. The RGB lights are limited to the backlit keys, so it isn’t as vibrant as other Huntsman keyboards. The PBT keycaps add durability and texture but take away from the sleek aluminum matte finish of the base. While the keys are removable and replaceable, the Huntsman Tournament Edition only comes in black, so customization is limited to changing the keycaps.

It doesn’t inspire the premium feel of its kin. It’s hard to justify the $130 price tag when it resembles a keyboard you can pick up on Amazon for $40.

This is a “tenkeyless” keyboard, so it doesn’t include the number pad on the side. That makes it lighter and more compact than the original Huntsman. If you’ll be taking your keyboard with you or need a little extra space on your desk, this design will appeal to you. If you use the number pad often, the tenkeyless design of this keyboard will feel insufficient. The Huntsman Tournament Edition also features a removable braided USB 3.0  cable that feels sturdy and should hold up to rough use.

As for software, the Huntsman Tournament Edition does use Razer Synapse. It offers all the standard keyboard options such as custom key binds, macros, and lighting customization with Chroma Studio support. You can be very meticulous with your settings if you want, but frankly, it’s not all that exciting. It’s a standard inclusion for most modern gaming keyboards, so I wouldn’t call it a standout feature.

There’s also the added convenience of not requiring users to log in to Razer Synapse to access the saved profiles on the keyboard which, if you know Synapse’s penchant for logging users out, makes this small but valuable inclusion a godsend. You do need to at least open the software and sign-in as a guest to assign a stored profile to the keyboard.

The Razer Huntsman Tournament Edition is designed for e-sports. It’s faster than the original Huntsman, and the switch to PBT keycaps makes it more durable. It’s lightweight and compact for frequent trips to gaming tournaments. However, it doesn’t have the style of its older siblings, and that will make it less appealing to most gamers.

No. When it comes to e-sports performance and design, the Razer Huntsman Tournament Edition delivers on exactly what it’s supposed to.

No. I wouldn’t recommend purchasing the Huntsman Tournament Edition because it lacks so many features but still has a high $130 price. You can pick up a Huntsman for about the same as the Tournament Edition is going for now, and you’ll get more for your money.