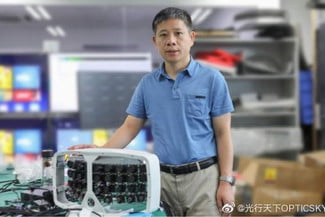 Artificially intelligent cameras can recognize faces, but picking out faces in a crowd becomes a challenge — unless you have 500 megapixels, that is. Researchers from the Fudan University and Changchun Institute of Optics, Fine Mechanics and Physics of the Chinese Academy of Sciences recently unveiled a 500-megapixel security camera they say can pick out faces in crowds of tens of thousands of people.

Unveiled during the International Industry Fair in China, the camera is cloud-connected, and using A.I., tracks people in a crowd. And it does all that, researchers say, in real-time. Details on the camera’s construction were not released, but an image of the device looks like a series of synchronized cameras.

While it is difficult to quantify how much the human eye sees, the group also says that the camera can capture detail that is five times more detailed than the human eye. That’s a big step up from the security cameras where individual faces only amount to a few pixels. The camera doesn’t yet have an official name but is being called the “super camera” for obvious reasons.

The camera may not have overcome all of the hurdles yet to get such a system in place, however. Wirelessly sending 500-megapixel files to a cloud and processing all that data is a gargantuan task.

While the camera is a technical feat, it is also raising questions on privacy. According to ABC News Australia, the camera could be used in China’s Social Credit System that’s currently under development, a program that tracks and assess individual citizens. The system is expected to be enforced by security cameras with facial recognition, and the “super camera” gives those systems even more accuracy.

According to the China News Service, Xiaoyang Zang, one of the camera’s developers, says the camera’s use should be regulated by law.

Camera megapixel counts are growing as sensors improve and computers become better equipped to handle such large files. While the super camera is too giant to be a handheld camera, medium format cameras have reached three-digit megapixel counts, including the 102-megapixel Fujifilm GFX100 and 150-megapixel Phase One XT. Even smartphones are expected to be breaching 100 megapixels with Xiaomi teasing a 108-megapixel smartphone.

A new adventure for the lovable duo.Despite the 2016 re-imagining of the original Ratchet and Clank game, it's been some
Read more
News

Lenovo's 10.1-inch smart display is down to $99 at Walmart. This display normally sells for around $150, which is what
Read more
News

Lenovo's 10.1-inch smart display is down to $99 at Walmart. This display normally sells for around $150, which is what
Read more

The Power of Good Communication Communication is the process of passing information from one person to another and vice...
Read more