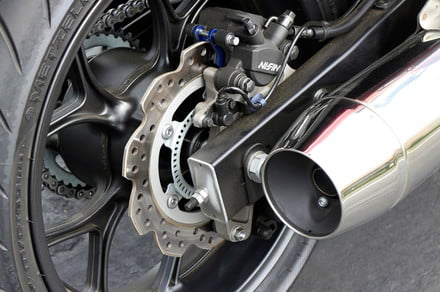 There are cities around the world where a minority of motorcycle riders believe it’s a good idea to rev their engines repeatedly as they ride up and down the street, happily attracting attention with the ensuing racket.

But residents of a suburb of Paris, France have clearly had enough of the annoying practice and are planning to deploy a piece of equipment that it hopes can restore some order to their once-peaceful streets. The box of tricks attaches to a lamppost and is able to identify and pinpoint the position of a loud vehicle while accurately measuring the noise level. When linked up to a police camera, it can also read license plates and issue tickets, Reuters reports.

Dubbed a “noise radar,” the machine is being set up in Villeneuve-le-Roi, a suburb in the south-east of the French capital, and is expected to be switched on soon.

Created by non-profit environmental organization Bruitparif, the device uses four microphones to determine a vehicle’s location and measure noise levels, with the data able to be recorded for later reference.

As Reuters points out in its report, France already has laws in place targeting noisy vehicles but few drivers are caught as police can only apprehend offenders if and when they spot them. The noise radar, on the other hand, would automate the process, making it easier to enforce the rules.

A Villeneuve official said his town had “nothing against Ferraris or Harley Davidsons” per se, but added that their owners “sometimes like to demonstrate their vehicles’ power, and the noise really troubles residents.”

Bruitparif’s machine has also been placed in busy entertainment areas in Paris as part of a trial, but it could be used to start issuing fines before too long.

On the quieter side …

At the other end of the noise scale, the European Union recently enacted a law stipulating that new models of electric vehicles must emit noise at speeds of up to 12.4 mph (20 kph). Car models currently in production won’t need to fall in line until 2021.

The new law aims to make the roads safer as many electric vehicles, as well as hybrids, make hardly any sound when traveling at low speed, a situation that gives cyclists, pedestrians, and the visually impaired little indication of their approach.