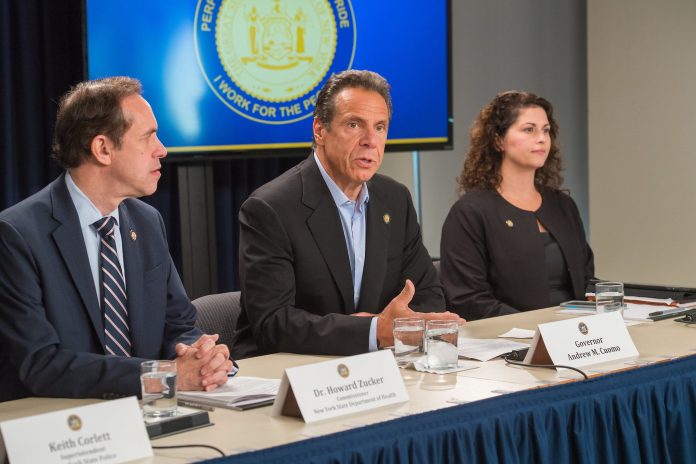 New York Governor Andrew Cuomo announced Sunday that he plans to pursue emergency regulations this week to ban the sale of flavored e-cigarettes.

If successful, New York would be the second to enact such a ban. Michigan banned the products earlier this month.

Cuomo says that the ban is necessary because no only can say what the long-term effects are of vaping, and inhaling steam and chemicals into your lungs, are. The New York Public Health and Health Planning Council, a regulatory body, would issue an emergency regulation to ban the sale of flavored e-cigarettes immediately. New York has had 64 cases of lung disease linked to vaping.

“New York is confronting this crisis head-on and today we are taking another nation-leading step to combat a public health emergency,” Cuomo said Sunday. “Manufacturers of fruit and candy-flavored e-cigarettes are intentionally and recklessly targeting young people, and today we’re taking action to put an end to it. At the same time, unscrupulous stores are knowingly selling vaping products to underage youth — those retailers are now on notice that we are ramping up enforcement and they will be caught and prosecuted.”

Like Cuomo, Trump said his move to ban flavored e-cigarettes is aimed at preventing children and teens from vaping.

“Nobody knows too much about it, but they do know it’s causing a lot of problems,” Trump said about vaping during a White House appearance Wednesday. “People think it’s an easy solution to cigarettes but it turns out that it has its own difficulties.”

U.S. Health and Human Services Secretary Alex Azar has said that the Food and Drug Administration (FDA) is finalizing plans to take flavored e-cigarettes off the market.

It could potentially take the agency several weeks to officially finalize the ban, after which there would be an additional 30 days before it would be effective.

According to Azar, 5 million children in the United States use e-cigarettes. By banning the flavored varieties of the products — especially flavors that appeal to kids — the goal is to help cut down on that number.

In total, six people have died in recent months in vaping-related deaths, across six different states. As of September 6th, 450 are thought to have become ill due to vaping across 33 different states.