Home News NASA develops autonomous drill to search for life beneath the surface of...
News 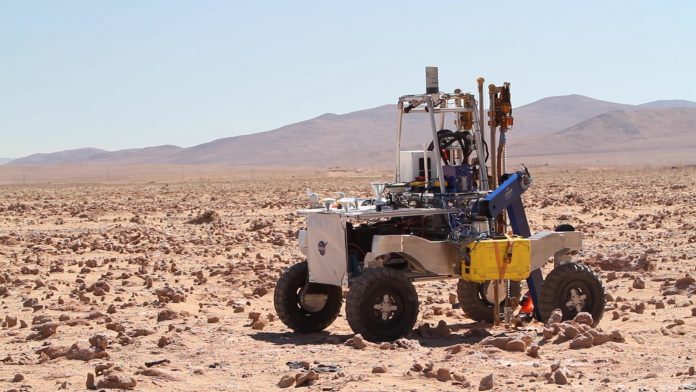 The ARADS rover on deployment in Chile’s Atacama Desert in September 2019. NASA/Campoalto/Victor Robles

One of the challenges of investigating Mars is how to get beneath the planet’s surface. Current projects like the Insight lander come equipped with a drill for placing probes into the Martian rock, but earlier this year Insight’s drill became stuck in the soil and trying to get the lander moving is taking some serious consideration. Upcoming projects like the Mars 2020 lander will be armed with a rotating array of drill bits for munching through the Martian rock and extracting samples.

Now NASA is trying a new approach: An autonomous drill which can go several feet deep and which can adapt to different environments. The project, called the Atacama Rover Astrobiology Drilling Studies (ARADS) is being tested in the Atacama Desert in Chile, the environment on Earth which is most similar to Mars.

“ARADS is all about preparing NASA to search for life on Mars,” Brian Glass, principal investigator for the ARADS program at NASA’s Ames Research Center in Silicon Valley, said in a statement. “Developing the science instruments and robotics we’ll need is a big part of that, and so is figuring out how we actually run the mission. The best way to practice that is to go and do it here on Earth.”

The advantage of the ARADS system over existing drills is that it can operate without real-time human input, by logging data about the soil or rock it is moving through and adjusting its course and drill strength in response. This frees up the scientists to focus on the data the drill is gathering rather than worrying about getting the drill into position. “What’s unique about this drill is that it can take you from dirt to data, all on its own,” Thomas Stucky, the sample-handling software lead for ARADS, explained in the same statement. “All the scientists have to do is point the rover to where it needs to dig, tell the drill how deep to go, and the drill will figure out the rest.”

As the drill can go deeper than previous drills, it may be able to discover important resources such as subterranean water or even aid in the search for potential life on the planet. “If there’s any life on Mars’ subsurface, it’s likely in the form of microbes struggling to live off very trace amounts of water in soil or salt layers,” Arwen Davé, systems engineer for ARADS, said in the statement. “Based on what the drill can tell us about the soil, we can detect where those layers are, maybe even leading us to where the life is.”

Canyon's Grail:ON isn't for the faint of heart, but its top-tier tech and insane range are worth your attention.
Read more
News

This isn't an equation, it's a perception.As smartphone prices continue to rise, discussion of the "value" of phones — both
Read more
News

With its two-tone glass back, knockout camera, and the latest Android software inside, the Google Pixel 3 and 3 XL
Read more

Canyon's Grail:ON isn't for the faint of heart, but its top-tier tech and insane range are worth your attention.
Read more

This isn't an equation, it's a perception.As smartphone prices continue to rise, discussion of the "value" of phones — both
Read more

With its two-tone glass back, knockout camera, and the latest Android software inside, the Google Pixel 3 and 3 XL
Read more

The Samsung Galaxy S20 Ultra is packed with cutting edge features few phones match. But do you need them?
Read more