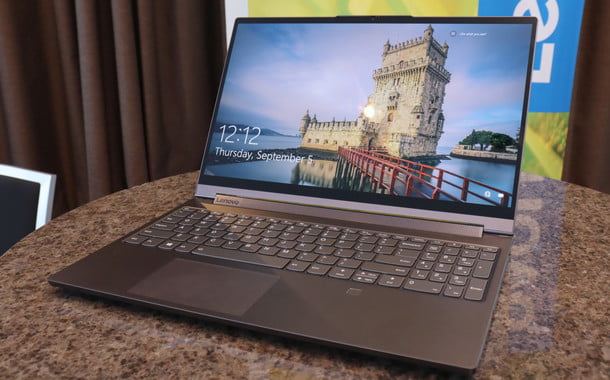 “New components aside, quality of life improvements make the C940 a well rounded modern 2-in-1.”

With a pedigree like the Yoga C930 behind it, the Lenovo Yoga C940 both needed to impress for possible upgraders, and build on strong foundations to be a worthwhile purchase for potential new buyers.

It brings the typical generational hardware improvements like a new 10th-generation Intel Ice Lake CPU and an Nvidia GTX 1650 for those who want more graphical power. But it’s the small stuff that could best define this new Yoga 2-in-1, with light tweaks to sound, hinge design, and lid shape.

With Intel selling eighth, ninth, and two 10th-generations of CPUs simultaneously, there’s some real potential for confusion in the marketplace. Lenovo is taking full advantage of that broad range of chips throughout its product range, but the C940 keeps things relatively simple by only offering two generations and it splits them by size.

The 14-inch Yoga C940 features the newest development from Intel in the form of 10th-generation, 10nm Ice Lake processors, in either a Core i5 or Core i7 variant. Both feature Intel’s UHD 900-series graphics, rather than the more capable Iris Plus option, which was a shame to see, but there’s much more graphical power available in the 15-inch version.

That model comes equipped with Intel ninth-generation Core i7 or Core i9 CPUs, offering up to eight-cores for some additional processing grunt. They can be paired up with an optional Nvidia GTX 1650 too, for great entry-level gaming ability that will far outstrip anything the Intel onboard solutions can offer.

All models offer up to 16GB of RAM, though the 15-inch model has the option of up to 2TB of PCIe storage, while the 14-inch version is limited to a terabyte.

A major selling point of the Yoga C930 was the Dolby Atmos soundbar that Lenovo built into the hinge, offering forward-facing audio in whatever configuration you had it. We loved it the first time around and are happy to see it back with the C940, but this time, Lenovo has taken it even further. The C940 also has a built-in a pair of speakers on the underside of the body, giving a little more bass to the overall sound.

The sound bar still doubles as the hinge makes sure to keep the audio facing you at all times and delivers a great 3D sound experience in small to medium-sized rooms. But now, there are also underside speakers built in beneath to fill out the overall sound profile. This is especially helpful in clamshell mode, providing some extra oomph over last year’s model. 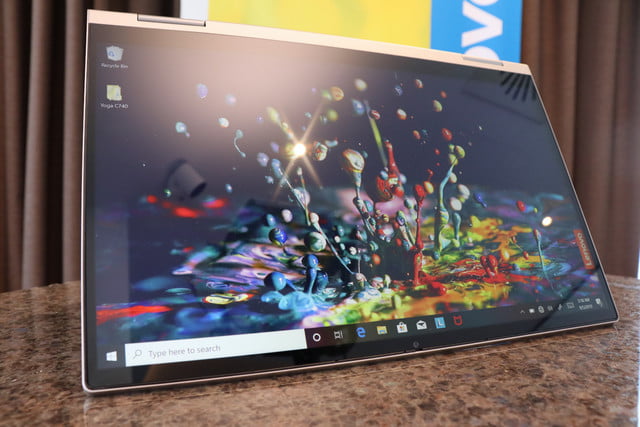 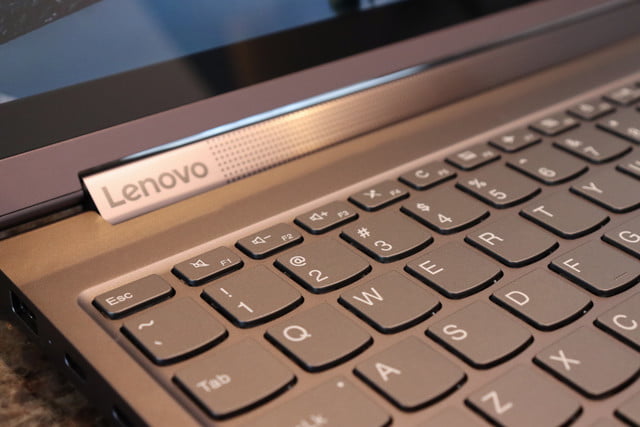 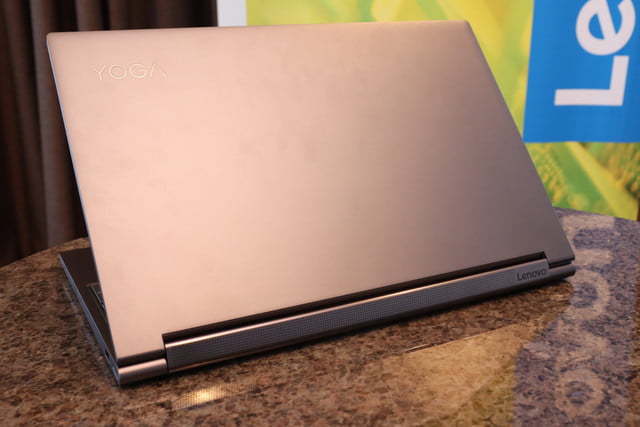 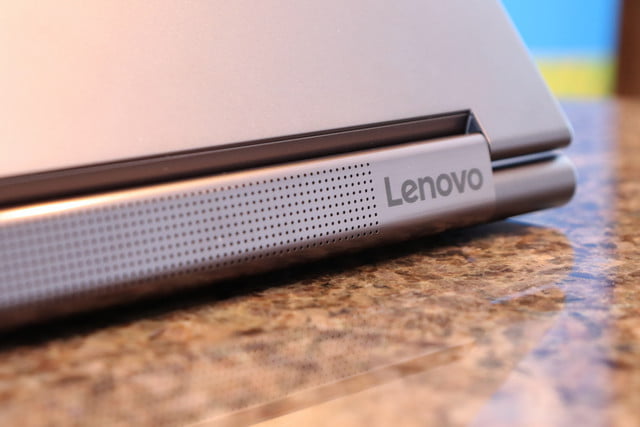 Last year, we weren’t particularly impressed with the display on the C930, finding it a bit washed out in subjective testing, and lacking contrast in our synthetic tests. Our test model of the C940 looked noticeably better, despite harsh hotel lighting, with rich colors, and moderately deep blacks.

We can’t attest to whether the same quality can be found in both the 1080p and 4K panels, but it appears Lenovo has made some improvements on this front which was good to see. The 1080p panels offer between 400 and 500 nits peak brightness (on 14-inch and 15-inch models, respectively) while the 4K screens deliver 500 nits brightness and HDR support.

The hinge on the Yoga C930 was one of our favorite parts of it. That remains true with the C940. It’s strong and versatile, retaining a rigidity in all 2-in-1 configurations, without making it difficult to adjust between them. It looks a little different this time around too, with Lenovo switching to a more unibody look. This change doesn’t affect the great audio quality, nor the strength of its rotation, but gives a cleaner overall look that’s pleasing to the eye.

The 14-inch model weighs in at just under three pounds, so is the easier of the two C940s to adjust, but the 15-inch model isn’t much more at just over four pounds. Both are easy to handle, although if you’re planning to use yours in tablet mode regularly, the 14-inch variant will be more comfortable over longer periods.

Ports remain unchanged from the C930, with a pair of USB-C 3.1 Gen 2 ports with Thunderbolt 3 compatibility on one side, and a legacy USB-A 3.1 Gen 2 port on the other, alongside a 3.5mm headphone jack. We’re glad to see that latter connection option retained, as it’s becoming all too rare in contemporary notebooks.

As a final quality-of-life improvement with the C940, Lenovo has tweaked the design of its lid. There’s now an angular protrusion in the center, just above the webcam that measures a few inches across. It makes it far easier to get a grip on the otherwise svelte lid, easing opening it with one hand.

The 14-inch Lenovo Yoga C940 is one of the first laptops to receive the official Intel “Engineered for Mobile Performance,” badge, otherwise known as being Project Athena certified. This is designed to give consumers a realistic idea of what they can expect from a number of useful metrics like battery life, performance, and wake from standby responsiveness.

While we had no concerns over performance with the C940 based on its hardware makeup, battery life approval is more noteworthy. With no ability to put it through its paces in our typical battery life tests just yet, getting the nod from Intel’s Athena program gives us confidence that Lenovo’s own battery life numbers aren’t necessarily just best case scenario.

Lenovo claims that the 14-inch model can achieve up to 17.5 hours and nine hours for the 1080p and 4K models, respectively. The 15-inch version offers 12 and nine hours with the same screen configurations. All models support rapid charging for up to two hours of battery life in just 15 minutes.

Although we don’t know why, the 15-inch model has yet to be certified in Intel’s program.

Modest improvements tick all the boxes

The Lenovo Yoga C940 is no revolution, but it builds on the greatest strengths of its predecessor, making it an all round better device. It has slightly better audio, a better looking hinge, and enjoys the latest offerings from both Intel and Nvidia in terms of processor and graphics.

The C940 is a versatile and well rounded device that isn’t worth upgrading to if you have a recent generation of Lenovo 2-in-1, but if you’re looking for something new, there’s little reason to opt for what’s come before.