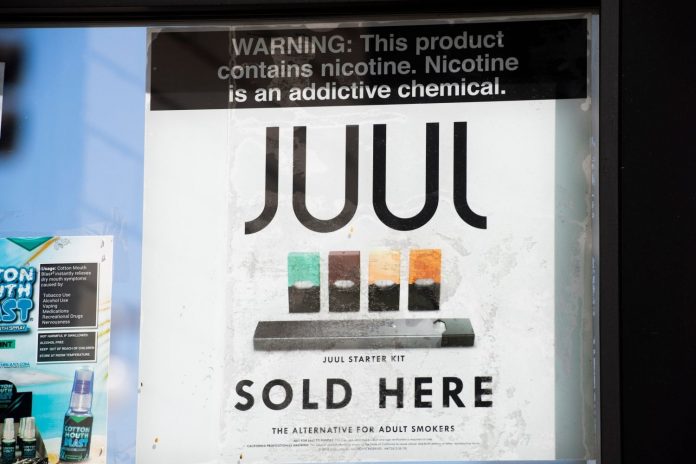 Juul Labs CEO Kevin Burns stepped down from his position at the e-cigarette company on Wednesday amid widespread vaping-related illnesses and deaths, along with multiple investigations into the company by federal agencies.

The company also announced that it would suspend all print, broadcast, and digital advertising in the U.S. for the time being.

K.C. Crosthwaite will replace Burns as CEO effective immediately, according to an announcement on the company’s website. Crosthwaite was the chief growth officer for Altria, the tobacco company that bought a 35% stake in Juul last year.

As the single largest e-cigarette company in the United States, Juul has been at the center of controversy surrounding vaping-related illnesses that have lead to the deaths of at least nine people. On Monday, the Wall Street Journal reported that federal authorities announced a criminal investigation against Juul.

The company is also facing criminal probes from the Federal Trade Commission (FTC) and the Food and Drug Administration (FDA) investigations, as well as probes by multiple state officials. Both state attorneys generals and the FTC are looking into whether Juul targeted minors with its marketing and flavored e-cigarettes.

In an interview with Time Magazine in July, Burns addressed the health and youth vaping controversy by saying that: “Shit happens. We’ve got to respond. I would love it to be less dynamic here than it is, because it’s not easy on the organization. But I think the organization understands that we’re at the forefront here and it’s going to be volatile.”

Juul advertises its vaping products as being a safer and healthier substitution to traditional cigarette smoking. However, studies consistently show e-cigarette smokers are less likely to quit than regular smokers who have never used these kinds of devices.

Experts say that it’s still too early to tell about the long-term effects vaping has on the body.

“Working at JUUL Labs has been an honor and I still believe the company’s mission of eliminating combustible cigarettes is vitally important. I am very proud of my team’s efforts to lead the industry toward much needed category-wide action to tackle underage usage of these products, which are intended for adult smokers only,” Burns said in the company’s official announcement. “Since joining JUUL Labs, I have worked non-stop, helping turn a small firm into a worldwide business, so a few weeks ago I decided that now was the right time for me to step down.”

Crosthwaite said in a separate statement his plans to tackle move forward with the company in a time when vaping is being seen negatively by the public.

“Against that backdrop, we must strive to work with regulators, policymakers and other stakeholders, and earn the trust of the societies in which we operate. That includes inviting an open dialogue, listening to others and being responsive to their concerns,” Crosthwaite said.

A study conducted on vaping by the American Journal of Preventative Medicine took a look specifically at Juul products. The study looked at flavoring chemicals known as acetals that are added into flavored e-cigarette products.

According to NPR, acetals can be found in small amounts of food and other commercial products, but the effects of inhaling such chemicals are not yet fully known and are still being studied.

Digital Trends reached out to Juul for further comment, and we’ll update this story if we hear back.