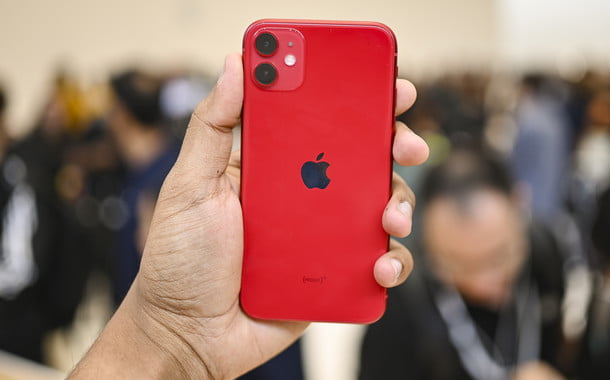 iPhone 11 hands-on review: The iPhone XR gets a refresh

“The iPhone 11 is all the phone most people will need.”

Bumps on bumps on bumps. That’s what the rear design on the iPhone 11 feels and looks like. There’s a large camera module to house the new dual-camera system, and the lenses in it stick out a little more too, literally and visually. They look gigantic, though at least they’re not as distracting as the triple-camera system on the Pro models.

I think masking all the lenses — as Huawei did with the Mate 20 Pro — would make the iPhone 11 nicer. At the least, the camera module could sit flush with the rest of the back.

Cameras aside, I love the new color options, and there are six to choose from; purple, white, yellow, green, black, and Product (Red). The back of the iPhone 11 is even more minimalist than before as it no longer says “iPhone,” and it’s a welcome change.

I wish Apple brought over the matte glass look that’s on the Pro models, because the iPhone 11 is glossy, reflects a lot of light, and is a fingerprint magnet. Some of the colors hide fingerprints better than others, but the matte texture on the Pro models feels superior in every way. It does have the same IP68 water resistance rating, and it’s improved over the iPhone XR. It can now stay up to 2 meters underwater for 30 minutes, as opposed to just 1 meter.

The display is just good enough

Speaking of the screen, that’s one of the biggest differentiators between the iPhone 11 and the Pro. It’s LCD for starters, so you don’t get the deep blacks afforded by the OLED panels on the more expensive phones. There’s also a lower 1,792 x 828 resolution, and because it’s not using the new Super Retina XDR technology, you’re not going to see as much contrast, it’s not going to get as bright (625 nits, versus 800 on the Pro models), and there’s no HDR support.

But as I said in my iPhone XR review, most people will be satisfied with the display. If you look closely, yes, you will see pixels. But at a reasonable viewing distance, content looks sharp. The slightly thicker bezels are still a little off-putting, but at least they’re uniform, unlike some Android phones that have a bigger bottom bezel than at the top.

At the same time, the OnePlus 7 Pro — which costs less — packs a higher resolution screen, a 90Hz refresh rate for a more fluid experience, has a truly bezel-less screen, and an OLED screen.

There’s spatial audio via the speakers and support for Dolby Atmos. While playing a game, I cranked up the volume and was surprised at how much I was able to hear while being surrounded by dozens of people in a loud environment. Audio quality will require a little more testing.

Another difference is the aluminum frame. The Pro models use stainless steel, which is more durable and scratch-resistant, so if durability is a concern you should put the Pro versions at the top of your list. That said, all three iPhones are still sandwiched in glass, and even if Apple calls it “strengthened” glass, it will likely still shatter in the event of an accidental drop.

The single-lens setup on the iPhone XR feels a little limiting at times, especially when competitors are pulling mutil-lens camera setups on significantly cheaper phones. While two lenses aren’t groundbreaking, it does add versatility to the new iPhone 11.

It’s a 12-megapixel standard lens with an f/1.8 aperture joined with a 12-megapixel ultra-wide-angle lens with an f/2.4 aperture and a 120-degree field of view, so you’re able to get a whole lot more in the frame. Switching to this lens is seamless, with focus points staying the same, and the animation is fluid, too. Slide your finger to go back and forth, or just tap an icon.

Portrait Mode can now recognize pets — a limitation due to the single-lens nature of the iPhone XR — and there’s also now a Portrait Lighting feature called High Key Mono. It’s a neat new effect, but I’m more enthralled by the new “slofies” feature, enabled by the 12-megapixel front-facing camera. It means slow-motion selfies, and it’s shot at 120 frames per second at 1080p. It’s a fun new way to take selfie videos, and the effect is fun.

You do get improved Smart HDR, which should mean better-looking photos in high-contrast lighting scenarios, as well as a new Night Mode. That feature, also present on the iPhone 11 Pro, takes a long exposure automatically when it detects poor lighting, enabling the cameras to take shareable photos at night. The hands-on area was too bright to test this feature, but I did notice you are able to choose the length of the long exposure.

There is another camera feature called Deep Fusion coming later this year, which enables the neural engine to reduce noise and improve detail on each individual pixel for even superior low-light photography, but it’s unclear if this is coming to the iPhone 11 or just the Pro models (something tells me it’s just for the latter).

Thankfully, many of the pro video features on the iPhone 11 Pro remain on the iPhone 11, including capturing 4K 60FPS video, extended dynamic range, and “cinematic” stabilization for super fluid-looking footage.

Performance and battery life are highlights

Despite lacking the Pro moniker, the iPhone 11 is just as powerful as its more expensive brothers. That’s because it’s powered by the same Apple A13 Bionic chipset, which Apple is touting as the fastest mobile processor available today. In my brief time with the phone, using iOS 13 felt fluid and apps were quick to launch. Pascal’s Wager, a new game, performed similarly as the iPhone 11 Pro models.

While the dual camera setup isn’t groundbreaking, it adds versatility.

While the iPhone 11 supports fast charging, unlike the Pro models, the fast charger doesn’t come in the box — you need to buy it separately. It sucks that it’s not included as most Android phones package it in, including the ultra-fast charging OnePlus 7 Pro, which costs $679. There’s no good reason Apple couldn’t include it here.  Thankfully, wireless charging remains.

The iPhone 11 is a strong option at $699, and it’s the right buy for most people looking to upgrade their iPhone. If you bought an iPhone last year or have the iPhone X, you should hold onto your phone for another year as the upgrades likely aren’t worthwhile (unless you’re on the iPhone upgrade program). It doesn’t have all the bells and whistles, but it will be more than satisfactory for people looking for an affordable, new iPhone.