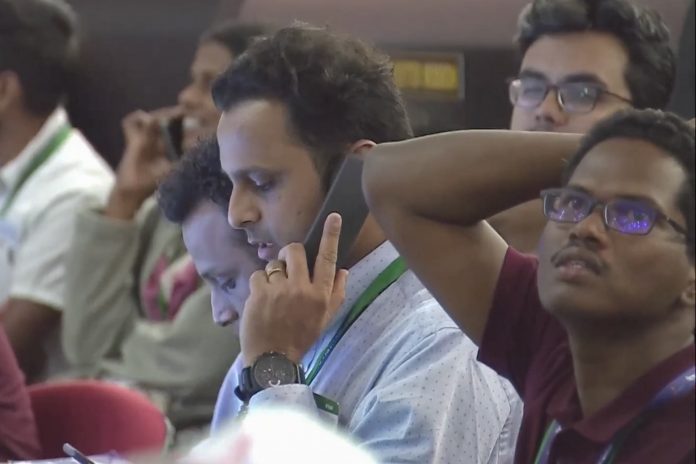 India’s space agency lost contact with its Chandrayaan-2 moon lander Friday as it attempted to do what it was made for: Land on the moon.

The robotic lander — nicknamed Vikram — attempted to descend to the moon’s south pole just after 1 p.m. PT, making it part of the way before the Indian Space Research Organization (ISRO) lost communication with it. The agency ended its livestream of mission control shortly after it lost contact with the spacecraft — but not before showing the despondent-looking faces of the mission control crew back on Earth.

It’s not clear whether the lander actually made it to the surface of the moon — we’ve asked the ISRO for more information, but it’s unlikely even they know the status of the lander. It could have crash-landed, or possibly is just experiencing a communication failure. Signals from the lander cut out as it entered its final braking phase and hit an altitude of 2.1 kilometers, or 1.3 miles, above the moon’s surface.

“Vikram lander descent was as planned and normal performance was observed up to an altitude of 2.1 km,” the ISRO wrote on Twitter. “Subsequently, communication from Lander to the ground stations was lost. Data is being analyzed.”

This is Mission Control Centre. #VikramLander descent was as planned and normal performance was observed up to an altitude of 2.1 km. Subsequently, communication from Lander to the ground stations was lost. Data is being analyzed.#ISRO

The incident — it’s not quite safe to call it a crash yet — took place during what India space program director K. Sivan described as the “15 minutes of terror,” a computer-controlled sequence that the lander only had one shot to get right. Unfortunately, it looks like those 15 minutes didn’t go well.

India had wanted to become the fourth country to land on the surface of the moon, joining Russia, China, and the United States. The lander carried a rover that was meant to explore the moon’s south pole and search for signs of water.

If the lander did crash, it would be the second one to hit the moon’s surface this year. In April, Israel’s uncrewed Beresheet spacecraft crashed just minutes before it was due to touch down. Several other countries have their own moon missions in the works, including China, Russia, Japan, and Israel.

The Chandrayaan-2 mission is not a complete failure at this point — there’s still an orbiter above the moon, which will remain there for about a year and send valuable data back to Earth.

This is a breaking news story and will be updated with the latest information.