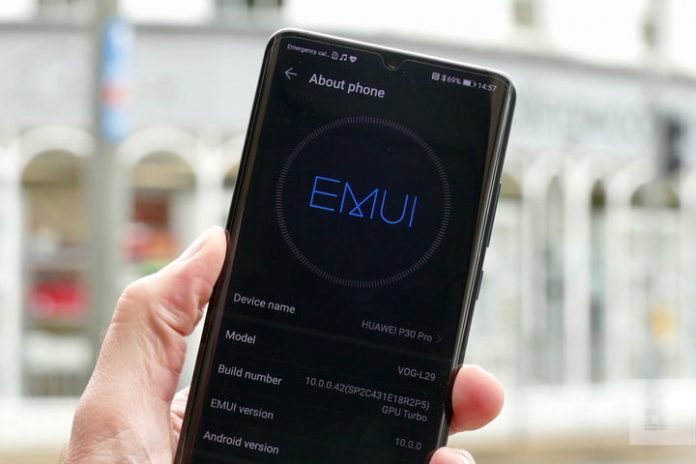 “This is an important milestone in Huawei’s software development.” That’s how Wang Chenglu, Huawei’s president of consumer software, described EMUI 10, the latest version of its mobile user interface (UI).

It’s not just a throwaway statement hyping up the new release either. EMUI 10 has graduated from being a simple user interface placed over the top of Google Android. The line has blurred between it and HarmonyOS, Huawei’s much-discussed operating system designed for everything from smartwatches to cars.

What you’re looking at with EMUI 10 is essentially HarmonyOS, because part of the innovation inside HarmonyOS is that it doesn’t have a single, defined visual form. Dig deeper under the surface though, and there are only a few differences separating the two Huawei-created software platforms.

EMUI is no longer just another UI over Android. It’s a greater part of Huawei’s brand, identity, and future than ever before.

Digital Trends attended a briefing on EMUI 10, where the new features were discussed and an update schedule was released. Huawei began by talking about what EMUI has achieved before, with previous versions concentrating on improving gaming performance and decreasing Android performance degradation over time. EMUI 10 is considerably more ambitious. Wang said it’s “rethinking UX, devices, and performance” with EMUI 10. This was the first hint of just how closely it is tied to HarmonyOS.

The detailed description of EMUI 10 that followed was almost identical to Huawei’s HarmonyOS vision — the desire to fix the siloed ecosystem problem that plagues today’s range of connected devices. EMUI 10 is suitable for use on everything from watches to cars, has a distributed security system, and developers can make one app that will work across all device and screen types. The seamlessness envisaged by Huawei with HarmonyOS — where all devices talk to each other and intelligently interact — is present in EMUI 10 too.

However, while the similarities are stark and obvious when you’re familiar with Huawei’s vision with HarmonyOS, EMUI 10 is still primarily built to be used over the top of Android. Wang was quick to point out that Huawei wants to continue working with Google and using Android, and all the features demonstrated were from EMUI 10, and not HarmonyOS.

But where does EMUI 10 end and HarmonyOS begin?

Digital Trends spoke toWang after the presentation for further insight. He first explained that HarmonyOS uses a decoupled architecture, where about 1,000 internal modules have a special tag to indicate whether it’s suitable for the new hardware on which it’s installed. For example, in-car systems will have different requirements than a television, and HarmonyOS intelligently works this out without developer assistance.

Using these tags, “HarmonyOS generates the operating system interface based on the profile of our hardware,” he said, meaning in the future, the software will not need to be individually customized for new hardware. It just does it itself.

This will not be part of EMUI 10 or any Android-based software developed by Huawei. It doesn’t need to be, because Android is there. Without Android, HarmonyOS and its tags run the show, creating its interface based on specific hardware requirements. We can look at EMUI 10 and say it’s probably visually like HarmonyOS, but that’s only because HarmonyOS will be whatever it needs to be. It’s the Gozer the Gozerian of the software world.

Otherwise, the differences between the two are few and far between. EMUI 10 will only have 20% of the virtualization and distribution capability, and instead of a single system, the Integrated Development Environment (IDE) will support both HarmonyOS and Android.

What’s new in EMUI 10? Wang went through some of the fascinating user interface and experience design alterations, and it’s a lot more than cobbling together some icons and hoping for the best. Or at least it should be. I learned this while speaking to Huawei when EMUI 9 was released, and the detail that has gone into designing EMUI 10 shows the company is still as committed as ever to making the UI the best it can.

The new systemwide Dark Mode is much more than just an inversion of the colors. The Huawei Human Factors Lab used the Web Content Accessibility Guidelines (WCAG) version 2.1 to tune the color levels for maximum reading efficiency and the least strain on your eyes, The result is a softer tone to some of the colors than you may expect. The same attention to detail went into the speed of the animations, with Huawei settling on a 400ms rate, after research showed this was the most comfortable for your eyes.

A “magazine-style” design has been used for the new look, which introduces more white space and reduces clutter on screen. It does mean less information is shown on a single screen though, so for example, four vertical list icons may be shown in EMUI 10, where it would have been five in EMUI 9. Colorful icons are used where black outlines were before (see the weather app for an example), and there is wider spacing for the bolder fonts.

Returning to the similarities with HarmonyOS, EMUI 10 builds on Huawei’s desire to make interdevice syncing easier than ever before. It has expanded its desktop integration in EMUI 10, which uses the OneHop connection system to connect. This is a key difference between the Android-based EMUI 10 and any future HarmonyOS products working together. A “handshake” needs to happen with EMUI 10 on Android for it to connect to another device (in this case, a tap to initialize NFC), but no such action will be needed for HarmonyOS-to-HarmonyOS devices.

It looked great in our demonstration. Link EMUI 10 with a Windows laptop and you get a virtual Android home screen on your computer display, with features including copy and pasting text from one device to another. You can also drag photos across, edit them on the PC, and then attach them to an email on your phone. The demonstration was superb, and worked without delay or issue.

EMUI 10 will have some additional features on devices equipped with the new Kirin 990 processor, including some cool animations on the always-on-display.

It’s becoming increasingly possible that HarmonyOS will need to be used on a Huawei smartphone without Android in the near future. The ever-confident Huawei isn’t worried. Wang said he’s certain EMUI 10 will be even more powerful with HarmonyOS. Huawei is also preparing a range of apps to replace those that come with Android integration, including exploring the option of using Baidu Maps, TomTom, or Here Maps instead of Google Maps.

But what about those who want to use Google apps, but can’t because they don’t come pre-installed? Huawei isn’t going to facilitate you getting them. Wang said: “We will let the consumer explore the possibilities of adding Google apps, in the eventuality they’re not there.” The version of EMUI 10 I have tested is based on Android 10, and had the complete range of Android apps and Google services installed.

When can we expect EMUI 10 to arrive? It’s available as a beta for the Huawei P30 Pro starting September 8, and will also be used on the Mate 30 series set to be announced on September 19. Whether Google apps will be there is currently unknown. Beyond this, more than 30 Huawei and Honor phones will be upgraded. The P30 and P30 Pro will be first in November, followed by the complete Mate 20 Pro line and associated models, plus the Honor 20, 20 Pro, and View 20 coming in December. Other models will receive the update in 2020.