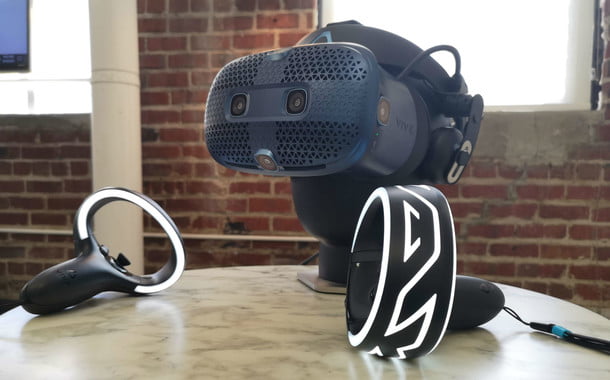 VR desperately needs to get into the hands of more people. Facebook’s solution is to make Oculus headsets cheaper and free from the constrains of a PC.

The other industry-leader, HTC, has a different idea: Make headsets convenient to set up and easier to try out without diminishing the quality of the immersion.

That’s where the unique design of the $699 HTC Vive Cosmos comes in. But does this high-end headset have enough tricks up its sleeve to truly take VR to the next level?

VR is all about escaping to another world. Thanks to the high resolution of headset like the Cosmos and Vive Pro, gaming and exploratory experiences like the museum title VR Museum of Fine Art feel more immersive than ever. But the Cosmos on getting you in and out of that world quicker.

The first is a flip-up display, allowing the goggle portion of the headset to lift up without having to pull the entire system off.

The Cosmos shares the same halo mounting ring as the Vive Pro to evenly distribute its weight across your head for comfort, but the lift-up design makes it easier to put on the glasses.

For wearers of corrective glasses, putting the halo ring on your head with the display lifted out, and then pulling down the screen like a welder’s mask, makes donning goggles less claustrophobic. Even if you don’t wear glasses, this design reduces the friction of entering VR, as it’s far more comfortable than jimmying your face into the narrow opening of most goggles.

Being able to lift up the screen made the experience VR less isolating and more social.

In my hour-long demo with the Vive Cosmos in HTC’s San Francisco, California studio prior to its launch, I found that with being able to lift up the screen, the experience of VR became less isolating and more social. You can quickly engage with those in the same room.

If you’re a developer, the feature allows you to code and quickly check your work in VR without having to fully take off the headset. For the well-coiffed, it helps to save your do from repeated donning and doffing. This simple feature makes a big difference in usability, and it’s noteworthy enough that others ought to emulate.

HTC also used the flip-up design for the audio experience, and the built-in headphone cups also flip out like they do on the Vive Pro. Having headphones built into the headset makes it easy to get immersive audio without the hassle of having to put on yet another separate accessory. The on-ear cup design makes for a comfortable experience and doesn’t fatigue your ears for long VR sessions.

The second thing the Cosmos does to make VR much more convenient to set up by doing away with the external sensors needed for other headsets.

Banish the stalking trackers (if you want)

On the Cosmos, HTC switched from the outside-in tracking with external sensors on the Vive and Vive Pro in favor of inside-out cameras that are mounted on the Cosmos. The Cosmos ships with a total of six cameras – four on the headset, with two additional cameras located on the front removable faceplate – that provide for 310 degrees of tracking.

This is limited compared to the 360-degree tracking when using external sensors, though it’s still accurate and responsive. Most importantly, you’ll likely appreciate not having to place sensors around their living rooms. After you calibrate your living room to definte the borders of your VR space, these cameras track both your position in the virtual world.

It’s all done using the new remote controls, which come with triggers, side controls, joystick, and more buttons for gaming. When the controllers are in front or to your sides within view of the cameras, the system had no problem tracking hand positions. A patterned ring of light on the controllers help the VGA-resolution camera maintain tracking even in darkened environments.

Where the Cosmos struggles is if you’re lifting your arm back behind your head out of camera view. When this happens, the gyroscope kicks in, and the Cosmos software begins to approximate the positioning of the controllers. When the controllers re-enter the cameras’ field of view, it takes less than a second for normal tracking to resume. The accelerometer-based approximation wasn’t always accurate, but it did a good enough job on most of the basic VR titles I tested.

The feature is more than just a cool party trick, it’ll actually save you from tripping on furniture.

Setting up a border for your VR space is crucial, as it keeps you from stumbling into furniture. When you’re approaching the borders with the Cosmos on, you’ll see a walled grid of green lines. Peering your head through the grid, Cosmos’ mixed reality experience kicks in. The cameras turn on, and you’ll be able to see the physical world through the lens of VR. The feature is more than just a cool party trick, it’ll actually save your from tripping on furniture.

If you prefer the traditional Vive trackers, HTC will sell a modular Cosmos External Tracking Mod that swaps out two of the cameras on the front to work with legacy tracking sensors. More mods are planned for the future to expand the capabilities of the Cosmos, though initially they’ll be limited to first-party HTC designs.

High resolution displays have been the holy grail of VR. The higher the resolution, the more immersive your experience will be. Compared to the original Vive, resolution on the Cosmos has increased by 88 percent, and the new full RGB sub-pixel LCD screens help drive a 40 percent improvement in optical clarity.

At 1,440 x 1,700 pixels per eye, the Cosmos shares a similar resolution to the AMOLED screens on the Vive Pro, which has one of the best VR displays. For comparison, the Rift S tops out at 1,280 x 1,440 pixels per eye. The higher resolution is definitely appreciated on the Cosmos, and images appeared crisp, with text looking noticeably sharper.

When comparing the experience of theBlue on the original Vive with the Cosmos, the latter came with dramatically better visual fidelity. Standing on an underwater shipwreck to watch fishes, rays, and a giant blue whale pass by, looks like an animated feature akin to Disney’s 1994 version of The Lion King on the original Vive, while the same scene looked more realistic, similar to what Disney accomplished on the 2019 live action re-release of the same film, on Cosmos. Details like the whale’s right eye appeared more life-like, making for a more immersive VR experience.

Both headsets share the same 110-degree FOV (field of view), though. A wider FOV has been a common request with these high-end headsets, still not quite replicating the FOV of the human eye. The dual 3.4-inch displays on the Cosmos also benefit from a 90Hz refresh rate, each delivering a maximum framerate of 90 FPS. The refresh rate helps to reduce screen door effects and tearing, but it also helps to prevent nausea.

The Cosmos doesn’t support diopter adjustments, so you’ll still need your real glasses to see in the virtual world. Unlike the Vive Pro Eye, eye tracking is also missing on the Cosmos, so everything is rendered in full resolution. Absent of this feature, that also means no foveated rendering, either.

Lightweight for the heavyweight

The halo mounting system really helps to make the Vive comfortable to use, even though it’s not the lightest headset on the market. At 655 grams, it’s lighter than the 1.7-pound Vive Pro, but it’s still 0.3 pounds heavier than the competing Oculus Rift S. A removable top strap that runs down the center from the front to the back helps to stabilize the headset, and the headset’s weight felt manageable on my head.

Even though the headset itself was comfortable to wear, the bundled cord containing the USB and DisplayPort 1.2 cables that tethered the Cosmos to the Alienware Aurora R8 tugged down when I was walking around, making it feel heavier than it actually is.

If you’re chasing enemies in VR, the cable can become obtrusive.

HTC claimed that despite a jump in resolution, the basic PC requirements have not changed from the original Vive to the Cosmos. To get the best experience, however, our demos were powered by a high-powered Alienware Aurora R8 gaming PC equipped with a Core i9 processor and RTX 2080 Ti graphics. Even though you’ll be fine with GTX 970 graphics, framerates can skip or drop on lower-end hardware, as HTC is optimizing for the 90Hz refresh rate.

In general, the cable isn’t too bothersome for slower VR experiences, like the underwater theBlue, which allows you to view the undersea world. However, if you’re chasing enemies in VR, the cable can become obtrusive, and I did find myself stepping on the cord on more than one occasion during my demo. If this is a concern, you can also pick up HTC’s Vive Wireless Adapter, though that’ll cost you an extra $300.

So far, the Vive Cosmos doesn’t feel like a VR revolution. Instead, it’s iterative update to the Vive and Vive Pro. At $699, it’s for enthusiasts only — and probably not worth an upgrade if you were an early adopter of the Vive. For those looking to dive into immersive VR for the first time, though, it’ll be one of the best options available when it goes on sale globally on October 3.