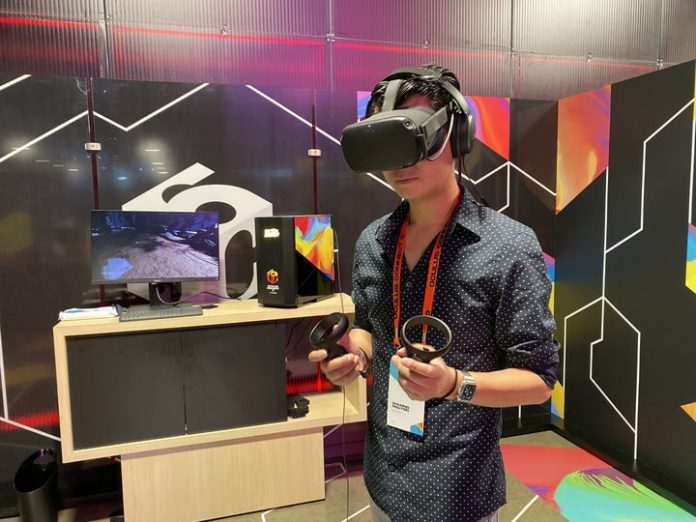 Oculus announced that it will release a USB-C cable and an important software update that will transform the Quest into a VR headset that behaves just like the company’s premium Rift S head-mounted goggles.

A year ago when Quest was unveiled at Facebook’s Oculus Connect, the midrange headset promised a compelling stand-alone experience that freed users from the entanglements of cords or the requirements of a capable PC, but Quest owners had to rely on a separate library of stand-alone VR titles. However, when Oculus Link lands, Quest owners will be able to take advantage of most titles developed for Rift and Rift S — Facebook staff on hand were not able to disclose why certain titles may not function.

By connecting a USB-C 3.0 cable — it can’t be a slower USB 2.0 cable — to your headset, you’ll be able to experience even newer Rift games, like the Stormland title that was announced at Oculus Connect 6 this year. Similar to Fortnite in VR, Stormland looked great when I previewed it on the Rift S. Even though I entered the Oculus Link demo a bit concerned that the Quest’s anemic smartphone-based hardware may limit the game’s potential when the headset is tethered to a USB-C cable, I was fortunately proven wrong, and the game excelled.

The demo ran on Falcon Northwest’s Talon 20th Anniversary Edition with high-end internals, and it felt just as smooth on the Rift S as it did on the Quest. Given that the Quest has a higher 1,440 x 1600-pixel per-eye resolution compared to the 1,280 x 1,440 per-eye resolution on the Rift S, the game definitely looks crisper on the Quest — despite its midrange positioning inside Facebook’s Oculus lineup.

In fact, the overall experience was very comparable to the more premium Rift S, and I didn’t envounter any lags, stutters, or screen tearing. The AMOLED screen on the Quest was definitely a big benefit, displaying vibrant colors in the jungle environment and deep, inky black tones.

On the Rift S, I noticed a slight screen door effect, but it wasn’t too apparent unless you’re specifically focused on detecting pixelation. And even though the Rift S has a higher screen refresh rate designed to mitigate motion sickness, I didn’t experience motion sickness or screen tearing on the Quest, even when moving around through faster portions of the game. When playing Stormland on Quest with Link, Oculus staff stated that the game’s refresh rate will be capped at what the Quest is capable of displaying.

Essentially with Link — a USB-C cable that’s expected to cost less than $100 when it launches, but you can even provide your own cable should you wish to go off-brand — Facebook made a better Oculus Rift S out of the Quest. You’re getting a similarly immersive gaming experience in VR on the Quest as you would on the Rift S, but you benefit from the Quest’s higher-resolution displays.

Facebook claimed that it wanted to provide its own fiber-optic USB-C cable to ensure that VR wearers have a long enough cord, and that the cable itself is flexible enough to use for comfortable and long sessions of virtual world exploration.

Details are still scarce right now given that everything is running on preproduction software, but I was informed that the USB-C cable could be connected either directly to the slot on the graphics card or to the motherboard. Demo staff stated that part of the game’s rendering will be done on the Quest itself, and the remaining part on the PC, though they weren’t able to provide details on which portion will get processed or rendered natively on the headset.

From comments made by staff, it seems that the USB-C cable isn’t just a pass-through display cable, so the hardware on the headset will be still doing some work. Additionally, the demo staff was not able to confirm if Virtual Link support is a requirement when asked.

I had no issues with performance given that Link was running on powerful PC from boutique manufacturer Falcon Northwest. However, at this point, it’s unclear how performance will scale on more modest systems when Link and its accompanying software update launch.