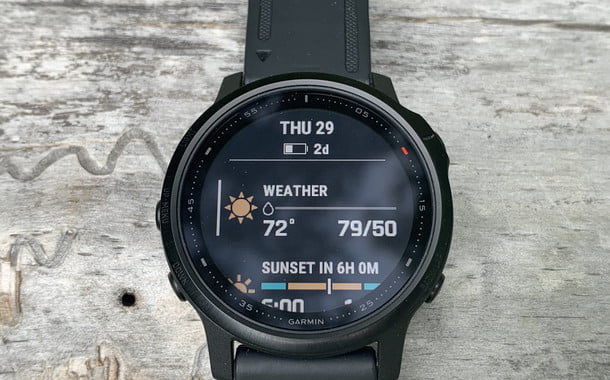 “Garmin’s Fenix 6S Pro beefs up its fitness features without losing its focus on outdoor adventures.”

The Fenix 6S Pro may be the smallest watch in Garmin’s new Fenix 6 series, but don’t let the small size fool you. The GPS watch is as rugged and full-featured as its bigger brethren. It has a pulse oximeter for measuring oxygen levels in your body, a useful new PacePro metric, music, and navigation.

All this and more is packed into the watch’s comfortable 42mm frame. I’ve been testing the $700 Pro version of the Fenix 6S, which includes music, maps, and Wi-Fi, to see how it compares to previous Fenix models and the competition.

Before diving into the features, the biggest improvement on the Fenix 6 Series is the revamped interface, which still maintains Garmin’s characteristic look and feel. The new and improved default clock face neatly arranges all the significant metrics like temperature, barometer, altimeter, heart rate, and battery life right on the front screen. The data is large enough that you can easily see it but compact enough that it doesn’t get in the way of the time and date.

I like the look so much that, for the first time, I haven’t felt an urge to change the clock face from the default setting. I like the little tweak to the battery meter, too. It now displays the number of days left before you have to charge, which, to me, is significantly more useful than a percentage.

The Fenix 6S Pro also has a new row-based widget interface, which is markedly different from the full-screen widgets in previous Fenix models. Instead of scrolling through several distinct screens, the widgets are arranged in rows that allow you to see the previous and next rows as you scroll.  Each row provides a summary of the data, and you can select the row to view additional details. Because the Fenix is an outdoors-focused watch, the widgets include weather, sunset/sunrise times, a digital compass, as well as traditional fitness metrics.

Don’t like the defaults? You can change the metrics shown and their order as desired. It’s much simpler and more customizable.

Subtle design tweaks for the better

What’s inside may have changed, but physical looks are largely intact on the Fenix 6S Pro. The company stuck with its traditional 5-button design and rugged fiber-reinforced polymer casing, It looks and feels like a Garmin watch.

To protect the display, Garmin did away with the chemically-strengthened glass material and replaced it with Gorilla Glass 3, but you now can choose between Gorilla Glass 3 or the more expensive sapphire crystal for their display lens material. I have not been able to test the long-term scratch-resistance of the display material, but Gorilla Glass 3 is on low-end phones and should protect you from the occasional rustle and tumble, but it’s still glass. Sapphire is what’s on expensive watches and is a much more tougher material. If you frequently scuff up your watches while outdoors, the sapphire model is worth shelling out for.

The Fenix 6S Pro is the smallest watch in Garmin’s Fenix lineup, measuring 42mm for the case and weighing 61 grams. It is slimmer and lighter than previous Fenix watches, but it is still a rugged watch. When you first wear the Fenix 6S, you can feel the weight of the watch on your wrist, but it’s not so heavy that it’s burdensome; in fact, it’s quite comfortable. I wore it running, hiking and swimming and quickly adapted to the weight. I didn’t feel slowed down at all by the watch.

The buttons also sit nearly flush with the casing, and I didn’t have issues with them digging into my wrist. It’s a nice change from previous Fenix models, where the oversized buttons were quite literally painful. Despite having smaller buttons, they are still easy to locate them without needing to look at the watch.

Garmin not only added new fitness features, but it also migrated existing features, like body battery and training load focus, to the 6 series. What you end up with is a well-rounded watch that does almost everything.

New to the Fenix 6 Series is a feature called PacePro, which is a digital version of pace bands worn by marathoners and other long-distance runners. Instead of manually calculating split times and target paces for each mile or lap in a course, the Garmin Connect app does it for you. Best of all, the app not only looks at the distance, but also takes into consideration elevation when determining your pace and split times.

PacePro was immensely useful during my runs, keeping me focused on a single lap at a time.

When you are ready to run, you can load this PacePro data and use it to monitor your pace in real-time. The display will show your target split pace, your current split pace, and how far off you are from your overall goal. You also can see the distance remaining on the current split. PacePro was immensely useful during my runs, keeping me focused on a single lap at a time instead of the total length of my run.

The Fenix 6S performed flawlessly on my first few trial runs. I compared it to a Forerunner 945 and the Coros Apex, and all the essential metrics — heart rate monitoring, GPS distance, and pace — were spot on across the board. Like most Garmin watches, there is an abundance of data screens, and you can customize them to view the metrics you need the most.

Garmin packs a ton of power-hungry features into its Fenix series, but the company somehow manages to deliver reasonable battery life in its watches. The Fenix 6S Pro lasted over a week in smartwatch mode and a solid six days when exercising every day for an hour. To help users manage battery life more effectively, Garmin now displays the battery meter as the days remaining instead of a percentage. Instead of guessing when to charge, I was able to plan my charging around my training and racing schedule.

Garmin also added battery modes that allow you to switch power settings on the fly when you need more battery life. More than once, I let my battery drain during testing and was able to eke out a 10K run with less than 5 percent battery remaining thanks to these reduced power modes.

Garmin’s Fenix 6S Pro is available now on Garmin’s website and other online retailers such as Best Buy and Amazon. The 6S Pro is one of the cheaper models in the Fenix 6 series, but it is still costly with a starting price tag of $700. Fenix watches are geared towards outdoor adventurers and have outdoor-centric features and a rugged design. As a result, they tend to be more expensive than the Forerunners and other similar fitness-focused smartwatches.

Garmin’s new Fenix 6S Pro may be the smallest model in the Fenix series, but don’t let that dissuade you. It is as rugged and almost as full-featured as its bigger brethren. It has a compact design, refined interface, and useful new features that make it attractive to folks looking for a fitness watch with a strong outdoor focus.

The only knock I have against it is its weight. At 58 grams, It’s noticeably heavier than similar-sized GPS watches like the Coros Apex (50g) or the Garmin Forerunner 245 (38.5g). If most of your activities involve running, then you may want to trade some of the outdoor-specific features of the Fenix for the lighter profile of the Forerunner 245. Likewise, triathletes who run, bike and swim may be better served by the Coros Apex.