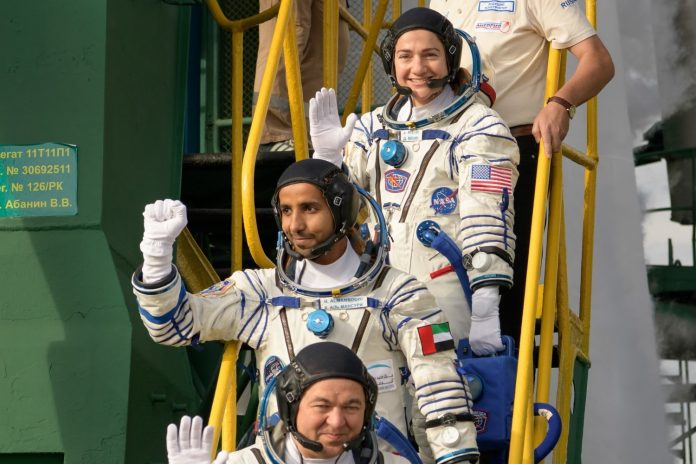 Three astronauts launched Wednesday to the International Space Station (ISS), including the first astronaut from the United Arab Emirates (UAE).

The UAE’s Hazza Ali Almansoori, who is joined by Jessica Meir of NASA and Oleg Skripochka of Russia’s space agency, Roscosmos, launched for an outpost from Kazakhstan as part of Expedition 61, NASA said.

Almansoori is one of only two astronauts with the Emirati Space Agency and will make the UAE the 40th country to fly one of its citizens into space to the ISS.

“I am proud to be the first astronaut in orbit on the ISS from the United Arab Emirates and from an Arab country,” AlMansoori said during a press conference on Tuesday. “It is really an honor and I am looking forward to making this mission successful and to come back with a lot of knowledge and a lot of experience that I’ll share with everyone.”

Almansoori, who was selected for the UAE program out of over 4,000 applicants, will spend eight days on the ISS, performing experiments with the rest of the crew and live broadcasting back home to his country.

The UAE itself has been working towards a July 2020 launch of its Mars probe and hopes for it to arrive at Mars in 2021, around the time of the UAE’s 50th Anniversary.

NASA said it would broadcast the group’s arrival at the space station on NASA TV that starts at 12 p.m. PT.

The astronauts aboard the ISS spend their time conducting experiments and performing regular maintenance on the space station.

“It is a unique responsibility and a unique opportunity to bring aboard the station the first astronaut from the United Arab Emirates. Not that we’re flying him; he’s going to work as a full-fledged crew member of our crew,” said Skripochka at Tuesday’s press conference before the launch. “But it does bring a certain level of attention to our crew. It is a historic event to say the least.”