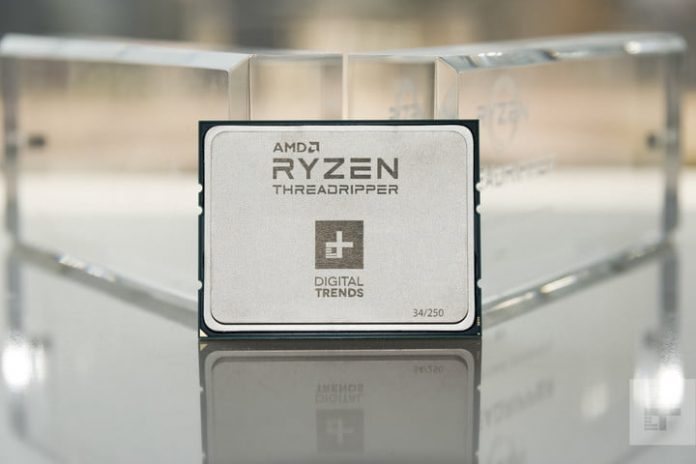 A new benchmark for a 10-core Intel Cascade Lake X CPU, the Core i9-10900X, has appeared on the Geekbench database and it’s a strong performer. With 10 cores and 20 threads, it has single-threaded and multithreaded scores that are higher than even the supremely powerful, 28-core Intel Xeon W-3175X.

But none of this matters if AMD’s Threadripper 3000 CPUs prove to be as capable as their leaked benchmarks show. A new benchmark for a 32-core Threadripper 3000 “Sharktooth” CPU echoed earlier results with a single core and multicore score that takes a commanding lead over what the new Cascade Lake X chip is capable of.

AMD’s Threadripper CPUs have been nipping at Intel’s high-end desktop (HEDT) heels for several generations. The first-generation showed that high-core-count CPUs didn’t have to be expensive and the second showed that stacking extra cores (up to 32 on the 2990WX) could give Intel’s faster, but lower-core-count chips a real run for their money.

Based on the same Zen 2 architecture as the mainstream Ryzen 3000 chips, Third-generation Threadripper processors should have the same major improvements in instructions per clock and memory efficiency, as well as a modest improvement in clock speed. All of that allowed the 32-core Threadripper chip, with its max turbo speed of 4.3Ghz, to hit a single-core score of 5,519 in the Geekbench results. In comparison, the 10-core Cascade Lake X processor, with its higher 4.4GHz clock speed, managed just 5,204, as per WCCFTech.

That’s perhaps an unfair comparison, considering the core count differences, but the most likely top-tier offering of the Cascade Lake-X generation is an 18-core replacement of the 9980XE, which just isn’t going to be enough to close that performance gap. At least as far as Geekbench results go.

Cascade Lake-X is designed to replace the existing Skylake-X lineup of 9000-series Intel HEDT chips. Since it’ll be based on a refined version of the same 14nm process, we don’t expect major improvements in its performance or capabilities. With that in mind, this 10900X is likely the entry-level model, with 12-,14-, 16-, and 18-core alternatives all with roughly similar clock speeds.

Typically, all Intel HEDT chips feature the same single-core boost clock, with all-core clocks being slightly higher on the chips with lower core counts. If that proves true with the 10-series Cascade Lake X chips, we wouldn’t expect any of them to have much greater single-threaded performance than we see here, barring a slight bump in clock speed over what is likely an engineering sample in this benchmark.

That puts AMD in a commanding position when it comes to next-generation workstation desktops. Both upcoming generations of Intel and AMD CPUs are expected to make their appearance before the end of the year, so are likely to go head to head in the HEDT space. If that turns out to be true, though, performance per dollar will certainly rest with AMD’s new Threadripper CPUs.

Intel wouldn’t be out of the running entirely, though. Its new chips will still likely run at a lower TDP than AMD’s, making them a viable solution in smaller, high-powered workstations. They will also likely benefit from an expansive existing install base. Cascade Lake X is expected to be supported by existing X299 motherboards and the LGA 2066 socket, so an upgrade to 10th generation will be cheaper than converting to AMD, even if the performance increase isn’t likely to be dramatic.