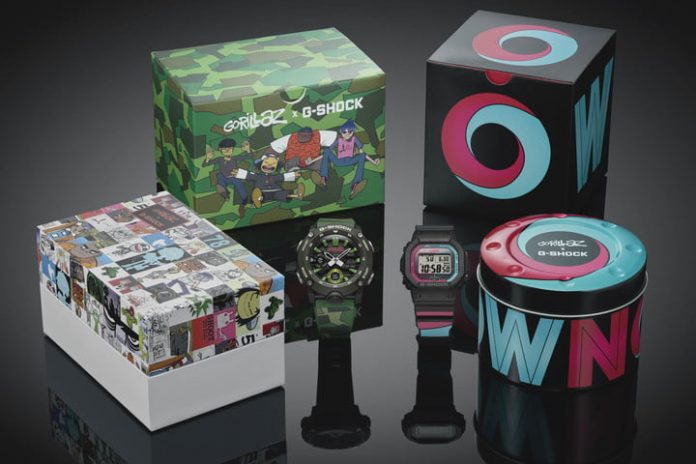 You can’t keep a good Gorilla down, and to prove it, British band Gorillaz and Casio G-Shock are back with another two limited edition watches, following up on last year’s highly successful collaboration. The really good news is that one of the two new models has Bluetooth connectivity, giving an extra high-tech edge to the exciting lineup.

The connected Gorillaz special edition is a version of the DW-5600, one of the true classic G-Shock designs. Casio says the watch will link up with its own app, which we’ve found to be reliable and is especially great because it stores all your different watches after linking them once, but has not stated the features that will be available. Expect to see solar charge information, the ability to set the world time, and activate timers too.

Influenced by the designs and colors used for the Gorillaz recent The Now Now album, the DW-5600 looks very striking in blue and pink, while the word Now appears on the screen when the backlight is activated, and can be found on the keeper too. The case back is also engraved with The Now Now’s logo. It comes in a custom G-Shock metal tin, also decorated in the same colors complete with the Now Now text. It’s as we expect from G-Shock: A good-looking, highly collectible special edition.

It’s joined by a second watch, this time modeled on the GA-2000. One of the first limited editions made using the new GA-2000 platform, the design is inspired by the Gorillaz first album, and comes in a camouflage finish along with two different straps. The GA-2000 is notable in the G-Shock range for having a quick release strap, and the pack contains both a matching camo-print version and a darker military style too. It does not have a Bluetooth connection, though.

It’s no surprise to see G-Shock and Gorillaz return for a second outing, as the original collection sold out in a short time after release in October 2018. G-Shock has repeated collaborations before, including those with sportswear brand Burton, and conservation group I.C.E.R.C. The new Gorillaz watches will be released in limited numbers on September 18, and cost 150 British pounds, or about $185. You’ll be able to pick one up online through the G-Shock store, or from the Carnaby Street retail store in London.