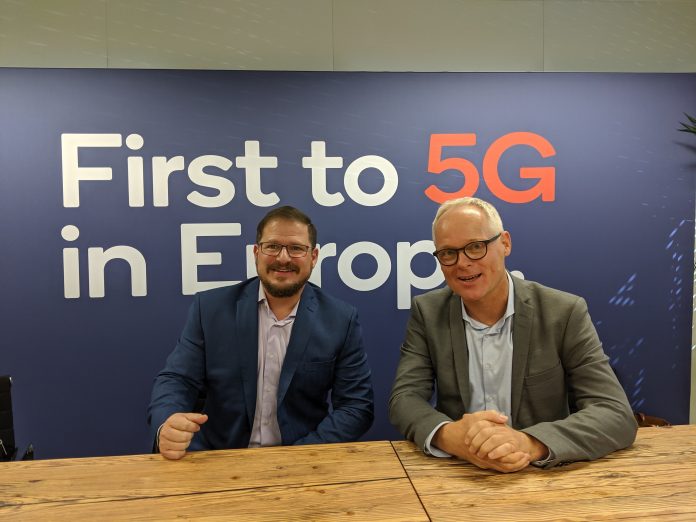 From Reinhardstrasse to Scheidemannstrasse in the heart of Berlin, there’s simply no parking right now. You’ll know this if you drive those broad boulevards, of course, but you’ll also know it if you get into any BMW in the city. Because citywide, almost every BMW cruising the streets of Germany and elsewhere in Europe is using ultrasonic sensors to scan for parking spaces — and tell nearby cars where there’s a spot.

“It’s got to be real-time, and it’s got to understand weekdays, and workdays, and so on,” explains Christoph Grote, senior vice president of Electronics at BMW. But beyond that, you need huge amounts of bandwidth and tons of processing power. “Because if there’s a gap, and that gap is always there, then probably it’s not wise to put your car there. Because it’s an entrance to a building or something,” Grote says.

It’s just a pilot program right now, one of many intriguing ways modern cars are using data. BMW vehicles can also relay data about speed limits: Did you miss a sign that was obscured by overgrown foliage or otherwise blocked? If you’ve got cruise control on, your car might slow down anyway, because another car spotted it and relayed that info to you.

A deluge of data

The sheer volume of data being used by modern cars is astounding, Grote explained. BMW’s fleet is currently sending 250 terabytes of data into the cloud per year in mapping data alone. There’s not enough bandwidth to send raw data, so the cars only transmit info when there’s something interesting – a slowdown, perhaps, or the rare parking space near the Reichstag or the Brandenburg Gate.

Grote would prefer to send raw data, but that would be a leap to about 10 petabytes per year. Handling that volume of data will require next-gen processing power and connectivity. It’ll require the 5G network.

At a keynote presentation on Thursday during IFA 2019, Qualcomm President Cristiano Amon and Grote announced plans to evolve future vehicles with 5G, which will push next-generation connected cars even further, building beyond Bluetooth and telematics into connected services, connectivity for you and your devices, streaming movies for your passengers, and more. And in an exclusive discussion before the keynote, the pair talked about what 5G can bring to the connected car.

“By the end of 2020, about 2.2 billion people on Earth will be under 5G coverage,” Amon says. By 2021, he anticipates coverage that matches the existing 4G network. “And then you do have the foundation to build all of those new automotive use cases because, you know, you’re going to have coverage.”

The BMW Vision iNext. The company was coy, but this might be the world’s first 5G vehicle — when it comes out in 2021. BMW

Getting the right degree of coverage is key to convincing consumers to buy into the services, to depend on networking for critical things that impact your safety in the driver’s seat. Studies show consumers are already fearful of self-driving cars; if those cars depend on a network, and you hit the edge, what happens?

Amon argues that an issue some see as a challenge for 5G is actually an enormous opportunity: It’s called densification. Range is a challenge for some of the networks that carry 5G radio signals to you, leading to fears that 5G base stations will be plopped into parks, strapped to sign posts, and generally clutter the heck out of the environment. (Ideally, they’ll be invisibly strapped to street poles rather than radio towers dumped on the sidewalk.)  And while it’s true that there may be an increase in radios, more of them makes coverage denser, and densification means the network is more reliable. Reliable enough for cars, he says.

“You end up having in the 5G era — when it’s mature — a much more dense network, and you’re going to get redundancy of coverage on the network as well,” Amon noted.

So what will that future look like? One big opportunity lies in vehicle-to-vehicle communication, where information not just about available parking spaces, but about traffic accidents, speed limits, pedestrians in crosswalks, and even the position of cars in adjacent lanes, is shared. The tech industry calls this C-V2V, for cellular vehicle-to-vehicle communication, or better yet C-V2X, for communication to x … to anything. Part of that hinges on 5G, and part of it lies in a new chip, the QCA6696, and Qualcomm’s connected car reference platform, which the company unveiled earlier this year.

There’s been talk about building a separate system for all of this connectivity, a dedicated one just to allow cars to chatter. In a word, that’s stupid, says Grote.

“We have to say – sorry to say — this is utterly stupid to build a dedicated infrastructure in the ages of 5G and IoT after a lot of talk becoming real,” he said.

So what new experiences will we see in the cockpit? Amon sees a future where car companies act like cable companies, providing a wealth of connected services, from Netflix and other streaming services (for passengers, of course) to streaming music to data sharing between vehicles.

“When you connect a car to the cloud, the car could become a hub for different services,” Amon said. No one’s bringing CDs into their cars these days, everyone’s already streaming music to the infotainment system. “Eventually, with rear-seat entertainment screens, I can see the content coming in and the car company playing the role of a cable operator.”

When it comes to brass tacks, however, neither Amon nor Grote wants to commit. Which BMW exactly will be the first 5G vehicle? It’ll definitely be one of them, but Grote, with a smile, declines to name name. And which chip (or chips) specifically will be under the hood? No comment. Given the 2021 time frame Amon mentioned, the smart money is on the BMW iNext, the company’s tech flagship, which is supposedly entering production in 2021. The car is a rolling showcase of automotive technology: It’ll be electric, it’ll drive itself in certain conditions, and it’s meant to come packing state-of-the-art connectivity features.

To hear Qualcomm and BMW tell it, the future is pulling up to the curb any minute – so lose that Uber app. It’s time to get back in the driver’s seat. And 5G will pave the way.